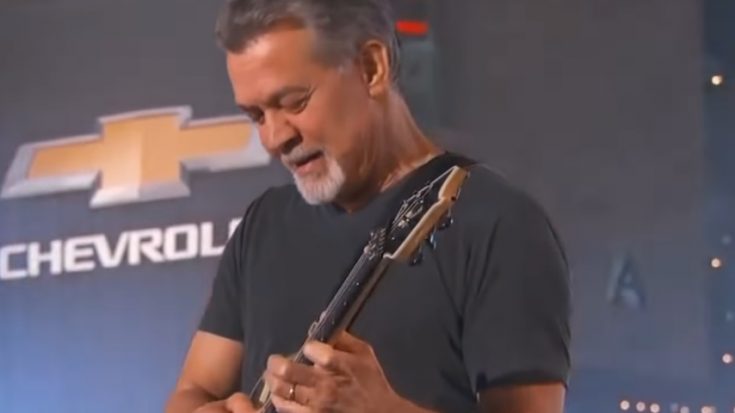 The world lost a legend when the revolutionary axman by the name of Eddie Van Halen passed away on October 6, leaving a mourning world devoid of yet another great rock star. Considered to be one of the most defining artists of his era and beyond, Eddie Van Halen was responsible for trailblazing a whole new breed of guitarist, much like a contemporary Jimi Hendrix of sorts. Popularizing finger tapping thanks to his technical and melodic approach, the younger Van Halen became an instant guitar deity in his own right. In celebration of Eddie’s fruitful life and career, here are some of his most unforgettable solos.

When asked what his favorite solo was on the Van Halen record, EVH turned to “I’m The One”. He dishes out a cornucopia of styles including rhythm and blues, boogie, jazz even, in the solo for this cut. The seeming randomness of it all made sense when put together linearly, but what’s even more surprising is that it was made in the spur of the moment.

If there’s one EVH solo to end all debates, it’s surely “Eruption”. In a track that doesn’t even go past two minutes, Eddie goes ham with the fiery finger tapping that results in a neoclassical arpeggio attack that doesn’t even take a whole lot of string pyrotechnics to show how exhilarating this cut is.

The Linda Ronstadt standard was borrowed by Van Halen for Van Halen 2, and boy did Eddie do a whole lot of reimagining. The axman made sure his signature bends and scale runs were included in the solo, along with the timeless tapping and bend combinations to end it.

Most EVH wannabes make a huge yet common mistake – focusing too much on creating a solo that you essentially forget if it’ll compliment the entire arrangement. He dishes out a brief pop-oriented solo then backs out as David Lee Roth takes the spotlight, EVH backing him up with tasty licks and riffs.

The synthesizers on the band’s 1984 album was a disaster waiting to happen – except it didn’t. Eddie’s classical training allowed Van Halen to bring out the best of both guitar rock and synths into a recognizable formula for hardcore fans yet having a reach on the general public as well.

Van Hagar was definitely a different dish versus the DLR era. One of the most highlighted songs from Hagar’s run with the band is 1991’s “Right Now”. It’s a good thing that EVH stayed true to the band’s hard rock credo with a pretty heavy solo with hints of funk and metal in the mix.

Even a guitar hero like Eddie had someone to look up to, Eric Clapton being the one he’s most vocal about. His amazement with Cream-era Clapton and the entire band itself, mirrored by Alex and Michael with Eddie doing bluesy runs and speedy arpeggios on this tune.

“Mean Street” is already mean enough with its main progression’s brooding atmosphere, but when Eddie enters the solo section, the listener is taken to his dark place. Piercing, shuddering, and grungy – the solo manifests the overall mood of the song thanks to EVH’s amazing guitar manipulation and musical sense.

Who could forget the ignited solo of Michael Jackson’s “Beat It”? While renowned session musician and Toto guitarist Steve Lukather was the primary guitarist of the song, producer Quincy Jones wanted no other than Eddie himself to play on the solo. And boy was he right. Eddie’s knack for super-fast picking and edgy runs captured the defiant air of the song perfectly.

Eddie’s classical training bore fruit with Van Halen II’s “Spanish Fly”. Instead of the usual setup, he used a nylon-string guitar on which he dished out his signature tapping technique in conjunction with a flamenco-influenced barrage. It was also a statement that EVH was beyond imitation, and he was more than the lightning-fast tapper of rock music.