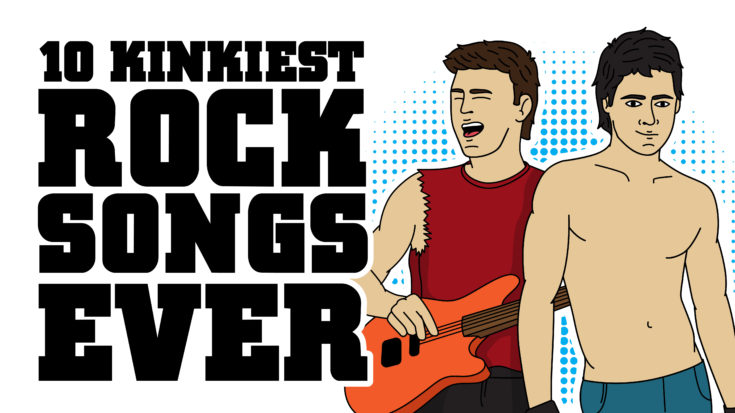 Spice Up Your Sex Soundtrack

Are you really a rock star if you don’t sing about the dirty deed? Sex and drugs are common themes in rock ‘n roll. For some, the message is subtle but for others, well let’s just say it’s the total opposite. Whether you want it just sensual and teasing or suggestive and incites anticipation – we have just the right list to help you update your sexual soundtrack.

“And if I had the sun and moon, we will shine them
I would give you both night and day of satisfyn’…”

As if the title alone isn’t kinky enough. Paul Rodgers was only 19 years old when he wrote this raunchy ballad in California while on tour with Free. He has never revealed who the subject of the song is and well, we’re fine with that. But for the record, he did say that his inspiration was someone he met at the time.

“I was about 19 and touring the US with Free, so the song actually stayed on the back burner all the way until the start of Bad Company in 1973. And I did feel like making love at the time. I think I probably was in love – that happened a lot.” – Paul Rodgers

He played it to Mick Ralphs who is responsible for the “big chord in the chorus.” It’s good ‘ole fashion rock ‘n roll with just the right amount of sexiness.

“God knows what I’m on about on that song. It’s such a mishmash. All the nasty subjects in one go. […] I never would write that song now. I would probably censor myself. I’d think, ‘Oh God, I can’t. I’ve got to stop. I can’t just write raw like that.’” – Mick Jagger

Its original title was “Black Pu**y” but Jagger changed it because he thought it was too direct. We just can’t help but wonder what else was running through his mind back then.

“So we found this hotel,
It was a place I knew well
We made magic that night.
Oh, he did everything right
He brought the woman out of me,
So many times, easily…”

It’s one of those times when you’re like, “That escalated quickly.” It started out innocent enough as Ann picks up a hitchhiker then they went to a hotel and in the morning, she left him a note. One day, they saw each other again and she confessed she merely used him because he could give her what her husband couldn’t – we assume it’s a baby.

“We were just slamming through all these songs and this one popped out because, obviously, it’s really catchy. But it has a really controversial story to it, at least for that time.” – Ann Wilson

It doesn’t make that much sense if we’re honest. But this Heart anthem was a huge hit and was the only single from the duo which was certified Gold! Sex does sell.

“In the air, in the air, honey one more time not it ain’t fair
Love in an elevator
Lovin’ it up when I’m goin’ down…”

Raunchy isn’t new to Steven Tyler. The man likes all things naughty and crazy. And this song, you probably already figured it out, it’s about love and the kinky things that could possibly happen in an elevator. It’s Tyler so you know it’s going to be detailed whether you like to hear it or not.

“We were somewhere between Florida and Washington DC up on a roof pool party. And as it was back then, lots of weed and booze. I met a girl and we got in the elevator and went down and on the way, something happened. I was in a blackout. But I did come to when the door opened up and it was the lobby. People were standing there going… and then the door closed. It was a true moment, it happened.” – Steven Tyler

There’s no other song to better sum up Tyler’s virility in his youth than this one. And of course, the whole message is “sex” and doing the deed anytime anywhere.

Let’s just say this isn’t the kind of song you’d like to listen to when you’re in the car with your parents. It makes everything so awkward. You see, it’s not just sexy or kinky. When you look at the lyrics closely, it’s also pretty disturbing.

“That’s the all-time fuck song. Those are pure fuck beats – Trent Reznor knew what he was doing. You can fuck to it, you can dance to it and you can break shit to it. Since I’m engaged now [to Mayte Garcia], I’ll just say that the most memorable episode that I remember with ‘Closer’ took place on a swing.” – Mötley Crüe’s Tommy Lee

Take it from Tommy Lee who has been living a life of excess. If he says it’s the kinkiest song for him, you gotta believe it.

Stradlin wrote this track at his house and according to Slash, he was high as a kite thanks to heroin. It doesn’t matter if you’re not into bondage, this is a must-include in your kinky playlist.

Taking away the fact that this easily reminds us of Freddy Kruger with his burnt face and glove armed with razors (this track was featured on the 1988 slasher film “A Nightmare on Elm Street 4: The Dream Master”), this is a sexy and seriously kinky song. It wasn’t as shocking when Heart did it because at the height of her career, Sinéad O’Connor just didn’t have any f*cks to give.

“When you listen to a song you love, it can almost make the world stand still. It’s like everything’s black and white, except there’s this line of colour between you and whatever it is the music’s come from.” – Sinéad O’Connor

If you want to get it on without being too obvious, you can just plug this is and put the volume of max. You’d have to be made of ice to not feel anything after listening.

You know what, we pity anyone who thinks this is romantic. Although to be fair, it’s not that hard to get the double meaning especially with the verse: “And that’s not jewelry she’s talkin’ about / It really don’t cost that much…” We don’t need to expound because it’s pretty much self-explanatory. It doesn’t take a genius to figure it out.

“There is an advantage to being last in the record bin. I think when Tipper Gore got to Zappa, she just got so disgusted she didn’t go any further.” – Billy Gibbons on getting away with filthy lyrics in their songs

This isn’t the first time the world heard dirty words disguised as sweet sounding music. If you need another example, take this line: “She’ll shoot you full of love till your love bone aches.” And yes, that doesn’t need explanation too.

“Why don’t we do it in the road?
No one will be watching us…”

Imagine Paul McCartney with this stunning good looks and those pair of puppy-dog eyes asking you why don’t you do it in the road not once or twice but 15 times? As one of the greatest songwriters of all time, he obviously gets inspiration from anything and everything. And in this case, he was inspired to write the track after seeing two monkeys having a quickie on a street in India.

“A male [monkey] just hopped on the back of this female and gave her one, as they say in the vernacular. Within two or three seconds he hopped off again and looked around as if to say “It wasn’t me!” and she looked around as if there’d been some mild disturbance … And I thought … that’s how simple the act of procreation is … We have horrendous problems with it, and yet animals don’t.” – Paul McCartney

It may have only two repeating lines but at times like this, you don’t really have that much to say.

1. The Velvet Underground – “Venus in Furs”

It’s the kinkiest song of them all. It was inspired by a novella of the same name which told tales of sadomasochism and female dominance. The song has the same themes in addition to bondage and submission as you can see in the verse taken above. Lou Reed sings about sexual power and it’s perhaps the most provocative track you’ve ever heard.

“There is no intro or buildup to the song; the track starts as if you opened a door to a decadent Marrakesh S&M/opium den, a blast of air-conditioned Middle Eastern menace with a plodding beat that’s the missing link between “Bolero” and Led Zeppelin’s version of “When the Levee Breaks”.” – Erich Kuersten, “Venus in Furs by the Velvet Underground”

So basically if you want to spice up your playlist, it’s a sin not to include this classic.