10 Hottest Rockstar Daughters You Have To See 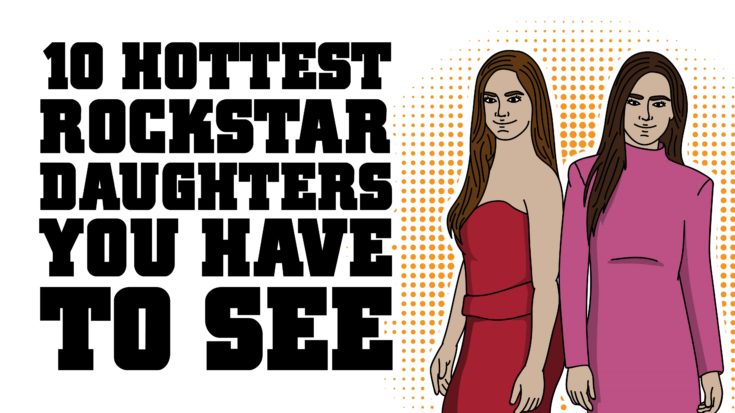 We have just the thing to make you feel old and in a way, extremely weird. Remember those rock gods you bowed down to in your youth? Well their kids are all grown up now and for those really lucky guys, their offsprings aren’t just talented but drop-dead gorgeous too – we’re talking found-your-jaw-on-the-floor stunning.

P.S. Most of them are already forging their names in their respective industries.

Nicole Richie is one of the most well-known rock star daughters. She’s been gracing our TV screens since 2003 with her reality show “The Simple Life” where she starred alongside fellow socialite and close friend Paris Hilton. She’s funny and outspoken and for the five-year run of the series, she was able to attract media attention to her personal life.

She’s also an author and a designer with her brand “House of Harlow” which started as a jewelry line and eventually included apparel and shoes.

She’s a popular actress who’s well-known for playing the role of Jessa Johansson in the American TV series “Girls.” Her mother Lorraine owns a vintage boutique in New York City called Geminola which provided numerous outfits to the show Sex and the City. When she was a teen, Jemima wore clothing for her mom’s store during her feature in Teen Vogue.

“There was always music on in the house. You would think it was my dad’s [Simon Kirke, drummer with classic rock acts Bad Company and Free] influence, but it was actually my mum – my dad likes quiet and my mum likes to have music playing in every room!” – Jemima Kirke

She also starred in several music videos including Mick Jagger’s “Gotta Get A Grip.” And she looked so fine – ‘hot’ doesn’t even cover it.

She doesn’t need any introduction people. Unless you’ve been living under a rock or on a remote island, you’d know she’s the offspring of Aerosmith frontman Steven Tyler. But maybe everyone can relate to our initial shock when we learned she’s his daughter. With all his wild and crazy antics, you can’t help but ask, “HOW?!”

“When I realised that Steven [Tyler, Aerosmith vocalist] was my father, it was a moment that was bigger than me, it was almost spiritual. When you meet kin, there is an energy and sparkle between your bodies. It must be chemical somehow – DNA and genes. I felt a connection in a very strong way when I met him as a little girl and I didn’t know why at first, but I figured it out rather quickly.” – Liv Tyler

Liv also shares adorable moments with Steven and let’s be honest, he’s the cool dad and grandpa we’d all love to have.

We all know her when she was just a little girl and in fact, there were already rumors even before she was born – that Courtney Love was using heroin during her pregnancy. It even escalated to the point where the child welfare services took her from her parents at two weeks old but she was eventually returned to their custody.

“I don’t really like Nirvana that much [grins]. Sorry, promotional people, Universal. I’m more into Mercury Rev, Oasis, Brian Jonestown Massacre [laughs]. The grunge scene is not what I’m interested in. But “Territorial Pissings” [on Nevermind] is a fucking great song. And “Dumb” [on In Utero] – I cry every time I hear that song. It’s a stripped-down version of Kurt’s perception of himself – of himself on drugs, off drugs, feeling inadequate to be titled the voice of a generation.” – Frances Bean Cobain

Aside from singing and modeling, she also holds art gallery shows. It was even reported that she turned down the role of Alice in the Tim Burton film Alice in Wonderland.

We may be fond of making jokes about Keith Richards surviving the apocalypse but he’s getting the last laugh because apart from being a legendary rockstar with a net worth of $340 million and basically outliving everyone, he has something else to boast about – two gorgeous daughters from model Patti Hansen who were able to carve a successful modeling career following their mother.

“Dad could be strict with us, and it was often over small things such as ‘no singing at the dinner table’. When it came to boyfriends, he was usually great, but there were ones who were too scared to talk to him or just too eager. When I was 16, I’ll never forget the time he said to one of them, ‘Cut it out, or I’ll cut it off.’” – Theodora Richards

She sings and plays the piano. Even if she didn’t exactly follow daddy’s footsteps because she’s no rockstar, she’s still making a name in the modeling world just like her mother who was one of the highest paid models back in the ‘80s. Some of the brands on her portfolio include River Island, Moschino, Dior, Chanel, Pantene, Myla Swimwear and she recently became the face of Forever 21.

She’s also graced the pages of Vogue Italia, Cosmopolitan US and Harper’s Bazaar to name a few.

“We are all quite musical in my family — all of my sisters sing and I play the piano. That said, I probably wouldn’t go into music. I like to keep the music to myself. I love getting on the piano by myself and losing myself in a bit of Chopin.” – Amber Le Bon

You know what else makes her hotter? She likes science and photography. Guard your hearts gentlemen!

With model Jerry Hall as mother, she started forging her name in the industry by modeling for Vivienne Westwood, Miu Miu, Chanel, Versace, and Hudson Jeans. In 2012, she represented British fashion in the Summer Olympics closing ceremony alongside Naomi Campbell, Kate Moss and Lily Donaldson. She even collaborated with brands like Mulberry and Volcom. But while growing up, she would often travel with The Rolling Stones during tours.

“I think I always knew that they were quite relevant as far as clothing and stuff, I’ve always looked up to their style and I think of that whole period — the ’60s and ’70s — as being one of the most amazing.” – Georgia May Jagger

Like her father, she may be on top of the world but everyone knows how humble and down-to-earth she is. Some of her closest pals include Suki Waterhouse and Cara Delevingne who are making it big in Hollywood too.

Most of those on this list are models or actresses. The Boss’ only daughter is on a whole different path – she is a show jumping champion rider. She did, however, have a short modeling stint and was even Gucci’s equestrian ambassador. She’s been riding horses since she was four years old and at six, she received her first pony. Talk about the perks of being Bruce Springsteen’s offspring!

But hey, she’s very much determined to step out of daddy’s shadow and make her own mark.

“So they always really pushed me when I needed to be pushed and it was really helpful. They really just taught me that it’s so rare to be passionate about something in life so when you find that passion to really pursue it and to work hard at it. I couldn’t be where I am today without them.” – Jessica Rae Springsteen on her parents

In 2012, she was part of the US Olympic team and just this year, she competed at the Athina Onassis Horse show. And her hotness meter just went even higher!

Here’s another child blessed with good genes – Lily Collins is more than just a pretty face. She’s a model, writer and an actress. She has several memorable movies under her belt and this year, she’s had several films and TV shows like “To The Bone,” “The Last Tycoon” and “Okja.” And of course, she released her novel Unfiltered: No Shame, No Regrets, Just Me which was met with critical praise.

“I forgive you for not always being there when I needed and for not being the dad I expected. I forgive the mistakes you made. And although it may seem like it’s too late, it’s not. There’s still so much time to move forward.” – Lily Collins’ open letter to dad Phil

She’s a real stunner and extremely talented too. And if that’s not enough, she’s an anti-bullying advocate and is even the celebrity ambassador of Bystander Revolution.

She is hands down one of the most beautiful women you will ever behold. Anyone who disagrees needs a new pair of eyes. She’s been in several blockbuster movies like The Divergent Series, X-Men: First Class and Mad Max: Fury Road.

But when she’s not busy acting, she’s also fronting her own R&B/electropop band – Lolawolf. Yes, she’s ridiculously cool without even trying!

“When I was younger, I really wanted to prove to people I was a normal human being, that I was cool, chill. When kids were mean, the first thing they’d say is, ‘She thinks she’s so fucking cool because her dad is famous,’ I just wanted to fit in.” – Zoe Kravitz

It goes without saying that she’s genetically blessed. In case you’re not aware, she and her mom Lisa Bonet (who’s currently married to Jason Momoa by the way) could totally pass off as twins!