10 Most Groundbreaking Albums That Changed The Game 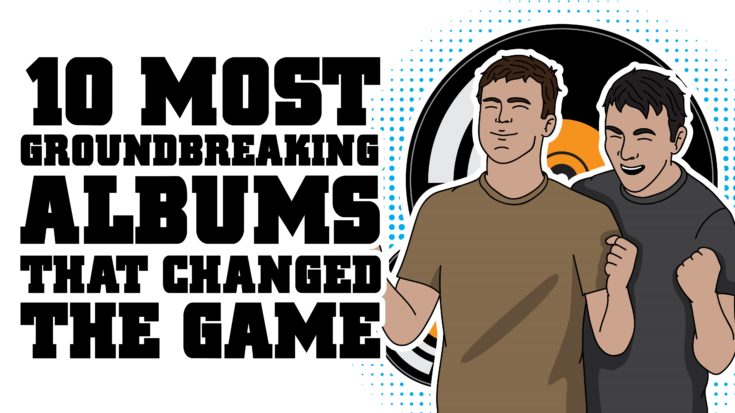 Once in a while, some musical geniuses come together and put out records that become the basis for how the next rock albums get judged. They challenged rules, broke boundaries and essentially did what no other musicians at the time ever thought of doing. They took risks that paid off nicely.

Now let’s look back at some of these groundbreaking albums that changed the course of rock music.

It’s one of the best records that punk rock has to offer. And after its release, it became an instant classic. The Clash experimented by incorporating a wide array of musical styles like hard rock, pop, R&B, reggae, rockabilly and lounge jazz to name a few. It was unheard of especially coming from an essentially punk group.

“Joe, once he learned how to type, would bang the lyrics out. Then I’d be able to bang out some music while he was hitting the typewriter.” – Mick Jones

The album artwork of bassist Paul Simonon smashing his guitar is iconic too. For most people, that moment basically screams rock ‘n roll and we totally agree. Everyone was blown away with the raw and primal energy of the record and how, in their third LP, they were finally able to find their style and sound. Selling more than five million copies worldwide, it was a huge win for The Clash.

9. David Bowie – “The Rise and Fall of Ziggy Stardust and the Spiders From Mars”

Almost everything David Bowie did was earth-shattering and groundbreaking. Rules didn’t apply to him whether it’s fashion or music. He was a trend-setter and with this album, he was also able to influence the next generation of musicians.

Before him, who would have thought that it’s even remotely possible to mix glam pop and hard rock?
Bowie didn’t just give us a record filled with memorable music, he actually presented an alter ego! No one else does it like him.

“It sounds like a cliché, but to an entire generation this album has become a yardstick by which to measure all others. Why the hyperbole? Because the strength of Ziggy lies in its completeness. Not a track is out of place, in fact not a NOTE is out of place.” – BBC’S Chris Jones

It’s epic from beginning to end. And with Bowie’s magic touch, there’s an otherworldly feel to it – hence the title.

The debut studio album of the group credited for defining the punk rock sound, no ‘groundbreaking’ list would be complete or legit without this. Clocking it as less than 30 minutes and recorded for only seven days, their back-to-basics and no-frills approach to music just made them legends.

They weren’t posers. They were weird kids and misfits and they sang about it which made them relatable and real (not just rockstars on posters and album covers).

“Doing an album in a week and bringing it in for $6,400 was unheard of, especially since it was an album that really changed the world. It kicked off punk rock and started the whole thing—as well as us.” – Joey Ramone

They were on another level. Every song was a work of art and years later, they continue to influence musicians of the same genre. It may not have been commercially successful when it was first released, but in 2014, it was certified gold.

Some albums are great but they’re acquired taste. For Pink Floyd’s eighth album, everyone who has heard it will agree that it’s groundbreaking, innovative and the epitome of musical perfection. This record is the culmination of their complex experimentations.

From the songwriting to the production and performance, Pink Floyd took everything to another level. The musicianship is just astounding.

“… I think that when it was finished, everyone thought it was the best thing we’d ever done to date, and everyone was very pleased with it, but there’s no way that anyone felt it was five times as good as Meddle, or eight times as good as Atom Heart Mother, or the sort of figures that it has in fact sold. It was … not only about being a good album but also about being in the right place at the right time.” – Nick Mason

Masterpiece is an overused word but there’s no other way to describe this record. In 2017, it might as well have been released yesterday because it continues to kick ass and makes it a crime not to play it on max volume.

The credit goes to Led Zeppelin for bringing hard rock music to the forefront with their eponymous debut studio album. Unlike other bands who experiment and find their distinctive sound in the succeeding records, Led Zeppelin found theirs from the onset.

Part of the reason is obvious: individually, the members of the group were already rock gods. But together, they became unstoppable.

“For material, we obviously went right down to our blues roots. I still had plenty of Yardbirds riffs left over. By the time Jeff [Beck] did go, it was up to me to come up with a lot of new stuff. It was this thing where [Eric] Clapton set a heavy precedent in the Yardbirds which Beck had to follow and then it was even harder for me, in a way, because the second lead guitarist had suddenly become the first. And I was under pressure to come up with my own riffs. On the first LP I was still heavily influenced by the earlier days. I think it tells a bit, too… It was obvious that somebody had to take the lead, otherwise we’d have all sat around jamming for six months. But after that, on the second LP, you can really hear the group identity coming together.” – Jimmy Page

When it was released, everyone agreed it was unlike anything they’ve ever heard before. Now there’s a way to “arrive” at the rock music scene.

If you love heavy metal, you have these gods to thank for forging the first sound that gave birth to this genre. From Ozzy Osbourne’s impressive shrieking coupled with his “Prince of Darkness” persona to Tony Iommi’s blazing guitar riffs, the boys probably had no idea they were starting another fandom – the metalheads.

“I’d play a load of chords and I’d have to play fifths because I couldn’t play fourths because of my fingers.That helped me develop my style of playing, bending the strings and hitting the open string at the same time just to make the sound wilder.” – Tony Iommi on achieving that massive and heavy sound via interview with Mojo

It’s interesting to note though that upon its release, critics didn’t exactly think highly of the record. The Rolling Stone magazine’s Lester Bangs even referred to them as “just like Cream! But worse” and well, retrospective reviews called the album ‘definitive’ and ‘innovative.’

Widely hailed as the first folk rock record, this was a pivotal moment for Bob Dylan. He’s always been a fearless visionary and relatively unafraid to take risks, make mistakes and experiment. When he released “Bringing It All Back Home,” he stunned fans and critics by going electric.

With surreal lyricism and raw rock ‘n roll, he proved he could not be confined to one genre of music.

“By fusing the Chuck Berry beat of the Rolling Stones and the Beatles with the leftist, folk tradition of the folk revival, Dylan really had brought it back home, creating a new kind of rock & roll […] that made every type of artistic tradition available to rock.” – The Rolling Stone Record Guidecritic Dave Marsh

Boundaries didn’t exist for this guy and thanks to his ingenuity and sheer brilliance, he managed to change the face of folk rock music as we know it.

It pushed the boundaries of what a rock album should be. It was innovative and the first concept record and also featured one of the first hidden songs ever made. It was a huge breakthrough and people didn’t know what to make of it.

From “Lucy in the Sky with Diamonds” to “A Day in the Life” – the songs became instant classics.

“Music papers started to slag us off … because [Sgt. Pepper] took five months to record, and I remember the great glee seeing in one of the papers how the Beatles have dried up … and I was sitting rubbing my hands, saying “You just wait.”” – Paul McCartney

It was life-changing for a lot of people because while not everyone remembers every single detail in their lives, most fans can recall the exact moment they listened to “Sgt. Pepper’s Lonely Hearts Club Band” and how nothing was the same for them ever since.

To say that this is the most progressive pop album ever is a pretty bold claim. The Beach Boys were way ahead of their time with this one and it definitely broke new grounds in both rock and pop genres. But while it didn’t achieve instant commercial success after its release, its influence reached even the most legendary musicians like Bob Dylan and The Beatles (“Pet Sounds” inspired “Sgt. Pepper’s Lonely Hearts Club Band” and that alone says a lot).

“With its vivid orchestration, lyrical ambition, elegant pacing and thematic coherence, Pet Sounds invented – and in some sense perfected – the idea that an album could be more than the sum of its parts.” – The Rolling Stone magazine

It’s one of the best records of the ‘60s and it’s undeniably the finest work of The Beach Boys. And of course it has some of the most memorable songs too – it’s musical perfection.

This album is proof that just because it wasn’t an instant commercial success doesn’t necessarily mean it’s not good. On the contrary, some excellent records take time before critics and fans realize its greatness.

At the time of its release, the sales were poor (it took about a decade before the numbers reached six figures) and the drugs and sex themed songs shocked listeners to say the least.

“Much of what we take for granted in rock would not exist without this New York band or its seminal debut: the androgynous sexuality of glitter; punk’s raw noir; the blackened-riff howl of grunge and noise rock; goth’s imperious gloom.” – The Rolling Stone magazine

The record already had that raw distinctive sound of the band but what’s surprising is how diverse the musical styles are – pop, garage rock and even R&B. Thanks to this album, many musicians (including but not limited to punks and art rockers) found their inspiration.