10 Greatest Albums of The 1970s That You Probably Forgot About 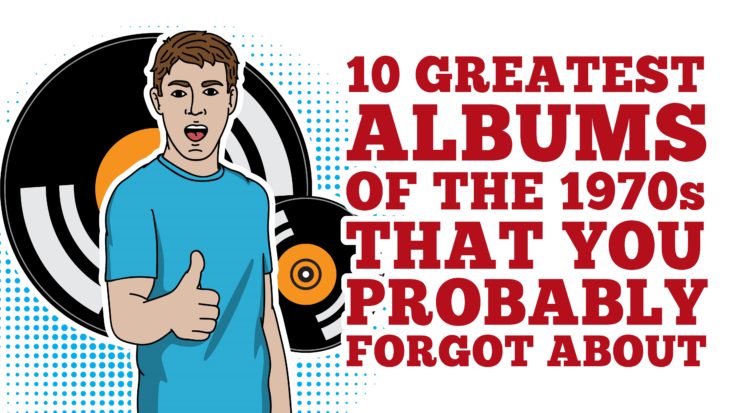 Okay, maybe you didn’t exactly forget but these records don’t always make it to lists of the greatest ’70s albums which we think is pretty unfair. You may have heard a song or two but if you’ve listened to all the tracks, then you’re a certified classic rock fan.

But if you’re only discovering some of these, then you’re welcome.

Four months prior to this album’s release, Bob Dylan’s offering “Self Portrait” was a huge disappointment to fans and critics. It was way below the typical Dylan standards. But of course he’d be back with a vengeance – “New Morning” wasn’t just critically acclaimed but it also quickly went gold.

It was familiar and traditional-sounding – the Bob Dylan people came to know and love. If “Self Portrait” made everyone question if Dylan still had it, “New Morning” was his answer.

“A newly re-discovered self-reliance is evident from the first measure to the last fadeout, the same kind of self-reliance that shocked the old-timers when this kid dared to say “Hey-hey Woody Guthrie, I wrote you a song.”” – The Rolling Stone’s Ed Ward

It opened with the sweet and sentimental love song “If Not For You” which was also covered by Olivia Newton-John. All in all, it’s a fine record with a rock ‘n roll edge – everything we like in a Bob Dylan album.

Recorded after Syd Barrett left the band he founded and named Pink Floyd, he embarked on a solo career and debuted with this album, “The Madcap Laughs.” It was almost two years in the making because by this time, Barrett was becoming more unpredictable and his erratic behavior became the cause for his departure from Pink Floyd. And it was getting increasingly difficult for others to work with him.

And the result was a record filled with psychedelia and a touch of folk rock.

“But for that misstep, however, The Madcap Laughs is a surprisingly effective record that holds up better than its “ooh, lookit the scary crazy person” reputation suggests.” – AllMusic’s Stewart Mason

Barrett can’t claim all the credits though because he had plenty of help especially from former bandmates Roger Waters and David Gilmour. There were several overdubs too. It may include some sub-par materials but overall, it’s still a tight album.

It’s the album that showcased Pink Floyd’s sheer brilliance and genius and “Atom Heart Mother” was their way of telling the world they’re done with their experimental stage and have now found their sound. It was the group’s first no. 1 record and while it didn’t top the charts in the US, it still became gold.

They’ve always been way ahead of their time and loved testing boundaries but before this, their music was barely memorable. Recently, however, both David Gilmour and Roger Waters expressed dislike towards “Atom Heart Mother.”

“So, there are interesting moments scattered throughout the record, and the work that initially seems so impenetrable winds up being Atom Heart Mother’s strongest moment.” – AllMusic’s Stephen Thomas Erlewine

Not everyone likes it though and even for those who have been following Pink Floyd, it’s still an acquired taste especially since some songs don’t leave enough impression on the listeners.

Released before The Beatles’ twelfth and final studio album “Let It Be,” Paul McCartney’s debut solo record signaled the end of The Fab Four. Estranged with his bandmates, McCartney played every instrument and only had then-wife Linda’s vocal contributions.

While it was commercially successful, it earned mixed reviews from both fans and critics because of the breakup.

“The record has a homespun charm, and a feel that suggests McCartney wasn’t putting too much pressure on himself to carry on the Beatles flame or make a statement… His love for Linda, expressed so ebulliently on “Maybe I’m Amazed”, was certainly genuine, but he wrote this eventual FM-radio staple as a classic, universal love song.” – Pitchfork’s Joe Tangari

It wasn’t his finest record but some songs hinted that this was only the beginning. McCartney wasn’t at the peak of his songwriting creativity but still, it was enough to make people long for more from him.

When they were making “In Rock”, did Deep Purple have the slightest idea it would soon become the record by which all other rock albums will be judged? It packed a lot of punch and then some. It was the band’s fourth studio album and in a way, it’s what solidified their spot in rock ‘n roll.

“The cacophony of sound (spearheaded by Ritchie Blackmore’s blistering guitar solo) introducing opener “Speed King” made it immediately obvious that the band was no longer fooling around, but the slightly less intense “Bloodsucker” did afford stunned listeners a chance to catch their breaths before the band launched into the album’s epic, ten-minute tour de force, “Child in Time.”” – AllMusic’s Eduardo Rivadavia

Deep Purple’s change of musical direction was both timely and satisfying. Their new sound was blistering, heavy and aggressive – something that surprised fans in a very good way. “In Rock” made legends out of the group.

It’s the final album that featured founding member and songwriter Lou Reed. He left The Velvet Underground before its release and he didn’t exactly like the final mix. Some think this is mediocre but we beg to disagree. The band aimed for a record ‘loaded with hits’ hence the title.

There was a little drama what with Reed claiming that it was edited without his consent. Bassist Doug insisted, however, that Reed himself did the editing.

“I gave them an album loaded with hits and it was loaded with hits to the point where the rest of the people showed their colours. So I left them to their album full of hits that I made.” – Lou Reed in a 1972 interview

The result was a jaunty kind of pop reminiscent of The Monkees style. And the record also featured two tracks which immediately became classics – “Sweet Jane” and “Rock & Roll.”

This was a huge moment for the Southern rock genre because The Allman Brothers Band was about to make history. This was no ordinary album and besides, it was the best way to introduce Dickey Betts who’s often regarded as the group’s savior mainly because he was able to successfully establish himself as a stellar songwriter.

“It was like a hunting cabin. The back of the house had a porch that was built out over a manmade lake that was maybe five or six acres. It was a cabin made out of old pinewood, and it had been there for a long time. … The Allman Brothers used it as a rehearsal facility — that and a place to go maybe to consume a little something that wasn’t quite legal. There were parties out there.” – Scott Boyer on the album’s title which was the band’s nickname for their cabin

Critics and fans may not be in total agreement to this record’s superiority over the debut album but one thing’s for sure, it’s a stellar one.

The only downside to releasing a great album is it sets the bar really high for the all the succeeding records. People now have expectations and the next one should either be on the same level or better. Such was the pressure on The Band.

“The level of the group’s collaboration declined and our creative process was severely disrupted. […] Who wanted to pour out their souls and not get credit? [Richard Manuel] stopped writing completely after awhile, and I don’t think [Garth Hudson] got much credit at all until some of the final records.” – Levon Helm

Sure, it may have lacked the punch that their first two albums had but still, without comparison to them, “Stage Fright” was and will always be a great record. It’s probably just a minor classic but still a classic all the same. People had high expectations and they were disappointed. But looking back, it’s really not THAT bad.

George Harrison wasn’t really given the chance to shine when he was still with The Beatles. His first solo work after The Fab Four’s breakup showcased his talent as a songwriter and his signature sound. He wasn’t just “the Quiet Beatle” anymore. He may have released two solo albums before but none of them were that memorable. This one, however, became an instant classic.

“Given his own studio, his own canvas, and his own space, George Harrison did what no other solo Beatle did on All Things Must Pass: He changed the terms of what an album could be.” – Pitchfork’s Jayson Greene

It’s rare to have a triple LP where almost every single track is superb. If at the time, some aren’t aware of his gift as a singer-songwriter, it was a wonderful surprise since the tunes were catchy and beautiful. Decades after its release, it continues to inspire its listeners.

This record is a masterpiece – that’s the most accurate way to describe it. It’s filled with sensual and romantic tunes that are difficult to shake off once you hear them. It had so much soul that any other musician will find it extremely difficult to imitate how Van Morrison did it – it’s not so much as techniques or style but more so because of his personality. The man knew how to add magic to his music.

“Moondance is an album of musical invention and lyrical confidence; the strong moods of “Into the Mystic” and the fine, epic brilliance of “Caravan” will carry it past many good records we’ll forget in the next few years. Van Morrison plays on.” – The Rolling Stone magazine

He incorporated various styles seamlessly and it worked. He achieved commercial success with this record and it simply solidified his spot as one of the greatest musicians of all time.