8 Most Hated Albums in Rock 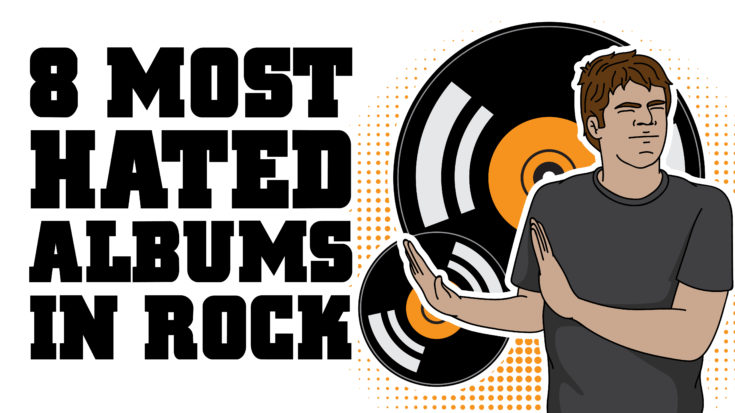 Rock music fans are a fickle-minded lot – they want something familiar but different. They want their favorite artists to take risks but condemn them if they do. They don’t want the same stuff over and over again but when bands depart from their comfort zone into uncharted territory, they will criticize.

To be fair, some of these albums aren’t that bad, they’re okay and they have good songs. Then again, nothing ever pleases people so even if it topped the charts, they will still hate on it just because.

If you just listen to this record without any bias or preconceived idea what it’s going to sound like, you’ll realize there are some good tracks. At the time of its release, it was cool to dislike it because well, most fans were kind of fed up with the changing frontman.

It had potential, let’s admit that. But part of the reason fans weren’t digging wasn’t just because of the new singer (it was the first one to feature former Extreme vocalist Gary Cherone) but overall, the band just wasn’t into it. It’s like they were bored but they had to put out another album.

The chemistry wasn’t there. Unfortunately for Van Halen, it was the first album that didn’t reach the million mark in sales.

A multi-awarded songwriter and poet who recently became the recipient of the Nobel Prize in Literature, you’d think Bob Dylan could do no wrong. But apparently, he makes some bad decisions sometimes too. Just like his double album “Self-Portrait” which was probably meant to confuse people – whether it’s the cover artwork or the tracks.

One of the most famous reactions was from author and critic Greil Marcus when he said “What is this sh*t?” when he first heard it. Most listeners were most likely thinking the same thing.

In his defense, Dylan said that “Self-Portrait” was a kind of joke.

“Well, it wouldn’t have held up as a single album—then it really would’ve been bad, you know. I mean, if you’re gonna put a lot of crap on it, you might as well load it up!” – Bob Dylan when asked why he opted for a double album

Love it or hate it, it still went gold in the US. Dylan got the last laugh.

KISS is no stranger to blunders or controversies or even hate. But with all their folly, nothing is as epic as this one. It was a huge stumble that for the first time in eight years, the band did not embark on a tour supporting the album.

KISS and orchestra shouldn’t even be mentioned in the same breath. They were at the top of their game and perhaps everyone would agree that coming up with this record was the mother of all bad ideas. The orchestral elements are enough to make even the most diehard fans run the other way but add in the concept and well, it’s absolute disaster.

“The Elder are a life-form without body. They are benevolent, but committed to the balance of opposites. And when darkness gets too strong, a hero is born to restore the balance.” – Gene Simmons on the concept’s metaphor

This deserves to be buried and never found ever again.

It’s supremely cheesy in a seriously bad way. You can just imagine the look on people’s faces when this came out – is this for real? What happened? What is this piece of crap they call “Love Beach?” Do we use this record when there’s no toilet paper in the bathroom?

You see, one of the big differences between regular folks and rockstars is the world doesn’t know when you pursued a bad idea and ended up with embarrassing results. And for Emerson Lake and Palmer, it was there for everyone to hear and maybe laugh at.

You know when people say don’t judge a book (or album) by its cover? Well that doesn’t apply here. What you see is what you get – a big ball of gooey cheese.

We can think of several words to best describe The Rolling Stones and ‘boring’ isn’t one of them which is why it baffles us why they even came up with “Dirty Work.” That’s not how we know them and definitely not how they make music.

Let’s give it to them though, “One Hit (To the Body)” was a great opener. But that’s all there is to it. If you’re listening to the album to look for anything that can resurrect it, stop wasting your time because you won’t find any.

“The album wasn’t that good, it was okay. It certainly wasn’t a great Rolling Stones album. The feeling inside the band was very bad too. The relationships were terrible. The health was diabolical. I wasn’t in particularly good shape. The rest of the band, they couldn’t walk across the Champs Elysées, much less go on the road. So we had this long bad experience of making that record, and the last thing I wanted to do was spend another year with the same people. I just wanted out.” – Mick Jagger

It was their lowest point as a band and the record was a real disappointment to fans. On the plus side, they’re still going strong!

There are some things that should never be and if we never knew the existence of this album, we’d still be more than happy. Gregg Allman and Cher were mismatched in so many ways which reflected on their short-lived marriage. But when it came to this musical collaboration, it was nothing short of catastrophic.

“Still, it’s hard to get over the head-shaking unlikeliness of this musical union, and when they tackle a song standard such as “You’ve Really Got a Hold On Me” or (God help us!) “Love Me,” you can tell how far below Allman’s usual standards they actually are.” – AllMusic’s William Ruhlmann

It didn’t even sell 550,000 copies. Allman’s Southern rock style would never, even in our wildest dreams, seamlessly blend with Cher’s glitzy pop. It just doesn’t work. In a 1982 interview, Allman answered all our WHY questions when he said, “Love is really blind, that’s for sure.”

A full frontal nude shot of John Lennon and Yoko Ono as the cover artwork – that alone was enough to tell you this was a huge departure from his work with The Beatles. It’s the result of their experimentation in Lennon’s home studio while his then-wife Cynthia was on a two-week vacation in Greece.

‘Unfinished Music’ is “saying whatever you want it to say. It is just us expressing ourselves like a child does, you know, however he feels like then. What we’re saying is make your own music. This is Unfinished Music.” – John Lennon

To anyone who hasn’t heard it, it’s hard to explain what it contains – there are sound effects, vocal improvisations, nursery rhyme covers, and novelty piano tunes. If we had to describe it in one word – it would be “confusing.” There’s just no better or more accurate description. At one point, it’s even difficult to imagine it’s Lennon’s work.

Some people hate on albums or artists for no particular reason other than just jumping on the bandwagon – it’s cool not to like them so you don’t want to be left behind. But this musical collaboration just ended the worst musical collaborations of all time. Metallica and Lou Reed should’ve stayed as far away from each other as possible to avoid giving birth to what can only constitute as a stumble of epic proportions.

In a nutshell, we have Metallica and their bored-sounding instrumentals as a backdrop for Lou Reed’s spoken word. It was puzzling, to say the least.

The lyrics alone are perplexing. To sum it up, it was nothing but a big, fat mess.