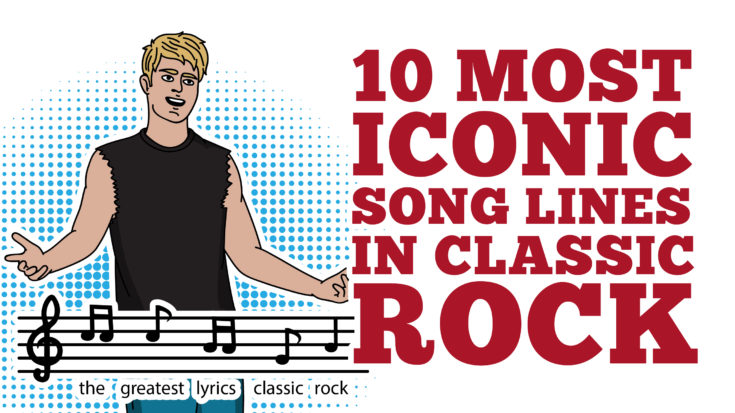 Do You Know Each One Of These?

If we can quote the entire songs here, we would. But these lines are perhaps as iconic as the tracks themselves. These are pretty much 10 more reasons to love classic rock.

P.S. If you have friends who can finish these for you, they’re keepers.

This is often the subject of various jokes and memes (“I don’t always kill men but when I do, I tell Mama.”) but we can’t deny how iconic this line is. It’s the start of something epic and magical. Are we the only ones who feel like singing this part is exhilarating because you know you’re about to belt out some high notes including the operatic voices? Anyway, Music scholar Sheila Whitele said that this section serves as an “affirmative of the nurturant and life-giving force of the feminine and the need for absolution.” Now that’s deep. According to the legendary frontman himself, “I’m going to shatter some illusions, it was just one of those pieces I wrote for the album: just writing my batch of songs. In its early stages I almost rejected it, but then it grew. We started deciding on a single about halfway through. There were a few contenders – we were thinking of “The Prophet’s Song” at one point – but then “Bohemian Rhapsody” seemed the one. There was a time when the others wanted to chop it around a bit, but I refused. If it was going to be released, it would be in its entirety. We knew it was very risky, but we had so much confidence in that song – I did anyway. I felt, underneath it all, that if it was successful it would earn a lot of respect. People were all going, You’re joking, they’ll never play it, you’ll only hear the first few bars and then they’ll fade it out. We had numerous rows. EMI were shocked – a six-minute single? You must be joking! The same in America – oh, you just got away with it in Britain.”

9. “Yesterday, all my troubles seemed so far away…”The Beatles (Yesterday)

The Beatles have given us so many songs to love we can basically fill this entire list with nothing but their classic hits. But we chose one that everyone probably knows about. So what makes it iconic aside from being a chart-topping track from the Fab Four? Well, it happens to be the most covered song in history. So, there’s that. It’s a beautiful ballad and rumor has it, Paul McCartney composed the melody in his dream. That’s not exactly far-fetched given that he has some pretty incredible songwriting skills and musicianship. According to him, “I remember mulling over the tune ‘Yesterday’, and suddenly getting these little one-word openings to the verse. I started to develop the idea … da-da da, yes-ter-day, sud-den-ly, fun-il-ly, mer-il-ly and Yes-ter-day, that’s good. All my troubles seemed so far away. It’s easy to rhyme those a’s: say, nay, today, away, play, stay, there’s a lot of rhymes and those fall in quite easily, so I gradually pieced it together from that journey. Sud-den-ly, and ‘b’ again, another easy rhyme: e, me, tree, flea, we, and I had the basis of it.”

We’ve always found their songs poetic and interesting. It’s like you need plenty of creativity and imagination to decipher the stories in every track. Most Grateful Dead fans would often say, “You get it or you don’t.” And really, that’s the absolute truth. Don’t you miss those days when songs were as deep and meaningful as this? No one does it like them. It’s epic and one of their finest works for sure. It could take you hours trying to break down the meaning behind it. Then again, we can always choose to just simply enjoy the music. And the line mentioned above is one that we’ll never forget. Do you still recall the first time you heard about this band? How their classic hits changed your life? Their concerts were insane. We still get jealous of all the lucky crowd who saw them perform live.

7.“Hello darkness my old friend / I’ve come to talk with you again…” –Simon and Garfunkel (The Sound of Silence)

This will touch every core of your being. The words, the vocals, the emotion – everything here is so raw and beautiful. Not many songs can boast of hitting you right in the feels and moving you like this. In a way, it’s haunting but still so dang soulful. In one interview, Paul Simon shared: “The main thing about playing the guitar was that I was able to sit by myself and play and dream. And I was always happy doing that. I used to go off in the bathroom, because the bathroom had tiles, so it was a slight echo chamber. I’d turn on the faucet so that water would run – I like that sound, it’s very soothing to me – and I’d play. In the dark. ‘Hello darkness, my old friend / I’ve come to talk with you again.’” Oh man, anyone else had goosebumps?

6.“Well, I’ve been afraid of changing / ‘Cause I’ve built my life around you / But time makes you bolder / Even children get older / And I’m getting older too…” –Fleetwood Mac(Landslide)

If that isn’t the most heartbreaking line we’ve ever read. If you’ve ever been through a rough break up, you’ll understand just how much gravity those words have. Stevie Nicks is more than just a pretty face with a golden voice. She had this knack of writing something so relatable to almost everyone. You see, this is one of the most beautiful songs ever written and she wrote it at a challenging time in her life. She said, “looking out at the Rocky Mountains pondering the avalanche of everything that had come crashing down on us … at that moment, my life truly felt like a landslide in many ways.” And that is how this timeless piece was born.

5.“Freedom’s just another word for nothing left to lose…” -Janis Joplin – (Me & Bobby McGee)

Janis Joplin was always someone we’d love to get to know more. She had an air of mystery about her that we absolutely loved. And the way she sings this song – it’s like you’re on a rollercoaster ride of emotions. It gets to you the way no other track can. Maybe it’s the rough emotion or the rawness and rasp in her voice. Whatever it is, it’s magical in more ways than one. Nobody will ever be as groovy as her. She’s on another level. Whenever she took the stage, she was like a beautiful firework that lit up the sky. Another line we love from this classic is, “I’d trade all of my tomorrows, for a single yesterday.” Man, it’s deep. It’s the kind of stuff that really makes you think. This is some really good music right here.

4. “In the days of my youth, I was told what it means to be a man / Now I’ve reached that age, I’ve tried to do all those things the best I can.” -Led Zeppelin (Good Times Bad Times)

Now that, my friends, is depth. More than face-melting guitar solos, mind-blowing riffs, heart-pounding bass lines and WTF drumming moments, Led Zeppelin has always treated their songs like works of art. It’s actually hard to pick one defining song for them because they’ve given us such an impressive catalogue of some of the best classic rock tracks of all time. Do we still have to say that this is one of those? It’s a beast of a song. Individually, they were strong, talented musicians. But as a group, they were unstoppable. For those wondering though, yes, it seems the drum kit was still intact after this insane performance. Even we were worried for a moment there.

3.“Please allow me to introduce myself / I’m a man of wealth and taste/ I’ve been around for a long, long year / Stole many a man’s soul and faith.” –Rolling Stones (Sympathy for the Devil)

There are songs whose opening lines are iconic and legendary enough, this is one of them. The dark lyrics and its awesome groove are the highlights to this classic hit from The Rolling Stone. According to Keith Richards, “Before, we were just innocent kids out for a good time, they’re saying, ‘They’re evil, they’re evil.’ Oh, I’m evil, really? So that makes you start thinking about evil… What is evil? Half of it, I don’t know how much people think of Mick as the devil or as just a good rock performer or what? There are black magicians who think we are acting as unknown agents of Lucifer and others who think we are Lucifer. Everybody’s Lucifer.” It’s a masterpiece, enough said. It’s both exceptional and sublime. It’s another track that’s best heard live.

We bet you didn’t just read that, you sang it. Don’t worry because we tend to do that all the time – in Steve Perry voice, no less. But hey, how else are you going to do it, right? The man sounds so good live – often, it’s way better than the studio version. So it’s really no surprise that it’s quite possible that everybody knows this song. Heck, even today’s kids know the words by heart. And the opening line alone is like an in-your-face jab – like a warning that you’re about to hear one of the greatest classic rock songs of all time. Few tracks actually have an effect like this. It’s sad that we can never go back to that era – Steve Perry’s glory days. He is an absolute rock god.

1. “Excuse me while I kiss the sky…”- Jimi Hendrix (Purple Haze)


In addition to being iconic, this is also one of the most misquoted lyrics of all time. You know, some people mindlessly sing “Excuse me while I kiss this guy…” Well, whatever you say buddy. Aside from the words, we especially love this song because for many people, it was their first taste of the psychedelic rock sound from Hendrix. And as expected, music was never the same way again. There were various interpretations of the track and others believed it talked about the whole psychedelic experience. However, Hendrix clarified that this was a love song. When he was asked how he came up with song ideas, Hendrix shared: “I dream a lot and I put my dreams down as songs. I wrote one called ‘First Look Around the Corner’ and another called ‘The Purple Haze,’ which was about a dream I had that I was walking under the sea.”