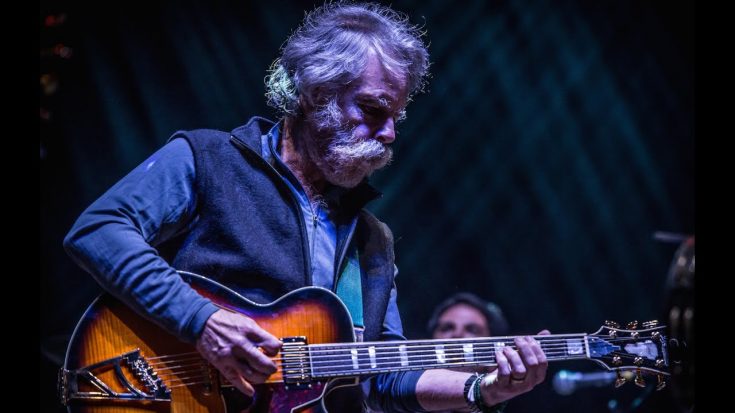 Grateful Dead’s “the other one” can be easily associated with Bob Weir. In fact, Weir became an important figure of balance inside the group’s jam songs, becoming the total opposite of fellow GD member, Jerry Garcia. If Garcia was the sun, Weir is the moon amongst the band, and equally just as important as those prominent members. It’s hard to just pick the greatest songs from the musician, yet, it’s not impossible. And so, we have here, the 10 greatest Grateful Dead songs from the one and only, Bob Weir.

Wake of the Flood became the first album to be released under GD’s own label, Grateful Dead Records. While Garcia and Robert Hunter wrote the majority of songs per usual, Weir’s epic contribution is this 3-part song piece called “Weather Report Suite,” which could easily captivate you with its simplicity.

“Playing in the Band” first appeared inside the band’s album of the same name, and got its polished revival inside Weir’s Ace. The song served as a concert favorite, with performances tallying up to 581 shows.

Another catch from Weir’s solo album, “Black-Throated Wind” serves as a staple among the band’s concerts from the time it was released until ’74. The chord progression of the song is simply amazing.

Albeit the song became a part of Weir’s solo album Ace, it was still a part of the Grateful Dead’s compilations, as it appears on Skeletons from the Closet: The Best of Grateful Dead compilation in 1974. The song is “a cowboy song” of Weir, concerning with its lyrics and a whole lot of country and western tunes.

You might recognize the tune somewhere since this song is a favorite road trip song ingrained in the annals of American culture. Not only that, but “Truckin’” also helped popularize the phrase “what a long strange trip it’s been.”

When Terrapin Station was released, the band was heading for more complex structures instead of the usually meek and jamming ones. Therein lies the power of “Estimated Prophet,” a song to debunk all the delusions of grandeur.

Although Ace is indeed Weir’s solo album, most of the songs were written with the help of his Grateful Dead mates. For this track, Hunter helped him reshape his love for old-school rock n’ roll, which is why “One More Saturday Night” could easily pass as a Chuck Berry song.

“That’s It for The Other One,” simply called “The Other One,” is the song that truly defines Weir’s role in the band. Being the youngest and the last one to catch up with any major changes from the band, it’s quite hard to follow through. Fortunately, luck is always in his favor, and he got his big shot with this song that gave him the right space from the band’s repertoire.

Speaking of what song he wanted to be played inside his funeral, Weir answered the opening lines of “Cassidy,” which revolves around the life and death cycle. With Weir’s voice that sounded as genuine as ever, it’s miraculous to hear.

Try to name a few well-known Grateful Dead songs and you probably would say “Sugar Magnolia” first. We’re not going to blame you though, since this song is an absolute gem. The song is second only to “Me and My Uncle” on GD’s frequently played songs list.