10 Fictional Bands That Rocked The World 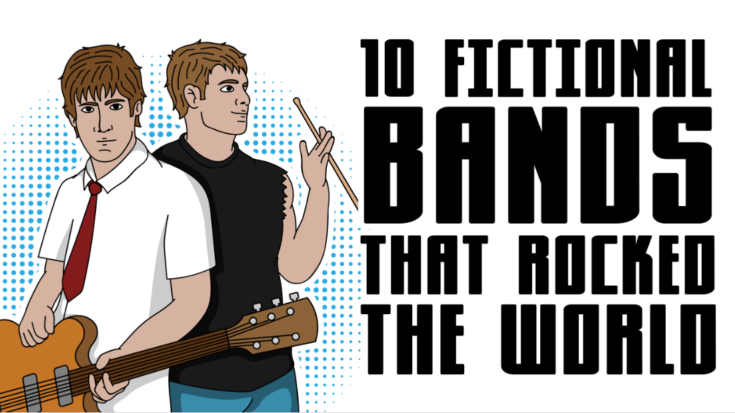 Better Than The Real Ones??

You just have to hand it to these movies – they know how to make their audience wish the fictional bands were real. In some cases, the cast were actual musicians with acting skills or it’s the other way around, famous actors with singing chops – if you want a more recent example, there’s Pitch Perfect which stars Anna Kendrick and Brittany Snow. It’s more than the Hollywood A-listers. What made it a hit were the mash-up of pop songs and of course, the catchy harmonies.

The same goes for the other ones on this list – not every single one of them may have come up with original songs but the fake bands were good and convincing enough to make us want them to exist in real life.

Let’s revisit the greatest fictional groups to ever grace the big screen.

They’re perhaps one of the most popular fictional bands of all time. Although to be fair, they might as well have been called Marty McFly and The Starlighters. Marty plays the guitar and likes listening to Van Halen and Tom Petty & The Heartbreakers.

So while helping Marty, Marvin cut his hand which made him unable to perform with his band. Marty happily stepped in and played “Earth Angel.” When Marvin asked him for another number, Marty went for “Johnny B. Goode” and this is when Marvin called Chuck.

“Chuck, Chuck! It’s Marvin! Your cousin, Marvin Berry! You know that new sound you were looking for? Well listen to THIS!” – Marvin Berry on the phone with Chuck

So basically, the movie’s telling us that while Chuck Berry took the credit, it was Marty McFly who actually pioneered rock ‘n roll. Well, whatever, but their rendition of “Earth Angel” just rocks.

This lighthearted film is basically a spoof of both musical and spy movies. It stars Nick Rivers the rockstar who is played by Val Kilmer. He’s about to perform at a festival held in East Germany when he suddenly finds himself becoming involved with the French resistance movement after encountering a woman named Hillary Flammond.

So anyway, his “Skeet Surfin” obviously ‘borrowed’ the opening riff from “Johnny B. Goode” and the whole song is in fact a huge parody of The Beach Boys’ classic hit.

“We made repeated attempts to combine a rock and roll movie with a World War II movie but it was very difficult to do… We already had ideas for scenes we wanted to do and we tried to fit in plot around those scenes.” – Director David Zucker

There are several nods to rock ‘n roll including Nick Rivers singing “Are You Lonesome Tonight?” which was popularized by Elvis Presley and Little Richards’ “Tutti Frutti.” The film has plenty of good tracks and we’d actually watch Nick Rivers if he really went on tour.

What separates this film from the others is the fact that the director hired not just real musicians, but actual rockstars – Zakk Wylde, Jason Bonham, and Jeff Pilson sort of made this a legit rock ‘n roll movie.

So the story goes – there’s this heavy metal legend called Steel Dragon. Chris Cole, played by Mark Wahlberg, works as a technician by day but also moonlights as the lead singer of Steel Dragon tribute band Blood Pollution. Steel Dragon’s frontman Bobby Beers was fired and Cole receives an invite from the group to audition. He signs up and is then called “Izzy.”

One concert scene was actually filmed in front of 10,000 Metallica and Megadeth fans. As far as music goes, it was good. Steelheart’s Miljenko Matijevic provided the vocals for Wahlberg. Even Myles Kennedy had a cameo!

Who would have thought this thriller film would feature one of the most memorable fake bands we’ve ever seen? It stars the late Anton Yelchin and it follows the tale of a punk band who witnessed a murder at a club and found themselves being held hostage in a green room.

This is pretty much what happens when you ‘train’ the actors in a punk-rock boot camp – everything feels so real. The band performs “Nazi Punks Fuck Off” by The Dead Kennedys.

“for anyone who enjoys sitting through 90 tense minutes and feeling the attendant adrenaline rush. It’s like a well-constructed horror movie…” – Film critic James Berardinelli

The performance is actually impressive, to be honest. We love the raw energy and how they went all-out – everything you want to see in gigs. Also, keep in mind they were playing in front of hostile, neo-Nazi skinheads. They may not be real but we sorely wish they were.

We are not gonna lie – we came here for John Cusack and stayed for Jack Black. The man has some serious pipes there! It’s a classic film and anyone who loves rock ‘n roll most probably has seen this already. If you haven’t yet, you’re welcome.

When they were introduced as “Sonic Death Monkey,” no one knew what to make of it. And as Jack Black tells the audience before he performs:

“We’re no longer called Sonic Death Monkey. We’re on the verge of becoming Kathleen Turner Overdrive, but just for tonight, we are Barry Jive and His Uptown Five!”

Too bad though, we preferred the first one actually. We thought Barry (Jack Black’s character) would start going crazy on stage. Instead, he sings a soulful rendition of Marvin Gaye’s “Let’s Get It On.” If that surprised the heck out of you, don’t worry because you’re not the only one.

5. Hedwig and the Angry Inch

We fell in love with the rock opera feel with this one. Based on the book by John Cameron Mitchell, this musical follows the transgender Hedwig Robinson – the lead vocalist of the fictional band.

The music is inspired by the androgynous style of David Bowie – his glam rock, never-without-glitter era. It also touches on works by Iggy Pop, Lou Reed and John Lennon.

“She’s more than a woman or a man. She’s a gender of one and that is accidentally so beautiful.” – John Cameron Mitchell

It opened on Broadway and several Hollywood A-listers have taken on the role of Hedwig – Neil Patrick Harris, Darren Criss, Lena Hall, Michael Cerveris, Michael C. Hall and Anthony Rapp among others.

The movie remains unforgettable though and whether it’s hard rock or ballad, Hedwig slayed every song – in a very spectacular fashion, of course. If the group actually existed, we’ve no doubt they’d have massive following.

Sometimes you have to wonder, what if Jack Black formed a REAL rock ‘n roll band and not just a fake one made for a film? We’ve seen his live performances and he surely can perform with the best of them. He’s hilarious, that’s a given, but how many can actually rock like him? Take this movie, for example. The man’s clearly in his element. It all just comes naturally for him.

Black plays the part of Dewey Finn who was booted out of his band and he ended up disguising as a substitute teacher. He proceeds to form a group with his talented fourth-grade students so they can join Battle of the Bands and well, he could take the money and pay off his rent.

Until 2015, it was the highest-grossing musical comedy of all time. Watching it is a great treat for all classic rock fans since the soundtrack features songs from The Clash, Led Zeppelin, ACDC and Deep Purple to name a few.

While we are still confused why Michael Cera is often the punch line of so many jokes (some of which are insanely hilarious by the way), we can’t leave out his band in this film. Sure, it was a very entertaining movie but our ultimate favorite part is his fictional band, The Sex Bob-omb. Yeah, you should see yourself try to pronounce it.

Let’s be honest, they look like those kids who would never make it past their mom’s garage. But hey, once they start playing, you better hang on to your seat. These kids know how to rock. Oh and it’s only Beck who wrote and composed their songs, no big deal.

If you’re not a real music snob, you can appreciate how cool they are. And the fake band adds so much to the movie, just check out the clip to know what we’re talking about.

You might wonder how we came up with this list. Well, the rule of thumb is that if we would see them and buy their records if they actually existed, then they should be here. That’s fair enough, right? And so, who can forget the fictional rock act Stillwater from the classic film “Almost Famous?”

To make everything realistic, the actors had for to rehearse for 4 hours every night, 5 nights/ week for six weeks! Talk about dedication!

“Not since A Hard Day’s Night has a movie caught the thrumming exuberance of going where the music takes you.” – Rolling Stone magazine’s Peter Travers

There are so many things to love about this group – they were the product of writer and director Cameron Crowe’s encounter with rock legends Led Zeppelin, Lynyrd Skynyrd, The Allman Brothers Band and Eagles. Oh and Heart’s Nancy Wilson co-wrote some of the songs – it can’t get any better than that!

Spinal Tap is the fictional rock band to end all fictional rock bands. Thanks to this film, everyone else had to step up their game. You know what’s great about them? They’re so good it’s hard to believe they were nothing but a product of the writer’s imagination.

The humor is spot on and sometimes, we have to remind ourselves they’re not a real group. How many actually made the mistake of thinking they’re far from being fake?

Besides, it became a consensus among rockstars that the depiction is pretty accurate. And well, when Dave Grohl says it’s the “only rock movie worth watching,” you better believe him.