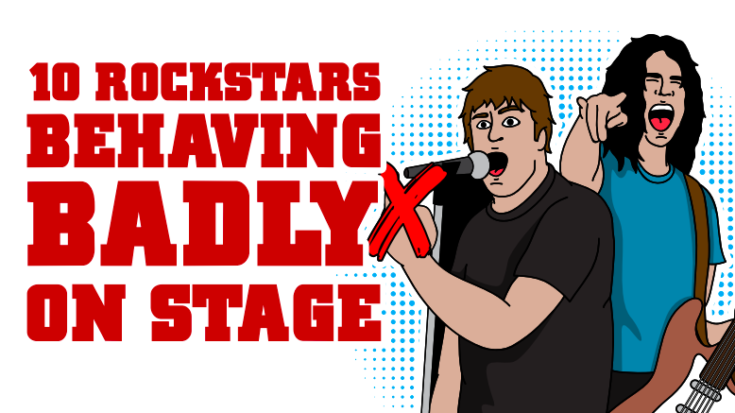 Rockstars aren’t really known for proper etiquette and manners, especially onstage. In fact, they’re known to do the exact opposite of being properly behaved in front of thousands of people in the audience. Quite a number actually has been known to go off the rails during live shows. Whether it’s physical wrestling, animal cruelty, or blowing up stuff, unsuspecting audience are always in for a wild surprise when their favorite rockstars take the stage. The gnarliest of the gnarly antics can happen anytime with the alcohol-fuelled, drug-laced performances that these rockstars have graced us with throughout the decades.

Aside from making some of the greatest hits in alternative rock, Oasis has been also known for the endless feud between band members brothers Liam and Noel Gallagher. Sibling rivalry is a natural thing, especially when you’re in a band, tensions and cat fights are bound to happen. The Gallagher brothers however, have taken sibling rivalry to another level, even making them recognizably controversial figures in the music industry. The longstanding beef between the brothers is entertaining for sure. The brothers also don’t shy away from giving each other a hard time mid-performance even while on stage. In this performance of “Whatever”, the brothers stopped mid-song because of a disagreement about the arrangement of the song. As Liam started singing, Noel shook his head at Liam on the other side of the stage letting him know he wasn’t pleased with his brother’s take on their performance. This angered Liam and proceeded to tell his brother to sing the song himself. Noel even described his brother as “rude, arrogant, intimidating and lazy. He’s the angriest man you’ll ever meet. He’s like a man with a fork in a world of soup.” This feud ultimately led to the demise of Oasis.

The Who was known for their explosive concerts – literally. Moon was one to start wild behavior when he displayed his erratic personality on stage upon smashing and breaking instruments during and after performances, thus getting him the moniker “Moon the Loon”. Of course, the crowd always loved it, which helped enable his affinity to just break things. Moon was also known to detonate and blast hotel room toilets and even setting furniture on fire.

In one infamous performance in Daly City, San Francisco in 1973, Moon had passed out cold on his drums while playing “Won’t Get Fooled Again” and had to be carried off stage. The rest of the band didn’t seem phased by Moon’s drunken wasted state and guitarist Pete Townshend just came to the mic and asked the audience,

“Can anyone play the drums? I mean somebody good.”

Scot Halpin, an audience member, stepped up and finished the rest of the concert for Moon

If you want to rile up Courtney Love, just bring a framed picture of his late husband Nirvana frontman Kurt Cobain at her own gig. Love basically went off the rails in the public eye, and dealing with the conspiracy that she was the one who killed the beloved grunge rock icon since Cobain’s untimely suicide didn’t really help her case. One of her greatest meltdowns actually happened on stage while she was on a tour with her band Hole in Brazil. At the show, one fan was holding up a picture of Kurt Cobain in the audience, an act that triggered a tirade from Love. She spots the fan and calls her a “fat goth”, and stopped the show midway through the set, declaring the show was over, to which the crowd reacted violently.

She goes on to rant,  “I’m not Kurt. I have to live with his sh-t, his ghost, his kid every day. Throwing that up is stupid and rude and I’ll beat the f-ck out of you if you do it again”, then proceeds to walk out the stage.

Green Day front man Billie Joe Armstrong has had many meltdowns in his long career. It seems like he has a short fuse. Punk is his work and as evidenced by his on-stage tantrum at at the 2012 iHeart Radio festival, punk is also his attitude and behavior. Billie Joe stopped singing mid-set when he saw on the monitors that Green Day only had one minute left to play. This led to Armstrong using up his last minute to go on a profane tirade about the time limit, bragging about how he’s been “around since 1988” and that he is not Justin Bieber. He then smashed his guitar and stormed off the stage. The lead singer checked into rehab the same week.

It’s also not the first time Armstrong had an on-stage anger-fueled rant. In 2006, Armstrong ended his band’s performance by shouting into the audience:

“Hey, why don’t you come here you little mohawked motherf—ker? You wanna fight? I’ll fight you right now. C’mon, get up here on the stage.”

The original Alice Cooper group basically invented “shock rock”. But it was the infamous “chicken incident” that started this whole phenomenon. While Alice Cooper was onstage during their set at the Toronto Rock n Roll festival in 1969, a live chicken meandered onstage. Legend has it that it was a fan who threw the chicken on stage. Now Alice, because of his lack of experience with farm animals, thought the chicken would fly away, so he reciprocated by grabbing the chicken and throwing it back into the audience. Obviously, the chicken did not fly, instead, it fell into the crowd and the viciously voracious fans dismembered said chicken, tearing the poor animal to pieces. The next day, the headlines over exaggerated the incident, saying “Alice Cooper bites head off chicken and drinks blood”. Thus, “shock rock” was born.

The band didn’t defend themselves, instead, they decided to capitalize on the sensationalism of the whole event. Later on, Alice Cooper admitted that the “chicken incident” was all an accident.

Ozzy has been known to be a crazy personality on and off stage. He certainly was on the bad side of animal advocates when he did one of his most infamously shocking stage antics during a show in Des Montes, Iowa that happened on January 20, 1982 – biting off a live bat’s head with his own mouth. During his concert, a fan threw an unconscious bat (from which the fan had hidden in a baggie and gotten inside the concert) onstage. Ozzy, thinking it was a rubber bat, picked it up and bit its head off as a stunt. Not long after, he found out that the bat was alive and that he’d killed it with his own mouth. He could see his wife Sharon backstage screaming in horror and disgust “Dummy! It’s real!”. He later admitted that what he did was “very wrong” and that he didn’t realize it was really alive at that time, and had to go to the hospital to have a rabies shot afterwards because the bat also ended up biting him as well, before it met its death inside Ozzy’s mouth.

Of course, this list really wouldn’t be complete without a Marilyn Manson shocker. The famed Satanist always has something sinister brewing up his sleeve. And people already expect for him to take things always a little bit too far. Some of the creepiest things he’s done on stage include taking a Nazi flag then ironing it and even cutting himself. One of the weirdest things he’s done though is “jacking off with a strap-on dildo and urinating on the crowd”, as reported by the police officers who arrested him for sexual misconduct following this incident. Manson violated Florida’s Adult Entertainment Code, even having reports of the rocker being nude when he sprinkled on the crowd. Manson has also had a number of lawsuits regarding this kind of behavior. He’s once had to pay a fine of $4,000 for allegedly approaching a security guard, wrapping his legs around him, and gyrating his genitals on him. Manson described it as, “having sex with a man’s head.”

Do we expect anything less from the Red Hot Chili Peppers? They’re known to always let it all hang out, except for one sock to strategically cover what needs to be covered. At the 1999 Woodstock Festival, popular bassist Flea even went full on nude, leaving nothing to the imagination. Drummer Chad Smith said of their wild naked stage antics,

“It’s fun, you should try it sometime… It’s not much of a conversation, it’s a very spontaneous thing. In Europe, especially 20 years ago, they were very open. It’s okay, do whatever you want, nobody is going to really care too much about having your dick out or whatever. People are more uptight in America about that sort of thing. So in Europe, Flea would more frequently rock naked.”

The police eventually got to the band’s stunt and arrested Flea for obscenity.

The number one rockstar who is notorious for bad stage behavior has got to be Guns N’ Roses’ very own Axl Rose. His reputation has been built around his knack to spark controversy, especially on stage, or off-stage perhaps, when he once literally jumped off stage to attack a fan. It was a show in St. Louis and a fan in the mosh pit was taking pictures during the concert when it was already announced that cameras weren’t allowed. Rose was somehow very infuriated by the fan who was breaking the rules (maybe he was taking notes from Axl himself), and proceeded to tackle the fan as he leaped off stage into the crowd to take matters in his own hands.

The tantrum eventually incited a riot now known as The Riverport Riot or the “Rocket Queen Riot” leading to fans destroying Guns N’ Roses’ equipment. Dozens were injured and Rose was arrested and charged with having incited the riot.