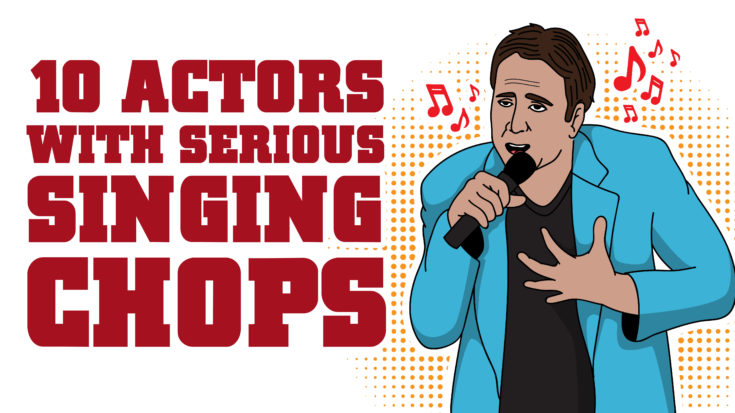 We all know Johnny Depp can sing. I mean, unless you’ve been living under a rock, you’d know he’s part of the supergroup Hollywood Vampires and he performs in shows alongside Alice Cooper and Joe Perry who happen to be rock legends.

Jared Leto is also not included in this list because well, his band 30 Seconds To Mars is kinda huge so basically most people knew he was a musician before he played Joker in Suicide Squad.

But did you know, your favorite actor COULD have some hidden (or maybe not-so-hidden) talent and may actually be talented in the vocal department. Hint: If you’re a huge MARVEL geek, I swear you’d love this list!

He’s been in numerous blockbusters like Mission Impossible: Ghost Protocol, 28 Weeks Later, The Hurt Locker and S.W.A.T. But nowadays, he’s mostly known as the master archer Clint Barton a.k.a. Hawkeye in the Avengers movie franchise. He’s not really always in the spotlight and he even made a joke about it in one late night show – he reminded people that he had super powers too.

And I totally agree. I mean, what else would you call his golden pipes? The dude can sing for real!

“I’m quite conscious of people being like, ‘Really, this is happening now?’ But I’m also stoked about the idea of performing live.” – Jeremy Renner

Even with so many upcoming projects (I can hardly wait for Avengers: Infinity War), music remains a big part of his life and he says it has always been his passion. Come on, just check out the clip and you’ll see he killed it!

As if I couldn’t love Robert Downey, Jr. more! I have an honest question, what can this guy not do? He’s a great actor, funny as hell, always looks cool and let’s face it, he gets better with age. And now, this – apparently, he knows how to carry a tune too! Okay, maybe that was a bit of an understatement. And if you don’t know what the heck I’m talking about, just watch his duet with Sting.

“As it turned out the album’s arranger, Jack Nitzsche, knew my dad, and Let It Bleed would be on repeat alongside Jefferson Airplane, Janis Joplin, Art Pepper, Charlie Mingus and Artie Shaw. All of them influenced me hugely, but I’m six. So what else am I into?” – Robert Downey Jr.

So you see, classic rock has played an important part of his life. Besides, he has released his debut album back in 2004 and that basically tells you he’s taking music seriously.

If Zachary Levi sang to me like that, I would have fainted dead away. And also, if you haven’t noticed, this is the third actor from the Marvel Cinematic Universe. Yes, I know he’s more popularly known for the TV series Chuck but, aside from being the voice of Flynn Rider in “Tangled,” he also played the part of Fandral in Thor: The Dark World. I’m betting you’ll watch that again, LOL.

“Growing up, my love for theater was insatiable. I just love to make people laugh and clap and smile. When I discovered drama and the ability to move people to tears, it was so powerful. As much as you can feel like God created you to do something, I believe He made me to entertain.” – Zachary Levi

We know life is unfair and if you need proof, just take a look at Zachary Levi – he’s the total package, for sure.

You can tell this guy really loves to sing. Have you seen his cover of The Beatles’ “Twist and Shout”? His passion for music is something! And well, the fact that he’s absolutely swoon-worthy, that’s a huge plus right? One thing’s for sure, he knows how to charm anyone with his singing skills!

Whether it’s “Thriller” by Michael Jackson or “Bad Romance” by Lady Gaga, his versatility as a musician is astounding. I would definitely go and see him perform live. And his collaboration with 500 Days of Summer co-star Zooey Deschanel is a must-watch too!

He made you cry in “Logan” and now watch him as he charms your pants off. To be fair, I knew he had serious singing chops way back – even before Les Miserables. He’s one of the first people to come to mind when I think of multi-talented actors.

“Music and the emotional life–it completely links and that is what it does for me. I am probably someone who at a fault may live a little bit in my head and music just goes straight to my heart. So I listen to music all the time and I think everyone does, depending on what kind of mood you want to create. That’s what music does for me. All kinds, I listen to all kinds music all the time.” – Hugh Jackman

He once sang “Happy Birthday” to Amanda Seyfried and I have no idea how anyone can turn that song into something that sounds ultra sexy.

I still think Jack Black doesn’t get the recognition he deserves especially with the massive amount of talent he has both in acting and singing. He’s funny as hell and he can sing basically any kind of song. The dude’s a real best when it comes to music. His performance with Tenacious D is always fun and entertaining to watch.

“You got to rehearse your jams, but once they’re in your bloodstream, it’s one of the best, easiest jobs there is. And the charge that you get in front of a crowd — it’s sexual.” – Jack Black

I’ve seen a lot of his covers and other performances and it was always light-hearted and comical. But when I saw his take on “When Doves Cry,” it was like seeing another side of him as a musician and performer. Still, his SNL sketch is ridiculously good. How can anyone actually not like it?

Maybe I’m a little bias because he is my favorite character in “Stranger Things.” I mean, who doesn’t find Dustin adorable? But to be fair to all the cute cast, they are extremely talented. Finn Wolfhard , Caleb McLaughlin, and Millie Bobby Brown all have golden voices. I must say, there’s so much potential here!

But for Gaten Matarazzo, at a young age, he’s already a Les Miserables veteran you guys.

Okay, he sounds like a real grownup already. Now, I just can’t wait for the second season of “Stranger Things”!

In the Famous Chris-es (Evans, Pine, Hemsworth and Pratt) of Hollywood, Chris Pine just improved his ranking after Wonder Woman broke box office records. So far, he’s been having the best year! And as if he doesn’t make everyone swoon each time he talks, here he proves he’s more than just a pretty face. He has golden pipes too!

“I’d love to. I’m sure we would get excoriated and eviscerated by that lovely thing we call the Internet [laughs]. F*ck them anyway. Actually, just to spite them, I will.” – Chris Pine on the possibility of a career in music

Well, he probably won’t land the role of a Prince Charming in the musical film “Into The Woods” if he didn’t have THAT voice. And you know what else, he likes to sing in the shower just like us but way better, obviously. And he once serenaded a fan – BRB as I get officially jealous.

Am I the only one who thinks Ewan McGregor needs to record this alone? I would love to have his cover on my playlist. He sounds so good! And if I may say so, he managed to steal the spotlight from Robbie Williams which in itself, is already quite a feat!

“I had never sung like I was expected to sing for ‘Moulin Rouge,’ where the singing was a part of the storytelling and not just part of the character. I’ve only ever sung as a character, if you like, before, where if my singing wasn’t very good, it didn’t matter. It had to be on a certain level. … We certainly did a lot of singing training.” – Ewan McGregor

Maybe that training really helped him a lot. Even without the singing skills, though, he’s still one of the most talented and humble actors in Hollywood. And he seems like an all-around cool guy too!

See? What did I tell you earlier about Marvel fans loving this list? This is the fifth guy who starred in any of the films in the Marvel Cinematic Universe. So here, if Heimdall isn’t busy guarding Asgard’s Rainbow Bridge and defending the gates against intruders which is sort of his day job, he likes to make really good music on the sidelines.

But is it that surprising though? I mean just listen to Idris Elba speak and your ovaries will start giving your warning signals that they’re about to explode.

“There’s a huge stigma attached to actors or musicians crossing over from one side to the other. No one likes to see it. ‘Stay where you are!’

“I did worry that it might water down how people see what I do as an actor. Because my music is so much more truthful about my art – me – than my acting is. Music comes from my soul. I can connect with you more through my music.” – Idris Elba

A talented actor and musician – what more can you ask for?