10 Songs That Don’t Mean What You Think They Mean 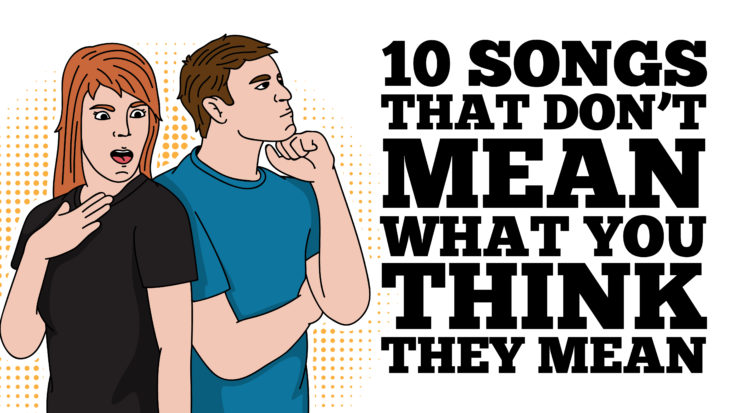 We don’t know if the real meaning behind these songs were intentionally hidden or not. But the thing is, it makes everything more intriguing especially when the lyrics don’t make a lot of sense at first glance. Sometimes, when we hear the words, we think we know exactly what is going on in the songwriter’s mind. But you’d be surprised to know that there are common misconceptions about what they mean and we’re here to correct that.

Warning, though. You might not look (or listen!) at these tracks the same way again.

Okay, everyone’s first impression is probably that this is a love song. I mean, the verse “My life is yours, and you can have my world” is supposed to be romantic. It’s probably about a proposal or declaration of the guy’s feelings. That’s it, right?

Wrong. You’d listen to this differently when you know this was written by Charles Manson. Yes, THAT guy!
It was originally called “Cease To Exist” which Manson showed to Dennis Wilson when they were still friends. Apparently, Manson was furious with the lyrical changes.

“One day, Charles Manson brought a bullet out and showed it to Dennis, who asked, ‘What’s this?’ And Manson replied, ‘It’s a bullet. Every time you look at it, I want you to think how nice it is your kids are still safe’.” – Beach Boys collaborator Van Dyke Parks on the incident after Manson found out he didn’t have any credit

Did I just spoil it for you? Well, sorry, someone had to do it.

A song definitive of the ‘90s, it all starts with something romantic – “Could you whisper in my ear / The things you wanna feel / I’d give you anything / To feel it coming…” So, of course, just like The Beach Boys track, you’d think this was another cheesy love song because duh, the ‘90s was full of it.

Then comes the line “Don’t you love the life you killed?” and you’re probably like, “Okay I didn’t see that one coming.” The real story is less innocent than the title.

“The song is actually about these two teenage kids, and the girlfriend gets pregnant, and they’re trying to decide whether she should get an abortion, or they should get married or what should go on…” – Johnny Rzeznik

To be fair, there are some telltale lyrics toward the end of the song. Still, no one saw it coming and nobody definitely expected that was how it turned out.

8. The Beatles – “Lucy In The Sky With Diamonds”

Most people believe this was low-key about LSD or drugs which is totally understandable because at the time, the songwriter John Lennon was known to drop acid and you can it’s easy to see that LSD is somehow prominent in the title alone.

But the real back story is actually simple and VERY literal too.

“My son came home with a drawing of a strange-looking woman flying around. He said, ‘It’s Lucy in the sky with diamonds.’ I thought, ‘That’s beautiful.’ I immediately wrote the song about it. After the album had come out and the album had been published, someone noticed that the letters spelt out LSD and I had no idea about it. … But nobody believes me.” – John Lennon in an interview during the Dick Cavett Show

The girl is named Lucy O’Donnell and everything from here on out is pretty much self-explanatory. Lennon also told the Rolling Stone magazine that he had no idea the title would spell LSD. And he practically begged all the listeners to quit associating it with acid.

It’s a criminally underrated song, for sure. Anyway, unless you’re a hardcore Led Zeppelin, you probably thought this was about a girl. Especially since the lines “Should I fall out of love, my fire in the light / To chase a feather in the wind” seem to talk of romance. But it’s not.

This is actually Robert Plant’s tribute to his son Karac who died at five years old in 1977 while the band was on tour. A friend even said that Jimmy Page “hated ‘All My Love,’ but because it was about Karac, he couldn’t criticize it.”

“We [drummer John Bonham and I] both felt In Through the Out Door was a little soft. I wasn’t really keen on “All My Love.” I was a little worried about the chorus. I could just imagine people doing the wave and all of that. And I thought, ‘That’s not us.’ In its place it was fine, but I wouldn’t have wanted to pursue that direction in the future.” – Jimmy Page

Perhaps the telltale lyric is in the last part when Plant sings, “He is a feather in the wind…”

Everyone knows this dark masterpiece from The Eagles. And maybe the only thing more popular than this song is the rumor about its actual meaning. Some say “Hotel California” worships the devil while others believe it was a sort of allegory for self-destruction, greed and even hedonism which were prominent in the music industry back in the 1970s.

In an interview with Rolling Stone, Don Henley sets the record straight:

“more of a symbolic piece about America in general… Lyrically, the song deals with traditional or classical themes of conflict: darkness and light, good and evil, youth and age, the spiritual versus the secular. I guess you could say it’s a song about loss of innocence.”

The words may speak of a tale about a traveler checking into a hotel but it’s way more than that. Nonetheless, it still goes without saying that “Hotel California” is undeniably one of the finest music ever written.

It’s pure magic and the only thing I don’t like about it is it’s way too short for something this beautiful. But that’s not really surprising given that it’s one of the greatest songs of all time as listed by the Rolling Stone magazine.

I’m going to bet most listeners don’t know the real meaning behind this track. You see, it’s not a common theme and in all honesty, you can read the lyrics for the nth time and you might not still guess it right.

According to frontman Robert Smith, “The song is about hyperventilating—kissing and fainting to the floor.”

So there you have it, ladies and gentlemen. Who would have thought? Although even if it’s about having difficulty in breathing, somehow, it still connects to something pretty romantic. So maybe yes, it’s a love song in a way.

Also, it was inspired by a trip with his then-girlfriend.

It’s like it became dark all of a sudden.

“It’s probably better that they think it’s a love song at this point. That song just came up from somewhere and I recognized it as being really violent and awful. But it wasn’t directed at any one person. I would never write a song like that. Even if there was one person in the world thinking, This song is about me, I could never sing it or put it out… I didn’t want to record that, I thought it was too much. Too brutal. I think there’s enough of that ugliness around.” – Michael Stipe

There’s too much misinterpretation but Stipe’s right. Let’s not burst another person’s bubble.

Although “American Girl” was never a massive hit, it was definitely one of the group’s most popular tracks. Maybe it was due in part to the dark and disturbing rumor surrounding it. It had something to do with the verse, “Well it was kind of cold that night / She stood alone on her balcony / Yeah, she could hear the cars roll by / Out on 441 like waves crashin’ on the beach.”

The thing is, there was a college student who committed suicide by jumping from her balcony. The residence hall was located alongside U.S. Route 441.

“Urban legend. It’s become a huge urban myth down in Florida. That’s just not at all true. The song has nothing to do with that. But that story really gets around… They’ve really got the whole story. I’ve even seen magazine articles about that story. ‘Is it true or isn’t it true?’ They could have just called me and found out it wasn’t true.” – Tom Petty

Well, now we can all sigh with relief.

Story has it that the song is about Phil Collins’ personal experience. According to rumors, he saw someone drowning but was too far away to help. He saw a guy who could’ve helped the drowning person but didn’t. Collins saw this guy at a concert and sang to him.

Okay, for the record, none of these stories is true.

“I don’t know what this song is about. When I was writing this I was going through a divorce. And the only thing I can say about it is that it’s obviously in anger. It’s the angry side, or the bitter side of a separation. So what makes it even more comical is when I hear these stories which started many years ago, particularly in America, of someone come up to me and say, “Did you really see someone drowning?” I said, “No, wrong”. And then every time I go back to America the story gets Chinese whispers, it gets more and more elaborate. It’s so frustrating, ’cause this is one song out of all the songs probably that I’ve ever written that I really don’t know what it’s about, you know?” – Phil Collins

So yes, it’s about the grief he was going through after his divorce.

If you ask people what this Bruce Springsteen classic is all about you, I guarantee most of them would say it’s about American patriotism because duh, it’s all in the title. Sadly, though, that’s a misinterpretation. It’s actually about the Vietnam War – the harmful effects and also the hostility that veterans often experience.

“I don’t know if anybody could imagine what their particular experience is like. I don’t think I could, you know? I think you had to live through it. But when you think about all the young men and women that died in Vietnam, and how many died since they’ve been back – surviving the war and coming back and not surviving – you have to think that, at the time, the country took advantage of their selflessness. There was a moment when they were just really generous with their lives.” – Bruce Springsteen

Still, it remains one of his most popular and well-loved songs.