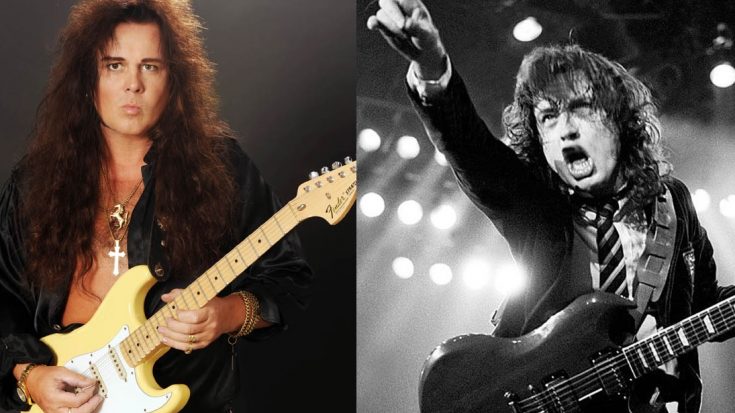 The extravagance of heavy metal in the rock scene is duly credited to the hardcore riff-meisters who are virtuosos of their craft. To earn praise from your most talented contemporaries in the field exceeds any material bounty. Metal guitarist prodigy Yngwie Malmsteen comments on AC/DC’s legendary lead guitarist Angus Young’s guitar play. Young has been known to add to AC/DC’s adrenaline driven performances with his own quirky energy, clad in his school uniform and beret, and his ever present duck walk while delivering face-melting riffs.

Down The Front Media: Yngwie Malmsteen is an undoubted pioneer, someone whose style and creativity has inspired so many others. Combining skills that span a vast spectrum of inspirations, he stands as a giant, melding melody, technique and an epic scope in a unique and inclusive fashion. Aside from the all the covers, there are also four original tracks, including Blue Lightning, included. And these clearly bring to the fore Malmsteen's abiding love for the Blues, as well as his capacity for doing interpretations possessed of emotion and depth. He offers, “I have always featured songs with a Blues groove on albums. So, having my own material in this vein was very natural for me.” Click the link to read https://www.downthefrontmedia.com/news/2019/3/26/yngwie-malmsteen-unveils-lyric-video-for-new-song-blue-lightning . . #yngwiemalmsteen #fender #marshallamps #seymourduncan #guitarlegend #guitarhero #dunlop #guitar #guitarsolo #guitarlessons #guitarrista #guitarist #guitarplayers #guitarworld #gibson #guitarstrings #joebonamassa #johnmayer #stevevai #zakkwylde #joesatriani #ledzeppelin #jimihendrix #jimihendrixexperience #aerosmith #metallica #guitarpedals #malmsteen @seymourduncanpickups @jimdunlopusa @marshallamps_uk @lewittaudio @fender @mascot_records

A post shared by Official Yngwie Malmsteen (@yngwiemalmsteen_official) on Mar 26, 2019 at 9:17am PDT

In an interview with Music Radar, Yngwie Malmsteen explains why he thinks Angus Young is a severely underrated guitarist. “He’s super-tasty and always good! It’s still blues, though, even when he does his big solo. Classical isn’t just little triplets here and there; it’s your entire mind being released from the pentatonic box – a linear kind of playing. And no-one really does that.”

Malmsteen also offered a compliment to rock and blues icon Eric Clapton, “I think maybe the first kind of blues I ever heard was John Mayall And The Bluesbreakers. I didn’t really even know who it was playing, but it kinda registered this was how you do the blues. And then Cream were really good… you could say it was the heavy metal for its time, for sure!

I don’t have any favourite Clapton solos as such, but there are certain songs like Stepping Out that I love. I’ve never met Eric Clapton, which is too bad because we’re both Strat and Ferrari men… he knows the deal, haha!”

Nothing beats a fellow artist who appreciates your craft with more gusto than the general public. We’re waiting on Angus Young’s reply on that one!