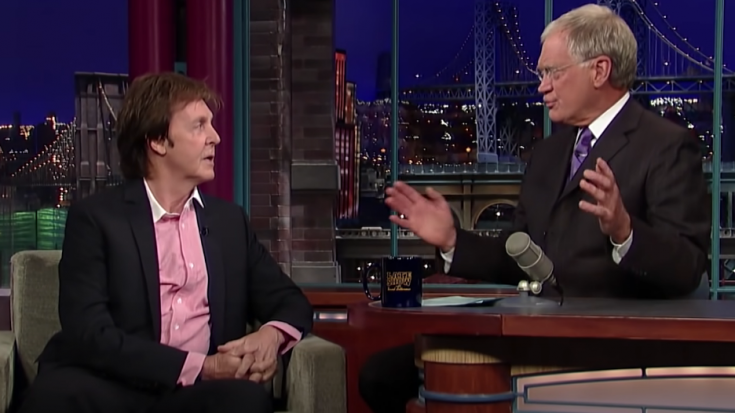 Very few people have made a mark in history much as The Beatles did. The group, who made their iconic US TV debut at The Ed Sullivan Show, have strengthened their Beatlemania from that moment on. Take a look as Paul McCartney relived the stories of the Fab Four’s success story with the video presented below.

McCartney visits Letterman, the same studio where The Beatles first held their Sullivan performance. During the interview, McCartney reveals how “scary” it was from that moment in their career. However, he didn’t feel the anxiety rising until his solo performance of his hit, “Yesterday,” when a floor director asked if he was nervous. McCartney said he isn’t, to which the director replied, “You should be, there’s 73 million people watching.”

Host David Letterman also said his thoughts on The Beatles’ career, which to him was like “a long spring break.” The musician agreed, and cited the band’s experience of going to Miami and totally loving the mood there. “The British car firm loaned us an MG each and, you know, there was a beach and sand and girls and, come on!” he exclaimed. There’s so much that you can do when you’re 22, indeed.

The host also digs deep into the friendship of McCartney and Michael Jackson, 2 of the greatest pop stars of the 80s. The duo was known for the hit songs with which they collaborated: “The Girl is Mine,” “Say Say Say,” and “The Man.” However, they somehow drifted apart due to business-related reasons, especially when Jackson became the owner of Lennon-McCartney’s publishing rights.

Watch Paul McCartney share the highlights of his career below.