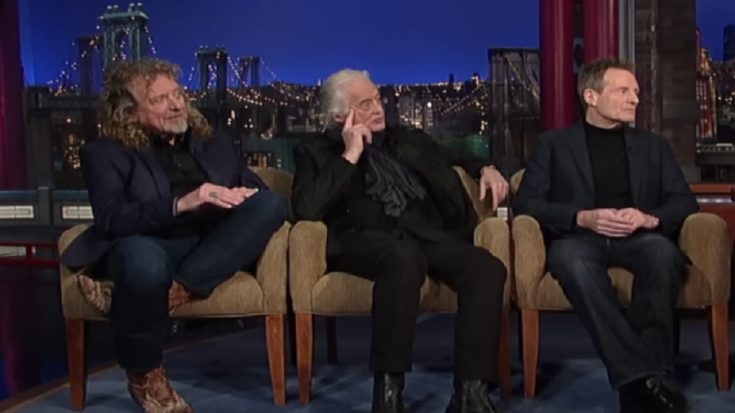 Led Zeppelin and Elvis Presley were the two most successful live performers of the 1970s, playing to sold-out crowds regularly. So, it isn’t such a surprise then when these two crossed paths at the time of their prime and just hang-out as acquaintances.

Back in 2012, The Late Show With David Letterman welcomed the three remaining members of Led Zeppelin: Jimmy Page, Robert Plant, and John Paul Jones for an interview, following their honor at the Kennedy Center Honors in which both were given recognition for their contributions in the entertainment industry.

In a deft move, Letterman stuck to safer topics, such as music. Page’s face beamed as he recalled how he and fellow Yardbird Jeff Beck used to listen to Buddy Guy’s Folk Festival of the Blues. He continued by saying that blues greats like Sonny Boy Williamson, Howlin’ Wolf, and Muddy Waters had an impact on him as these musicians were huge influences to the growth and popularity of blues music in the UK. Plant chimed in with some musical historical knowledge, praising the blues and rockabilly of Canned Heat, Gene Vincent, and Brian Setzer.

Moreover, the conversation swerved in on their glory days and how they met celebrities like Elvis in 1973. Without hesitation, Plant chimed in by saying “he had a lot of chicks,” to the audience’s delight. Letterman jokingly replied that this was something that Led Zeppelin and Presley would have in common. The whole conversation is funny and you may want to watch it below.