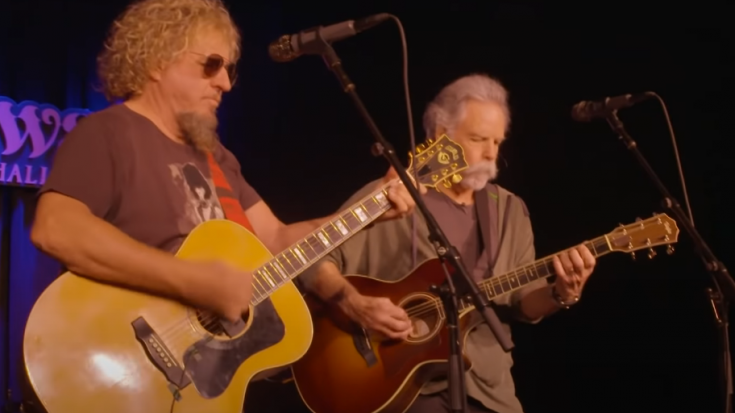 Rock and roll still live on as Sammy Hagar visits Bob Weir in Mill Valley for a nostalgic and fun episode of Rock and Roll Road Trip With Sammy Hagar. The video clip can be seen below.

“Sammy heads west to Mill Valley to catch up with Grateful Dead member, Bob Weir,” The caption reads. “They reminisce at the Sweetwater Music Hall and then take the stage for an acoustic performance.”

Weir talked about the moments of his career, which is enthralling to listen to. He shared some differences between the Grateful Dead, The Other Ones, and the Dead – three bands that repeatedly contained several members of the original group. Weir says that the members stuck together because their heroes were the same people and that “we make each other laugh.”

Hagar also went on to discuss the controversial use of drugs in the 60s, a thing that was the norm back in the era of the “peace and love movement.” Taking LSD or weed, Grateful Dead were there to witness it all; as they were also using them. But for Weir, the movement wasn’t just the drugs per se but says much more about the people at their creative peak.

“It wasn’t so much about the drugs or the dope or anything like that… everybody living there was kind of artsy,” Weir explained. “There was a spirit in the air and everybody was creative. We [Grateful Dead] were making music, people were making paintings, it was artistic kid’s ghetto.”

The artists then went on for an amazing performance of “Loose Lucy,” written by Jerry Garcia and Rob Hunter.