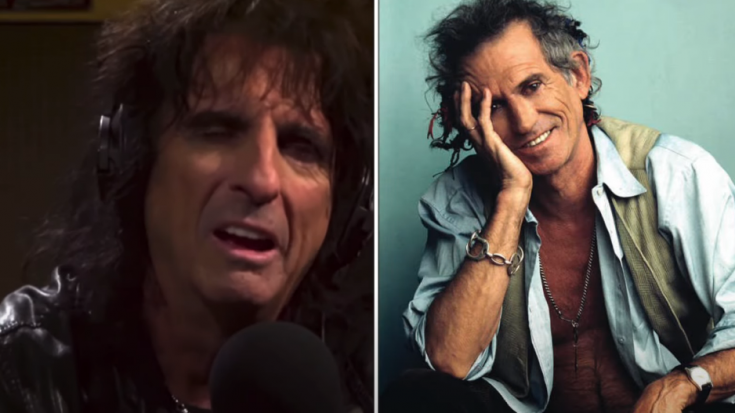 Take a look at this clip of Alice Cooper imitating Rolling Stones’ Keith Richards in an interview from The Ronnie Wood Show.

It seems as though Alice Cooper does have a knack for good impressions as he tried to imitate Richards while explaining why the guitarist never calls Cooper by his stage name. Cooper, whose real name is Vincent Damon Furnier, gave a scenario to host and fellow Rolling Stones’ guitarist Ronnie Wood with something that could tickle your funny veins.

In the 17-second clip, Cooper tells his story. “Keith [Richards] never called me Alice, ever. He’d always go [imitates Richards] ‘Vinnie, Vinnie, Vinnie, Vinnie.’ He says ‘How long has it been since you’ve had a drink?’ You know. And I said, well 20 years. And he goes ‘Ah, begs the question, why?” Both Wood and Cooper shared big laughs after the talk.

Richards is quite known as a rocker with a bad guy persona, always making trouble, and is the opposite of the Rolling Stones frontman Mick Jagger. It’s funny how Cooper, who’s friends with Richards, knew how to imitate the guitarist without the idea of mocking him. Perhaps that’s why Wood chuckled with him since he too, knew that the impression was a spot-on move.