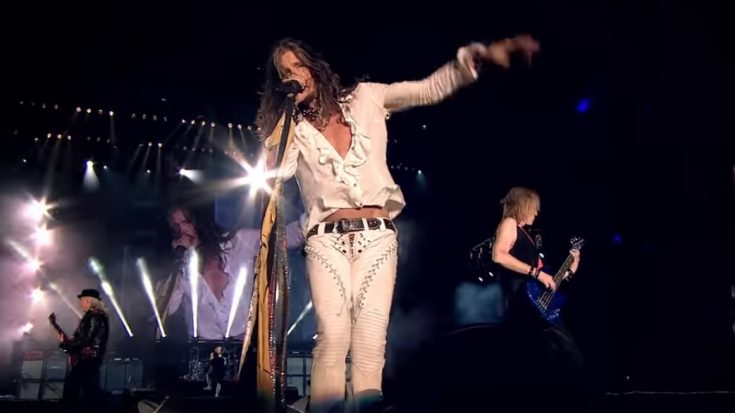 Aerosmith had a hot take for “Livin’ On The Edge” before being reunited with hip-hop collaborators Run D.M.C for a live rendition of their iconic “Walk This Way” record.

The band started off their set with the aforementioned 1993 hit tune, where Steven Tyler ran up to singer Lizzo for some assistance in the song’s chorus. Following the number was “Walk This Way”, with Run D.M.C entering the stage, reminiscent of the 1986 hit’s iconic video. The performance even stayed true with a nostalgic wall prop being knocked down in full effect. As the performance progressed, the joint act honored the late basketball superstar, Kobe Bryant, by holding up his legendary Lakers jersey.

Drummer Joey Kramer was visibly absent from the Grammy gig and MusiCares performance tribute earlier in the week, however. Kramer says he was excluded from band activities with a lawsuit, with John Douglas taking his place instead.

Kramer said the band forced him to do a re-audition of his position in a recent statement. “I am being deprived of the opportunity to be recognized along with my peers for our collective lifetime contributions to the music industry. Neither the MusiCares’ Person of the Year Award nor the Grammys’ Lifetime Achievement honors can ever be repeated,” Kramer said, expressing his frustration.

In a response statement, Aerosmith said: “Joey Kramer is our brother; his wellbeing is of paramount importance to us. However, he has not been emotionally and physically able to perform with the band, by his own admission, for the last six months. We have missed him and have encouraged him to rejoin us to play many times but apparently he has not felt ready to do so.”