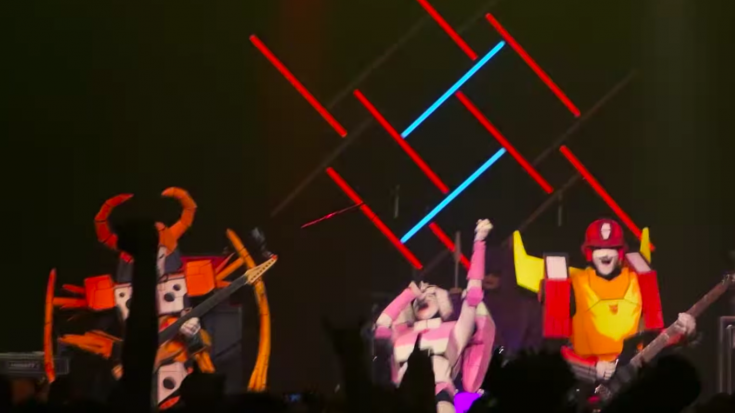 This sort of robotic-rock Transformers-themed covers band “The Cybertronic Spree” claims to come from the town of Iacon on planet Cybertron and the seven members of the band – Rumble, Arcee, Hot Rod, Spike Witwicky, Soundwave, Unicron and Quintesson – exclusively play songs from Transformers: The Movie.

So is  Led Zeppelin’s 1970 rock classic Immigrant Song part of the Transformers: The Movie soundtrack? Well, no. But the song does kinda fit the image of this theme-cover-band doesn’t it?

“The time has come to please the God of Thunder,” says the band. “So we get heavy AF in this live tribute to Led Zeppelin’s epic Immigrant Song. Because that’s what heroes do.”

So why wasn’t this Led Zeppelin classic included in the actual soundtrack of the movie? The answer is that it is very pricey to do so. Though the song has already taken on a life of its own since its original release in 1970, it has been famously covered by everyone including Trent Reznor, Megadeth, and Great White.

It’s also been used in film soundtracks like Thor:Ragnarok and also video games like Destiny: The Taken King. However, Led Zeppelin is notoriously picky about licensing their music for films and TV. Using the songs would usually cost hundreds of millions.

“I have a feeling if you want to entertain that idea of using their music, you have to have the money,” said Thor director Taika Waititi. “No negotiations. Offer it to them straight up.”

Covering it in costume? Priceless.