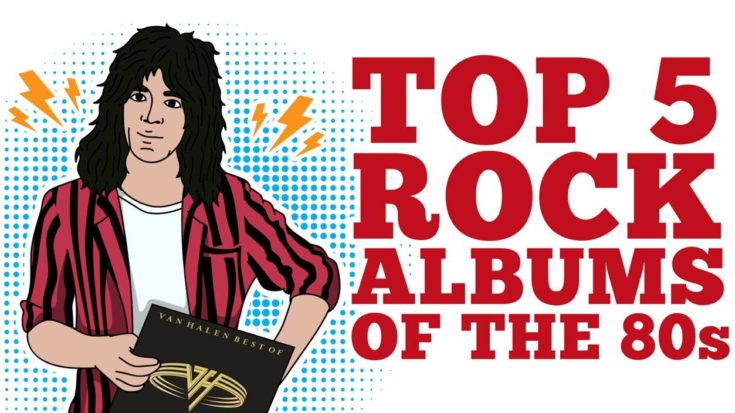 In this list, we’ve put Back in Black in the 5th spot because not every album can make a big impact for a band that just went through a very rough patch in their career and went on to be one of best selling albums in history. It reached No. 4 on the Billboard 200 and has gone on to sell more than 50 million copies. With a solid 10 tracklist, AC/DC came back strong and proved it’s not over!

The album was released less than six months after Bon Scott’s unfortunate death.  At this time Brian Johnson took the helm as the new frontman of the band.  In spite of the emotional bump they all had to go through, AC/DC didn’t go off balanced and went all emotional on the songs but stayed true to their hard rock-bluesy vibe.

Even new young listeners today would most recognize tracks “Back in Black” and “Shoot-to-Thrill” in the Iron Man 2 movie and slating them as timeless rock classics.

On our 4th spot. Rush’s Permanent Waves album. There will always be that turning point record for every artist. For Rush’s 7th album, some would say that it is one of the most underrated album but on the other hand maybe one of the strongest.  Rush is known for their style of involving multiple distinct sections and awesome long instrumentations but with Permanent Waves’ release, they debuted a more accessible or you could say “radio friendly” “more digestible” approach to their songs which contributed hugely to their album sales.

Permanent Waves became Rush’s first US top five album, hitting #4 on the Billboard 200, and their fifth Gold (later Platinum) selling album. Many would say that it was a hit to hit to hit album since they demonstrated quite a change. But why was it said to underappreciated at some point? One factor could be the next album Moving Pictures which soared better compared to Permanent Waves.

“Sure, Moving Pictures is Rush’s deemed classic album, but Permanent Waves seems to be ignored a lot because it was released right before Moving Pictures. Despite the drop-off in quality in the second part of the album (besides the magnificent Natural Science), Permanent Waves is easily one of Rush’s best albums, and is worth picking up if you’re a fan of Rush or prog rock in general. If you are unfamiliar with the genre, I’d listen to some of the more famous songs on here, The Spirit of Radio or Freewill to see if you will like this album or not. Regardless, it is an excellent album and has a well-deserved spot among the best progressive albums I own. ” –  Sir Grigor Domashevich

On our 3rd spot is the album that went 6 times platinum for Metallica. Back in 1984, listeners were treated to a more mature and technical approach to their songwriting. Introducing a melodic approach to songs like “Fade to Black” and the one and only “For Whom the Bell Tolls”,  that didn’t stop them from showing their versatility in this album with a later song “The Call of Ktulu” giving you a damn mind blowing nine minute instrumental.

According to an interview with Rolling Stone Ulrich has this to say when they were doing the record.

“It was the first time that the four of us wrote together and we got a chance to broaden our horizons. I don’t think it was a conscious effort to break away from anything musically. Obviously, listening to songs like “Fight Fire” and “Trapped Under Ice,” we were obviously still into the thrash type of stuff. But we were realizing you had to be careful that it didn’t become too limiting or one-dimensional.” -Rolling Stone

Released by American major record label Geffen Records, things might have gone differently when Geffen Records almost made Guns N’ Roses go back to the studio after the record hit 200,000 in sales. They wanted to cut their losses but didn’t expect that “Appetite for Destruction” would sell an outstanding 18million units in the US alone. Even today, Appetite for Destruction is arguably one of the most timeless albums of our time. Having songs that are concert staples and all around go to song for people to cover like Paradise City, Sweet Child of Mine, and Welcome To the Jungle, this album ceertainly deserves the 2nd spot to our list.

Taking the one spot on our list is none other than U2. With their massive sound enveloping your ears with “The Joshua Tree” album. This was the 5th studio album that the band released back in March 1987. The album was basically inspired by America. Sighting some references on tour experiences, politics, and literature. Who wouldn’t remember classics like “Where the Streets Have no Name” “With or Without You” “I Still Haven’t Found What I’m Looking For” right?

This groundbreaking album dominated all the major charts. From countries like Germany, Austria, France, Sweden, UK, US, and New Zealand, U2 was unstoppable in the peak of this record cycle. With one of their song  “With or Without You” hitting number 1 in Ireland, US, and Canada and number 2 in the Netherlands, number 4 in the UK, and number 5 in New Zealand. Have we mentioned that the album also received Diamond, Platinum, and multiple Gold Certifications in various countries around the world too. With 10 Million Units sold just in the US.