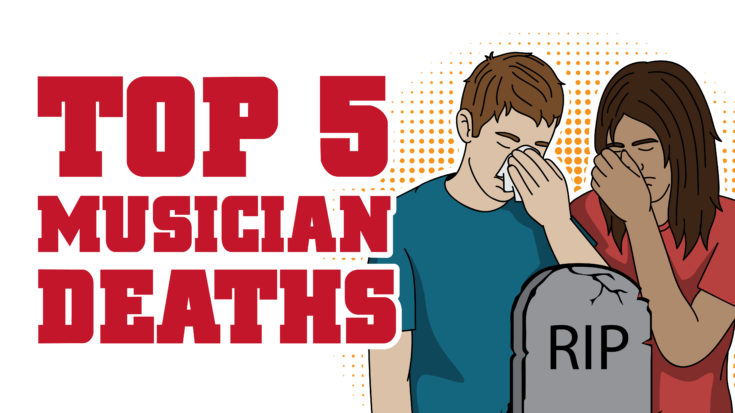 The Most Tragic Deaths In Rock

Just this year, we’ve had to deal with numerous deaths in rock – from Glen Campbell and Gregg Allman to Chuck Berry and Butch Trucks. It’s never easy and fans often take it personally especially when their songs helped them get through the toughest moments of their lives.

Rock ‘n roll never had a shortage of untimely and devastating tragedies but there are deaths which got to us way more than others. Maybe it was the manner in which the artist died or the timing but it’s heartbreaking all the same. If we learned anything from Chris Cornell and Chester Bennington, it’s that some of these rock acts are troubled and had to deal with their inner demons.

So we’re listing some of these saddest musician deaths which affected us in more ways than one. From suicide to accidents, get your tissues ready because this is some tearjerking, heart-wrenching stuff.

Janis Joplin may have been shy and insecure but on stage, she was electric. Her golden pipes were always lathered with raw emotion which made every rasp more spine-chilling. She was a troubled young lady and throughout her life, she battled with addiction to drugs and alcohol.

Prior to her death, she had that optimism she hasn’t felt in a while. Her latest album, Pearl, was almost complete, she got engaged to a well-off writer Seth Morgan and she was clean for months.

She died of an overdose after her supplier gave her heroin which was around 4-10x stronger than the average street dope. “Pearl” was release posthumously and it was an epic masterpiece. It was truly one of Janis’ finest musical moments and made everyone miss her so much more.

Another member of The 27 Club, Jimi Hendrix’s death was both tragic and controversial in ways you wouldn’t expect. He’s a rockstar so there’s bound to be plenty of media coverage but perhaps apart from those mourning this loss, there were people who believed it was not accidental.

Instead, there was allegedly a conspiracy. Some of them are plausible while others border on the ludicrous.

“The story of life is quicker than the wink of an eye. The story of love is hello and goodbye. Until we meet again.” – Jimi Hendrix’s final poem, The Story of Life

It was Jimi’s then-girlfriend Monika Dannemann who found him in bed, breathing but unresponsive. He was immediately brought to the hospital but was dead on arrival.

Some say it was his manager who murdered him because of a $2-million life insurance policy. Others claim it was the CIA who waterboarded him with red wine. Either way, we lost a great musician way too soon.

Death has a funny way of arriving on your front door. You see, Jim Croce had a lot going on for him in 1973 – from scoring a spot in album charts and earning his first #1 hit to having his songs used in films.

But even with the success of his extensive tour, he was getting drained and longed to spend more time with his wife and son. He wrote to her saying he wanted to stick to writing short stories and scripts instead of making music.

“Jim was prolific beyond prolific. There was never a time when we weren’t doing music – 12 hours a day, minimum. But I think that Jim was really getting into writing, and he wanted to do movies.” – Ingrid Croce

On September 20, 1973, Jim was on his way to his next show via a small chartered plane when it crashed due to pilot error. His note to his wife arrived after his death and he wrote as closing, “Remember, it’s the first 60 years that count and I’ve got 30 to go. I love you.”

Just because Elliott Smith didn’t shy away from talking about suicide didn’t make his death less tragic. He was deeply troubled – he battled addiction to drugs and alcohol and also suffered from depression.

His songs reflected his thoughts and emotions thus, his lyrics were often dark and ominous.

“I couldn’t do the first step […] I couldn’t say what you were supposed to say and mean it.” – Elliott Smith on rehab programs

A few months before his death, he was noticeably improving. He gave up alcohol and other unhealthy stuff in his diet. On October 21, 2003, Elliott died due to multiple stab wounds to his chest.

At the time, he was with his live in partner Jennifer Chiba and they were in the middle of an argument when she locked herself in the bathroom. After hearing him scream, she opened the door and saw Elliott with a knife in his chest.

It was unclear whether it was homicide or suicide especially since a post-it note was found that said: “I’m so sorry—love, Elliott. God forgive me.”

Badfinger was slated to be “the next Beatles” and had links to The Fab Four – George Harrison co-produced one of their albums and Tom Evans and Joey Holland both played on John Lennon’s “Imagine.” They had four global hits, one of which was used by the popular TV series “Breaking Bad.”

There were legal and financial problems left and right and with his girlfriend pregnant with their child, Pete Ham was driven to commit suicide on April 24, 1975 after learning that all his money disappeared. He hung himself in his studio and his suicide note blamed their manager for his struggles.

“Anne, I love you. Blair, I love you. I will not be allowed to love and trust everybody. This is better. Pete. P.S. Stan Polley is a soulless bastard. I will take him with me.” – Pete Ham’s suicide letter

On November 19, 1983, Tom Evans hung himself in his home garden. This is after other people wanted a share of his songwriting royalties.

Badfinger was supposed to be the next big thing but they ended up as two of the most tragic deaths in the history of rock ‘n roll.