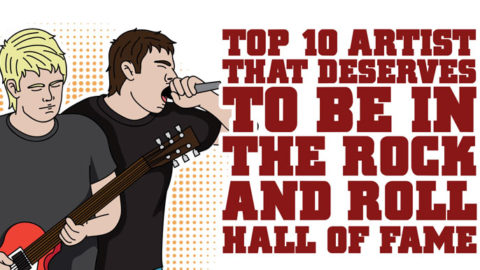 Every time the new inductees march into the Rock and Roll Hall of Fame, we can’t help but remember those artists who are continuously snubbed and not given the recognition they so rightfully deserve. The moment the roster comes out, we can practically hear the collective sigh and scoff of fans of those who didn’t make the cut.

Here’s our list of 10 rock acts awaiting their call and we threw in some reasons WHY they should be included in the next list.

“It wasn’t just his mighty pipes that made him Ronnie James Dio — it was his moral fervor…what always stood out was Dio’s raging compassion for the lost rock & roll children in his audience. Dio never pretended to be one of the kids — he sang as an adult assuring us that we weren’t alone in our suffering, and some day we might even be proud of conquering it.” – The Rolling Stone Magazine

His hometown Cortland, New York even has a street named after him. It’s not like we need any more affirmation of his well-deserved legendary status but hey, we’d love to see the Rock and Roll Hall of Fame come around and finally recognize his greatness. Besides, Black Sabbath was inducted last 2006 so….

What would it take for the Rock and Roll Hall of Fame to recognize Motorhead? They sold millions of records worldwide and the fact that Metallica (who was inducted in 2009) often cites Motorhead’s influence, you just have to wonder why they are still being snubbed.

Lemmy Kilmister and the rest of the power trio fused punk rock with metal and is credited with a longstanding influence on the younger generation of musicians.

“With the passing of Lemmy, it’s really, really important for me to see MOTÖRHEAD acknowledged in that, ’cause there’s no more rock and roll person on this planet than Lemmy and MOTÖRHEAD.” – James Hetfield

Lemmy Kilmister might no longer be there to accept the honor should the Rock and Roll Hall of Fame decide to finally induct them but better late than never. Motorhead is one of those groups that don’t really need further explanation why they deserve a spot in the next roster.

No matter what the excuse it, we just cannot fathom the fact that they still didn’t make it into roster. Just why? They are one of the greatest hard rock acts of all time and they’re widely considered as pioneers in several rock subgenres.

They’ve sold more than 20 million albums worldwide and had one stellar record after another.

“I don’t know their rules or criteria. but there are so many people that deserve to be in there that aren’t. And there are a lot of people who aren’t rock ‘n rollers who are in there…. We are passed over every year.” – BOC’s Eric Bloom

Every single heavy metal group that followed Blue Oyster Cult has some sort of debt to them. They were commercially successful but they also had significant contributions to further development and popularity of music videos since “Burnin’ For You” received heavy rotation on MTV.

Actually, we can go on and on why they deserve the recognition, they’re THAT great.

Whatever the excuse is why Iron Maiden is still being snubbed, we don’t want to hear it because it will only lead to more frustration. Heck, the only time we agreed with Lars Ulrich was when he said he wants to see Iron Maiden inducted into the Rock and Roll Hall of Fame.

We can never get over this glaring omission. The band has been consistent in their sound and style, sold more than 90 million records worldwide and is considered both successful and influential.

From sold out shows to sales of epic proportions, we’ll have to agree when hardcore fans claim that Iron Maiden has no peers. The Hall doesn’t seem to enjoy heavy metal that much because there’s no solid argument in case anyone dares to object this induction.

There are so many bands which are easy to forget just how awesome they are. Bad Company is one of them. To be fair to The Hall, this hard rock supergroup is relatively easy to overlook but you’d think someone would point out this inexcusable omission after a few years.

They’re successful, produced plenty of classic hits, and highly influential. So, why are they still in the snubbed list?

“We were trying to create the best music we could possibly make. The only expectation came from ourselves and it was a pleasant surprise to find other people liked it too.” – Paul Rodgers

They’re gritty and edgy. Plus, they’re successful and influential, not to mention solid and consistent. We don’t exactly know the criteria as to who makes the cut but to ignore Bad Company for more than 15 years is pretty unforgivable. Even Paul Rodgers deserves the recognition – the man is incredibly talented.`

We’ll go ahead and add Jethro Tull to the backlog of rock acts which has been unfairly passed over. We have to admit though, as we near #1, we are getting more and more frustrated. But seriously, who wouldn’t be? You may not be huge fans of these artists but it’s hard to deny their influence and “worthiness” to be part of the list.

Fusing folk with hard rock, Jethro Tull is the prog band to end prog bands. But if we’re worried and pissed, it doesn’t bother Ian Anderson one bit.

“It would be nice to be able to not talk about Grammys full stop, and even more so, the American Rock and Roll Hall Of Fame. I mean, I find these (events) really rather tedious.” – Ian Anderson

Even lead guitarist Martin Barre won’t lose sleep over it.

“When our time comes, I look forward to it. If it never happens, that’s fine too.” – Martin Barre

From stellar live performances to impressive loyal following, it’s understandable why people are angry over this particular snub.

For Def Leppard, we don’t even know where to begin. Minus the Taylor Swift collaboration, or maybe even if you include that, this rock band is a legend. From achieving mainstream success (more than 20 million sales worldwide) and being a household name to a solid group worthy of being included in The Hall’s roster.

How many can turn an accident to an opportunity to change their sound and style which, no matter how you look at it, makes their legendary status even more impressive?

Even Joe Elliott had some choice words for The Hall.

“When you get inducted into the Rock and Roll Hall of Fame, the next day you wake up in the same bed. You don’t get tours thrown at you to open for Led Zeppelin or find out Paul McCartney wants to write a song with you. It’s rubbish. There’s no gain from it.” – Joe Elliott

Def Leppard is more than eligible for the inclusion and like so many others on this list, we have no idea why they were overlooked. But should The Hall come around and induct the band, Joe Elliott said they would “politely refuse.”

You probably noticed by now that The Hall isn’t very kind with all things metal. Besides, Slayer needs no introduction. They received gold and multi-platinum certifications from the RIAA and Grammy nominations with two wins. Unless you’re living under a rock, this band is just hard to ignore even more so if you’re part of The Hall.

The thing is, they’re one of “The Big Four of Thrash Metal” alongside Metallica which as you may recall, was already inducted in 2009. That only made this omission even more annoying.

“I’m not making a ploy to get in, but it makes me think, ‘Man, I hope they call my name one of these days.’ I think it took them a long time to get METALLICA in there. But METALLICA basically opens door for us, because when you think of metal who do you think of next from that generation? Of course there’s [BLACK] SABBATH, [JUDAS] PRIEST and [IRON] MAIDEN, without question. But for the ‘Big Four,’ you think METALLICA… We’ve always been number two on the ‘Big Four’ shows. So come on, Rock Hall, give us that call! We’re ready! I’ll donate some change or something. [Laughs]” – Kerry King

So you see, some may have given The Hall some tongue-lashing but not Kerry King. He definitely seems excited and we don’t want him to be disappointed. They’ve been snubbed for years now so here’s to hoping they’ll make it on the class of 2018.

Tom Scholz’s rock band has sold more than 70 million records worldwide and their hits are considered classic rock staples. Boston’s influence on other musicians is undeniable. Besides, Scholz is not your average musician – he happened to invent a portable guitar amplifier too.

When you play any Boston song, you’re getting pure, undiluted rock ‘n roll.

“I certainly had no thoughts and entertained no hope of anybody ever paying 10 seconds worth of attention to what I was doing. I was doing it because I liked it, and I thought, Well, maybe there’s a group of people out there who would like this, too.” – Tom Scholz

Tom Scholz wanted to create the “perfect” rock sound for him and so he spent years doing just that. Obviously, it paid off big time and while they already have the success they so rightly deserve, it would be nice if they also got some recognition from The Hall.

This should be VERY interesting. Dire Straits sold more than 100 million records worldwide making them one of the most commercially successful groups of all time. They also received multiple nominations and awards.

Besides, any rock band who managed to break through in an era of disco and punk must be doing something right. In a nutshell, they deserve their legendary status.

No explanation is acceptable or logical enough for this glaring omission. You can just imagine the conversations in The Hall.

“That’s just what interested me at the time, having this little group. I wanted a vehicle for the songs, but I wanted it to be stripped down.” – Mark Knopfler

If we had to list down Dire Straits’ contribution to rock, we’d be here all day. So if anyone starts a petition to induct these guys, count us in because we’d definitely sign up.