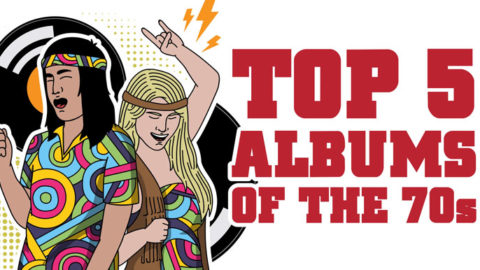 Choosing just 10 of the greatest albums of the highly diverse decade of the ’70s is no mean feat, let alone handpicking only five. It was one of the best times in music history – singer/songwriters were becoming popular, other subgenres like country rock and punk were also on the rise, psychedelia’s finest acts were at the top of their game, and some musicians released more than one stellar album.

It’s not an easy job but somebody’s got to do it. It broke our hearts to see a few of our classic rock favorites bumped out of the list which left us with nothing but the crème de la crème. Let’s check it out.

“Back in Black” is hands-down their best album but we can’t discount the fact that “Highway to Hell” was the work of the Young brothers at their absolute best. But of course, Bon Scott being Bon Scott, he unleashed the kind of raw and primal energy that made this an instant favorite of every single metalhead.

It was hard to shake it off your system.

“…just because you call an album Highway to Hell you get all kinds of grief. And all we’d done is describe what it’s like to be on the road for four years, like we’d been. A lot of it was bus and car touring, with no real break. You crawl off the bus at four o’clock in the morning, and some journalist’s doing a story and he says, ‘What would you call an AC/DC tour?’ Well, it was a highway to hell. It really was. When you’re sleeping with the singer’s socks two inches from your nose, that’s pretty close to hell.” – Angus Young

“Highway to Hell” had a certain precision that their previous albums lacked. It was on another level, for sure. And even with all its greatness, one of the things it will always be remembered for is being Bon Scott’s final album before his tragic death.

It’s the concept album that featured David Bowie’s androgynous bisexual rock star alter ego. This is what we meant when we mentioned diversity earlier because we just went from hard rock to glam.

“The Rise and Fall of Ziggy Stardust and the Spiders from Mars” is widely considered as Bowie’s breakthrough album and not only did it sell more than 7 million copies worldwide but it also received critical acclaim and even ranked no. 35 on the Rolling Stone Magazine’s list of The Greatest Albums of all Time.

It was definitely ambitious but Bowie never did anything half-baked – it was always go big or go home. The album was flamboyant and outrageous but coherent nonetheless.

Throughout his entire career, Bob Dylan has had highs and lows – even a great poet and songwriter such as him also made albums which were deemed lifeless and eventually hated on even by his most loyal fans. But one thing about the man is his fearlessness when it comes to reinvention.

“Blood on the Tracks” is one of his finest works and perhaps his most personal too – some of the songs were said to be about his then-wife Sara and their relationship problems. It was even dubbed as “the truest, most honest account of a love affair from tip to stern ever put down on magnetic tape.”

“Blood on the Tracks is pleasing and complete enough to visit repeatedly, until the syllables become words, the words resolve into meanings, and all of it becomes internalized, a space accessible even without the presence of the album.” – Pitchfork’s Jesse Jarnow

Dylan’s “breakup album” was charged with emotions and it was the closest thing we have to seeing Dylan in all his emotional nakedness.

The Clash’s double album is one epic masterpiece – it wasn’t a straightforward punk rock album, a genre which the band was known for. Instead, they incorporated a wide array of musical styles like reggae, R&B, jazz, rockabilly, hard rock and pop. It pushed boundaries and while it was a huge risk, it definitely paid off in the end.

It sold more than five million copies worldwide, received widespread critical acclaim and landed on the 8th spot in the Rolling Stone magazine’s list of The 500 Greatest Albums of All Time.

“This is an album that captures all the Clash’s primal energy, combines it with a brilliant production job by Guy Stevens and reveals depths of invention and creativity barely suggested by the band’s previous work.” – The New York Times’ John Rockwell

It was the rock ‘n roll rebellion that rocked harder than any other double album. It was intense, powerful, stunning and aggressive – not one you could forget so easily after listening to once.

Is this the greatest rock album ever made? Possibly. But one thing’s for sure, it’s one of the best records the ‘70s had to offer. It’s Led Zeppelin’s magnum opus and the perfect clapback to all their critics – who only saw them as nothing more than a “hype.”

“IV” or “ZoSo” or “Four Symbols” was coherent, dramatic and in more ways than one, magical.

“… and a couple of songs that when all is said and done, will probably be right up there in the gold-starred hierarchy of put ’em on and play ’em again.” – The Rolling Stone’s Lenny Kaye

It sold more than 23 million copies worldwide and contained some of their most popular songs like “Black Dog,” “Stairway to Heaven,” and “Rock and Roll.” If anything, this album only goes to show that Led Zeppelin is a legend among rock gods and practically untouchable. They left everyone in the dust.

Darkside of the Moon- Pink Floyd