99% of People Get These 10 Classic Rock Lyrics All Wrong 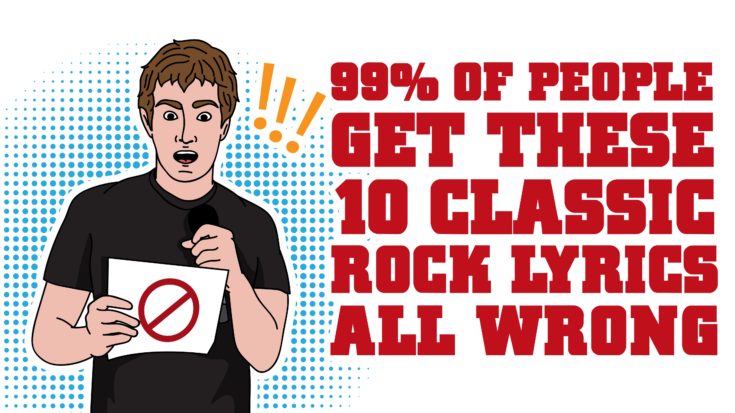 If people could stop butchering these songs, that’d be great

We’re all guilty of singing the wrong words to our favorite songs at least once in our lives. And unless we saw the right lyrics or heard someone sing it correctly, we’re likely to stick with what we think we know. Sometimes though, singers have a way of making the words almost indecipherable. But at other times, listeners just have pretty wild imaginations.

To be fair, some of these mistakes are forgivable given that the correct words sound exactly like the misheard one.

Check out how many you misheard and relish the fact that you’re not alone.

This danceable rock song may have been a huge hit and an anthem to all teens when it was released but that doesn’t guarantee everyone knows the right lyrics.

From the title alone, you know it’s going to be about sex. Even Bryan Adams admitted that the song is about making love during summer. And so singing the wrong words is quite understandable.

“It’s a very simple song about looking back on the summertime and making love. For me, the ’69 was a metaphor for making love not about the year. I had someone in Spain ask me once why I wrote the first line ‘I had my first real sex dream’… I had to laugh.” – Bryan Adams

Well at least YOU didn’t ask the man himself and therefore saved yourself the embarrassment of mishearing that particular verse.

“Naked” and Bon Jovi go so well together we’re tempted to let this slide. That word just becomes extra sexy coming off his lips but sadly, he didn’t sing that one. The correct lyrics are, well, more wholesome. Besides, it’s his signature song so butchering it should be a crime.

“I think the most interesting part of that song, it was the first time we ever used characters. And quite frankly it was because in our life at that point, in that juncture of time, we were 26 years old. I was. Jon was probably 24 at the time. And all we knew at that point was being on the road and women, so that’s predominantly what we kind of sang about in those days.” – Richie Sambora

We can’t even begin to count how many times we put it on repeat during drunken karaoke nights. It’s a classic favorite and we don’t mind listening to off-key singing just as long as you get the words right.

8. Dire Straits – “Money for Nothing”

Would you choose chips over chicks? Maybe. And for a song that talks about color TVs and microwave ovens, it’s not exactly far-fetched. It was controversial at the time of its release because of its allegedly homophobic lyrics.

“I got an objection from the editor of a gay newspaper in London – he actually said it was below the belt. Apart from the fact that there are stupid gay people as well as stupid other people, it suggests that maybe you can’t let it have so many meanings – you have to be direct. In fact, I’m still in two minds as to whether it’s a good idea to write songs that aren’t in the first person, to take on other characters. The singer in “Money for Nothing” is a real ignoramus, hard hat mentality – somebody who sees everything in financial terms. I mean, this guy has a grudging respect for rock stars. He sees it in terms of, well, that’s not working and yet the guy’s rich: that’s a good scam. He isn’t sneering.” – Mark Knopfler addressing the controversy

It’s easy to make this mistake and perhaps anyone who attempts to sing it might trade chicks with chips. This blunder isn’t exactly as massive as “We built this city on sausage rolls.” At least, that’s if you try to look on the brighter side.

Whether it’s The Eurhythmic’s version or Marilyn Manson’s, the mistake remains the same. But seriously though, we’d love to dream of cheese – the oozy, gooey, melty kind. The thing is, this isn’t just misheard lyrics. Someone actually had enough time on his hands to make an entire parody song.

And, can we just admit that we totally sang this one:

We must say, we’re pretty impressed by the writer’s creativity. And replacing the words in Manson’s dark and ominous version, we find it absolutely hilarious.

Oh come on, just because these boys are British doesn’t mean there has to be “tea” in there somewhere. Besides, that doesn’t even make any sense. And just out of curiosity, we Googled “warm sausage tea” and the only results are those in connection to Queen’s “Bohemian Rhapsody.”

Wow, we had no idea THAT many people heard it wrong.

“It’s one of those songs which has such a fantasy feel about it. I think people should just listen to it, think about it, and then make up their own minds as to what it says to them… “Bohemian Rhapsody” didn’t just come out of thin air. I did a bit of research although it was tongue-in-cheek and mock opera. Why not?” – Freddie Mercury

Since we don’t know what “Scaramouche” is, that’s probably the reason why there are those who think that “warm sausage tea” doesn’t need to mean anything to be included in this musical masterpiece.

Okay, the ridiculous meter just went ding, ding, ding. But really now, how many drunk friends have you heard sing the wrong words during sing-along sessions? We know it sounds so funny but still, you won’t believe the people who actually think Kurt Cobain sings about containers in this rock anthem.

“I was trying to write the ultimate pop song. I was basically trying to rip off the Pixies. I have to admit it. When I heard the Pixies for the first time, I connected with that band so heavily that I should have been in that band—or at least a Pixies cover band. We used their sense of dynamics, being soft and quiet and then loud and hard.” – Kurt Cobain

We tried singing it and we must say though, “in containers” kind of works when you try to semi-scream and all. And with enough bravado , you can actually pull it off of course as long as you properly channel Cobain while you’re at it.

Can you imagine this great poet and legendary singer-songwriter entice a woman to lay on his, erm,, breast and all the while singing with his distinctive low croon? Why though? Not only does it make absolutely no sense but it just doesn’t fit the whole song, like seriously.

“It’s a very black song – very soulful and sensual. “Lay across my big brass bed” is a lyric you would expect to hear from Isaac Hayes. The beautiful thing about Dylan is that he is such a chameleon. He’s got so many characters inside of him, like a painter with limitless amounts of color.” – Lenny Kravitz on “Lay Lady Lay”

It’s a beautiful song and the last thing we want is for someone to butcher the lyrics. Come on people, listen closely or better yet, Google it.

Poor Tony Danza, he probably has no idea people have been singing his name for years. Oh wait, maybe he does. He actually hated it when someone called him Tony “Tiny” Danza. But hey, we could have sworn this started with someone who decided to troll his friends by singing the wrong lyrics and it just caught on.

“Jeffrey Katzenberg called me and said, “There’s a scene in this film which is going to make ‘Tiny Dancer’ a hit all over again.” When I saw it, I said, “Oh, my God!” I used to play “Tiny Dancer” in England and it would go down like a lead zeppelin. Cam¬eron resurrected that song.” – Elton John

Just in case you’re wondering who the real Tony Danza is, he’s a professional boxer and an actor too. We still can’t help but wonder what he thinks of the song.

Don’t feel bad if you misheard it because someone else made the same mistake – Bob Dylan. And imagine his surprise when he found out none of The Fab Four ever smoked marijuana. Also, it was John Lennon who “corrected” the lyrics.

Man, what we’d do to witness that moment.

“We were in Jane Asher’s house, downstairs in the cellar playing on the piano at the same time. And we had, ‘Oh you-u-u… got that something…’ And Paul hits this chord and I turn to him and say, ‘That’s it!’ I said, ‘Do that again!’ In those days, we really used to absolutely write like that – both playing into each other’s nose.” – John Lennon

This isn’t the first Beatles song with misheard lyrics because with their extensive catalogue, someone’s bound to hear it wrong then repeat that to his friends and then that’s how it begins. Oh and for “Lucy in the Sky with Diamonds,” it’s “The girl with kaleidoscope eyes” and not “The girl with colitis goes by.” Geez.

We’re all guilty of singing these words at least once or until someone else corrected us. Then again, while we see nothing wrong with Jimi Hendrix kissing a guy, we just deem it as our responsibility to let people know what the actual lyrics are.

And the thing is, this is so common that there’s even a website dedicated to misheard songs called “KissThisGuy.com” and it’s one of our favorite internet discoveries to date.

“You know the song we had named ‘Purple Haze’? [It] had about a thousand, thousand words … I had it all written out. It was about going through, through this land. This mythical … because that’s what I like to do is write a lot of mythical scenes. You know, like the history of the wars on Neptune.” – Jimi Hendrix

This list just won’t be complete with Jimi Hendrix’s best known song. And it’s always the first one to cross our mind when we think “misheard lyrics.”