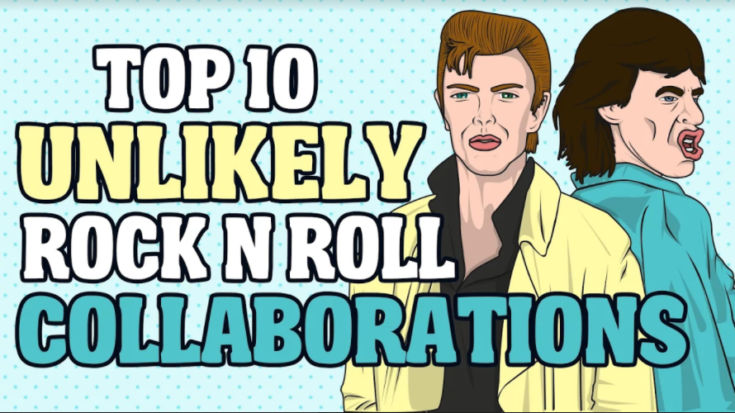 By “unlikely,” we mean that not in a million years did we ever think the following artists would ever consider collaborating, let alone actually doing it. For some, it’s a pleasant surprise and it’s definitely a match made in music heaven. Like peanut butter and jelly if you will, they go so well together. On the other side of the spectrum are the “honey on pizza” – they shouldn’t be allowed within three feet of each other and they don’t even belong in the same sentence.

Still, the shock factor was there. And the duets ended in either of two things – massive success for all artists involved or failure of epic proportions. Either way, it’s forgivable because even the greatest rockstars make mistakes every now and then. Then again, most of those who made it on this list are musical gems. It’s as if the rock gods from heaven suddenly gave us something we never thought we wanted. And well, it’s served on a golden platter, no less.

Some things make you question the purpose of their existence, this song is one of them. To be fair, we love Meat Loaf but this is clearly not his finest musical moment. If we’re feeling kind, we’d call this ‘disappointing’ especially because the album itself was Meat Loaf’s attempt to replicate the success of “Bat Out Of Hell.” Sadly, it fell way below everyone’s expectations.

Maybe that’s the only downside to having a massive hit – it’s never easy to follow that up. Besides, it does say a lot when Meat Loaf and Cher have NEVER performed this live together. That’s weird, right?

“This unique blend of vocal and instrumental firepower makes ‘Dead Ringer For Love’ feel like a long-lost outtake from the Grease soundtrack on steroids.” – AllMusic’s William Ruhlmann

While it’s not exactly THAT bad, we also can’t sing its praises. They’re an unlikely duo, that’s for sure, and we totally understand Cher never singing this – at least, there’s no footage of her ever doing so.

Some collaborations look good on paper but when the plans are set in motion, it’s nothing short of disappointing. Take the infamous “Lulu” album by Lou Reed and Metallica. He’s a rock legend and they’re heavy metal icons – it’s not exactly such a huge crossover and definitely not a recipe for disaster. Sadly though, that’s what happened.

“Lou and us – we’re kindred souls. We both have a clear vision of what you should sound like and say. Also, he has an edge that totally fits. He speaks our language, slightly sarcastic and blunt, like another pea in the pod.” – Kirk Hammett

Despite the obvious connection and how their sessions seemed like they were having fun and liking the result, both critics and fans weren’t that forgiving when the album was released. It was often cited as the worst collaboration ever.

It wasn’t their best and it sounds confusing. It wouldn’t make a dent in rock history if this never came out.

Oh god Mick Jagger, what are you doing? Go back, you don’t belong here! In case you watched the whole video, skip to the later half because that’s where Jagger makes his appearance. If someone told us Jagger would someday be part of an electro-hop song, we’d probably laugh out loud. There was no way this legendary rocker would do something so bizarre.

“You play your music and the first thing someone says, ‘Who’s gonna be on it?’ So I think of the hardest thing ever. And it happened, Mick Jagger. I just wanted to throw something out there that I thought could never be possible so they would stop asking me.” – will.i.am

There’s really not much to say here because you have to listen for yourself. It’s monotonous and repetitive – something you’d expect from electro-hop music. Jagger’s addition to the track is what it seemed on the video – an afterthought.

A hard rock anthem with a country singer? It’s not something you’d expect to work but incredibly so, it did. The catchy tune and raspy vocals – everything blends smoothly. It’s like adding peanut butter to your burger, sounds mediocre at best but is surprisingly good and makes you think why no one thought of it sooner.

It was refreshing but let’s be fair, they were the best artists country music and hard rock had to offer.

“We didn’t start with any preconceived notions about the song. Each of us brought something different to the table and we drew on each others influence to finish it out. They are simply one of the best rock bands ever and it was a great time working together.” – Tim McGraw

How did these artists connect, by the way? Tim McGraw’s road manager is Robert Allen who is the brother of Def Leppard’s Rick Allen. And that’s pretty much how their collaboration started. McGraw didn’t just record and perform the song with the group, he also co-wrote it.

This is what happens when an electronic music duo collaborates with the Godfather of Punk. And our ultimate question is: but… did it work? Yes, it actually sounds good even the skeptics and harsh critics would agree. And can we just add, this is one of Iggy Pop’s best musical collaborations too.

Also, it’s Iggy Pop so there’s no such thing as crazy or shocking. Like the opening lyrics where he goes, “Aisha, we’ve only just met and I think you ought to know: I’m a murderer.”

“I was fourteen years old then and I was wondering what it was like being there in that place and making the kind of music they were making. I thought that was absolutely fascinating.” – Death in Vegas’ Tim Holmes on seeing Iggy Pop

One thing we love about Iggy Pop is his versatility – the man can work with anyone and the result would be amazing. And “Aisha” is a solid piece of proof.

Robert Plant and Alison Krauss didn’t just collaborate for one song but an entire album. Maybe from the get-go, longtime Led Zeppelin fans weren’t too thrilled. That’s understandable because Plant is considered as one of the greatest frontmen and vocalist in rock while Krauss is a well-known bluegrass country singer. Lots of things could go wrong, right?

Well, not only did they prove all the haters wrong but apparently, the record was so good they received critical acclaim and FIVE Grammy Awards!

“I was basically tutored by Alison. She’s a very precise singer who’s done more duets than you can shake a stick at, and I was thinking: help, I’m a rock singer, no matter what I do. But, of course, I’m not: I’m just a guy that sings songs.” – Robert Plant

Their vocal performance ranges somewhere between magical and hauntingly beautiful. It was effortless and their chemistry was just incredible.

This isn’t exactly as insanely shocking as the others because collaborations between pop and rock icons aren’t unusual. Still, if we had to name an unlikely musical pairing, it would have to be this. But the thing is, they collaborated not only once or twice but THRICE and for each time, they scored massive success!

“The Girl is Mine” and “Say, Say, Say” were chart-toppers. Their third duet was called “The Man” and it became pretty obvious that the two had excellent chemistry while recording. Sadly, their relationship outside the studio was going down the drain.

“He was a massively talented boy-man with a gentle soul. His music will be remembered forever, and my memories of our time together will be happy ones.” – Paul McCartney on Michael Jackson

Their bad blood was all because The King of Pop bought the publishing rights to The Beatles’ songs which McCartney also wanted to buy. That became the end of their collaborations.

3. Johnny Cash and Bob Dylan – “Girl from the North Country”

Johnny Cash and Bob Dylan had more than three decades of friendship. They had deep respect for each other and one time, Cash even gave Dylan one of his guitars. And so it was inevitable that at one point, they will find themselves across from each other at a recording studio.

They didn’t plan it or anything. It just so happened that Cash was in the next door of the studio Dylan used. Call it fate or whatever but what are the odds of Dylan recording in Cash’s hometown?

“They had been writing letters for awhile before, and they were in New York City. Bob came in the hotel room, jumped up and down on the bed and said, ‘I met Johnny Cash!’ just like a little kid. They had a friendship that was based on humor.” – John Carter Cash on Bob Dylan and Johnny Cash’s friendship

It wasn’t a flawless recording – it’s basically what you’d expect from an impromptu jamming. There are mistakes but then again, it’s the unlikely collaboration we’ve always wanted. Who cares if it’s not perfect?

2. Mick Jagger and David Bowie – “Dancing in the Street”

Just because some rockstars have big onstage personalities doesn’t necessarily mean they will have big egos. Case in point, David Bowie’s work on “Under Pressure” with Freddie Mercury was simply stellar. But apparently, that doesn’t happen all the time. Just take a look at this cringe-worthy music video of “Dancing in the Street” where it’s clear Bowie and Mick Jagger were trying to upstage one another.

It’s all for a charitable cause and for that, we can let this slide.

“We banged it out in just two takes. It was an interesting exercise in how you can do something without worrying too much.” – Mick Jagger

The song itself is actually nice because Jagger and Bowie are legends for a reason. It’s surprisingly good, to be honest. The only issue people had is the MV which some even called the “worst music video of all time.” Although we still think that’s a gross exaggeration.

This is rock’s ultimate odd couple who surprised us big time. Besides, what could a rock band and hiphop group have in common? The answer is absolutely nothing. It sounds like a bad idea from the get-go.

And then the song dropped and we were all like, “What sorcery is this?” It was so good that it was a win-win for both acts. Run-DMC broke into mainstream and in turn, the track practically revived Aerosmith’s dying career. Okay, maybe ‘dying’ is an overstatement but you see, people weren’t too crazy about them in the ‘80s anymore.

“Run and D and Jay were huddled in a corner, really intent on something. I go, ‘Joe, what are they doing?’ He says, ‘Probably smoking crack.’ Later we went over to the corner. They’d been eating lunch from McDonald’s.” – Steven Tyler

Both groups got what they wanted. And this went down in history as one of the greatest (albeit unlikely and unexpected) collaborations ever.