Top 10 Most Unique Voices in Rock 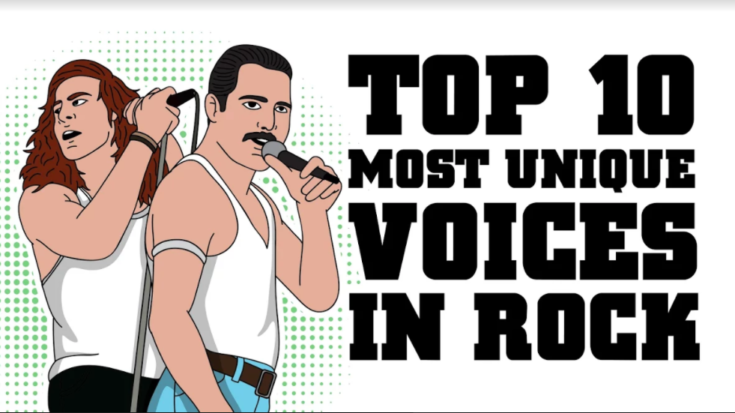 Not Your Average Singers For Sure

Not surprisingly, we can name more than 20 great rock singers but not every single one of them have unique voices – you know, the kind that’s hard and almost impossible to replicate. Also, it’s not just the range (although that plays a huge factor in some instances too), it could be the signature rasp or howl or wail. Either way, they’re way too far from being conventional.

How did we come up with this list? It’s pretty simple, actually. If we can think of someone, ANYONE, who sounds exactly like these singers, then they must not be that unique. We’re not saying they have the greatest voices but their golden pipes are pretty rare.

Warning: They might take your breath away. P.S.: This could feel nostalgic too.

Layne Staley was something else. He was one of the few who can hit the high notes and still manage to look so effortless.

His voice – where do we even begin? He has great range and his vocals are incredibly powerful. And he poured so much emotion into every song – it was him who gave their songs sadness, spookiness and a heartbreaking feel.

“We were just blown away by him – he had ‘star qualities’ even then. He was much more timid – he looked down while he sang. But the grain of his voice was there, the soul was there.” – Musician Johnny Bacolas

His voice is hard to forget and that says a lot considering he had some serious competition in the grunge scene – Eddie Vedder and Chris Cornell. Despite Layne’s vocal power, there was some sort of vulnerability about the way he sings that was hard to even copy. He is greatly missed.

Try closing your eyes and whenever a Steven Tyler song comes on, you can easily tell it’s him. It’s not just his voice, his personality is unique too. That scream, that rasp – no one does it like him. He’s clearly one of the most diverse singers of all time – he can sing power ballads, hard rock and even country and he kills it every time.

“And it’s really important to be new, ahead of yourself. If you’re afraid to take a risk, OK, stay there, baby. But if you take a risk, two things will happen. People will laugh at you. Or you’ll be way ahead of everybody else. And if that’s what you’re in it for, then you gotta take that risk.” – Steven Tyler

What’s more amazing is that his gritty voice still manages to hold up until today – to say that he still has it is an understatement. Many can try to sound like him but no one will ever come close. There’s a reason why he earned his legendary status.

In a world full of talented singers, Janis Joplin remains untouchable. You probably noticed it but whenever another artist covers her songs, fans become enraged. That’s totally understandable because when you know her tracks by heart, you’re well aware that there’s absolutely no way ANYONE can ever sound like her.

That signature passionate rasp is everything.

“She would just kinda sing and scream and cry and she’d sound like an old black woman — which is exactly what she was trying to sound like.” – Melissa Etheridge

Her performances were riveting. It always felt like you could almost touch her voice and soul. Sometimes, when we play some of her songs, there’s no dry eye left in the room. She just has that kind of effect on people. It’s like, once you get a taste of her music, everything else becomes boring.

On stage, she was uninhibited and we loved her for it.

For Thom Yorke, it’s not just about his vocal range. There’s a certain magic about it that’s difficult to explain. His voice could easily put you in a trance. He can go from low to high notes with ease and such emotive voice is pretty hard to find. His delivery is always flawless.

It’s pure and original. And even vocalists from other bands want to sound like him – we don’t know about you but that definitely says a lot about his vocal prowess.

“I tried to sing like Thom Yorke. The Radiohead influence on us was plain to see.” – Coldplay’s Chris Martin

Anyone who hasn’t heard his music is missing out big time. It was his voice which took Radiohead to another level. He sings with his soul and a wide range of emotion. You can’t listen to his songs and not feel emotional. The man’s clearly a musical genius.

Great range, powerful voice filled with so much emotion, and versatile too – Eddie Vedder’s golden pipes deserve plenty of recognition. Not everyone’s a fan of grunge but as long as you have an ear for unique vocals, you’ll agree that Eddie Vedder has one of the most unique voices in rock.

He can go from hard rock to something softer and either way, it would be stellar.

“It’s hard for us to watch early performances, even though that’s when people think we were on fire and young. Playing music for as long as I had been playing music and then getting a shot at making a record and at having an audience and stuff, it’s just like an untamed force…a different kind of energy.” – Eddie Vedder

His growl is just perfect for Pearl Jam’s music and while it’s interesting that several frontmen tried so hard to copy his voice, most of them suck so badly. He is often imitated but never duplicated. His wail is very distinctive you will know it’s him just a few seconds into the song.

Axl Rose is many things but he was not a mediocre, conventional singer. Love him or hate him, he is gifted in the vocal department. Those golden pipes are pretty sick especially when you consider the fact that he didn’t just front one legendary band but TWO!

Okay, he was a temporary vocalist in AC/DC but their songs aren’t the easiest stuffs to sing mind you.

“It’s immediately identifiable, with a combination of brute force and subtlety that is easy to overlook amid the sonic assault of Guns n’ Roses.” – The Rolling Stone magazine on Axl Rose’s voice

You don’t have to be a fan to recognize the uniqueness of his voice. More than his extensive range, you just know when it’s Axl Rose on the mic. His style is so distinctive and even at his age, he can still reach those high notes he could effortlessly belt out to at his prime.

Brad Delp’s vocals suited Boston’s music perfectly. They were a match made in musical heaven. And if you think his voice isn’t that unique, try singing them yourself or listen to other covers. Even professional singers find it challenging to copy him.

He could hit so many levels – from high to low and still sound recognizable. It’s mighty hard to keep up with him – those multilayered harmonies are everything.

“High notes I hadn’t heard before followed by harmonies, and overdubbed exact duplicate layered tracks, all with ease, all with emotion and yet all technically precise.” – Tom Scholz

Boston isn’t everyone’s cup of tea but putting any biases aside, Brad Delp is hands-down unbelievable. Every single note that came out of his mouth was just laced with magic, it leaves you in awe. His vocals exuded power and versatility but at the core of it all, his voice is simply beautiful.

How can we forget the man with spine-chilling, goosebump-inducing voice? He can sing acapella and it will still sound enchanting, stunning and hauntingly beautiful. There are so many attempts to copy his trademark growl but unfortunately, nobody can ever do it like him. Hence, that’s what made him unique.

“His voice has gotten even gruffer with age, and it certainly isn’t for everybody, but that’s part of his appeal. He makes music for an intensely devoted niche audience, never once trying to write a hit.” – The Rolling Stone magazine

Yep, not everyone finds his voice appealing to say the least. It’s something wild and untamed. When we think of ‘unique vocals,’ he’s one of the first rockers who come to mind. Rules didn’t apply to him and obviously, he was far from being conventional. It’s memorable and not something you can forget that easily.

Sure not everyone likes it but at the end of the day, he’s still among the greatest singers in rock.

Speaking of unique and memorable, Robert Plant definitely deserves a spot on this list. At the peak of his career, he blew everyone out of the water. His golden pipes are just that – precious and rare. His vocals are more than just impressive range and power although he remains unmatched in both departments.

“His voice is picturesque. It sounds so new and so old at the same time, with this crazy European mystery to it.” – Alison Krauss

It has that otherworldly feel to it that makes you think Robert Plant is from another dimension entirely. It’s soulful but seductive and he set the bar really high for all other rock singers. He deserves a whole list of his finest musical moments – yes, his voice is divine like that.

We can go on and on about how stellar his voice is but all you have to do is listen to any Led Zeppelin song.

Freddie Mercury was far from your average frontman. Even if you strip away the charisma, stage presence, showmanship and prolific songwriting, he was a man with a unique voice. His range is mind-blowing, even science agrees.

According to a scientific study published last year, Freddie Mercury had a voice like no one else’s. We already knew that but isn’t it nice when a research actually confirms it?

“His technique was astonishing. No problem of tempo, he sang with an incisive sense of rhythm, his vocal placement was very good and he was able to glide effortlessly from a register to another. He also had a great musicality.” – Spanish operatic soprano Montserrat Caballé

Sometimes, we can’t help but think that Freddie Mercury was put on this earth to become the standard by which all others are measured. He could sing every genre – pop, hard rock or opera. You name it, he could perform it.