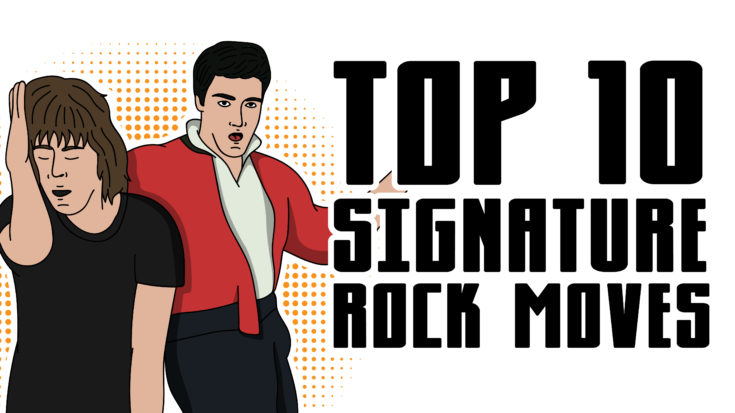 How To Loosen Up Rockstar-Style

While it’s not exactly the moves that made them famous, it’s all part of the package. Why? Well, it’s not enough for rockstars to know how to make their audience FEEL the music, they also need to put on a great show. The list varies from simple signature dances to wild windmills and over-the-top guitar stunts.

Who said entertaining people was easy? In a lot of ways, these became their trademark – for example, who would you associate shoulder rides with? It’s AC/DC’s Angus Young – you know, the time Bon Scott carried him around his shoulders as he shredded like a boss. How about tongue wagging? Yep, that’s Gene Simmons for sure. Obviously, it’s not just the frontmen. Guitarists also like to pull off moves which easily elevates their live performance to another level.

Many tried to imitate them, nothing new to see here, but let’s give credit to those who popularized them. After all, they’re as iconic as the rock acts themselves.

Call it whatever you like – “hip swivel” or “shaking hips.” And while Elvis Presley was many things, he sure made this move particularly popular and so every impersonator wanted to master it and to be fair, some actually did.

Today it may not seem like much but back in the 1950s, it received public outcry because it was way too suggestive at the time. In fact, it was so offensive to some that during his appearance in The Ed Sullivan Show, he was filmed only from the waist up!

America was deeply offended and there were those who compared it to a striptease. Okay, that was a bit too much but then again, keep in mind that it was also during this time when photos of “toilets” were still a taboo. We have no further comment.

Seven years ago, Iggy Pop retired from stage diving. It was about dang time, if you ask us. It’s one of those extremely dangerous moves which could go wrong easily and might potentially land you in the Emergency Room real quick. Take it from Iggy Pop who was basically forced to retire after a nasty fall which resulted in a dislocated shoulder.

He’s not the only who did that but he popularized it. He’s had numerous crazy antics and jaw-dropping moments but nothing quite as iconic as this.

“When I landed it hurt and I made a mental note that Carnegie Hall would be a good place for my last stagedive. The audience were just like, ‘What are you doing?’” – Iggy Pop

He didn’t invent the ‘stage dive’ but the wild child of rock did it perfectly – well, most of the time. Besides, he’s done it so many times and didn’t fall flat on his face so that’s quite a feat to be honest.

David Lee Roth takes two things very seriously – music and martial arts. So obviously when you’re on stage and pumped up, why not do both? Besides, you can tell by his spread-eagle jumps and roundhouse kicks that it really was his thing and not some out-of-the blue, copied-from-the-next-guy kind of move.

“I started my first martial-arts lesson on my 12th birthday up here at the Buddhist temple on Raymond Avenue in Pasadena. To this day, Monday, Wednesday and Friday at 7 in the morning, I train in Brazilian jujitsu … Two nights a week, I have a kendo instructor come here, who’s in his 60s, and I have a kendo hall that I built in my house here.” – David Lee Roth

With Van Halen’s adrenaline-pumping hits, this is the sure-fire way to keep audience on their feet. Also, how many can manage to look so badass doing karate kicks while wearing spandex? You have to hand it to Diamond Dave, no one just does it like him.

With white custom-made Dean guitars covered in sheep’s wool, ZZ Top stepped up their axeslinging game by effortlessly twirling their guitar 360-degrees. It started with their official music video for their 1984 hit single “Legs” and it’s gotten such an amazing reception that they began to incorporate it in their other gigs and live performances.

“One night, I received a 3 a.m. phone call; it’s Gibbons. … At the end of the conversation, he drops the line, ‘I’m sending you some sheepskins I purchased in Scotland, I want you to put them on some guitars.’” – Dean Zelinsky

Does it look easy enough? You bet. But it’s actually way harder than it looks.

Also, should you want to imitate this iconic move, you might encounter two problems – first, you will need hours and hours of practice. In short, you need dedication and a bucket full of patience. Second, if you don’t have a guitar covered in fur, well don’t bother.

Talk about moves like Jagger! You see, part of the reason why he’s considered as one of the greatest frontmen in rock is his stellar showmanship. Even at 74, he still acts like someone with unlimited energy. Blues rock would never be the same without Mick Jagger’s iconic rooster strut.

He’s had numerous influences – from James Brown to Little Richard. But of course, Mick being Mick, he added more flair to his movements because he’s extra like that.

“It’s good, isn’t it? Sure, I was very flattered by it, and it’s nice to see the connections between generations, because I used that in my time, too.” – Mick Jagger on Maroon 5’s “Moves Like Jagger”

Anyone who tried to impersonate Mick makes sure to always do the rooster strut. And unlike Diamond Dave’s karate kick, this one’s pretty easy to imitate. Still, even with so many parodies, this move is the stuff of legends.

Showmanship-wise, The Who always went all-out even if that means their performances end with smashed guitars and exploded drum kits. Moon the Loon never fails to wow the crowd with his wild antics and insane drumming skills but Pete Townshend has proven he can steal the spotlight as well.

He’s not just an excellent axeslinger and prolific songwriter, he pulls off some pretty impressive moves too like the famous windmill when strumming his Les Paul.

“As the curtain opened, Keith Richards is doing this [windmill move]. I was thinking, ‘Wow, that’s so cool!’ I thought it was part of his ‘thing.’ A couple of weeks later, we supported them again in a club in south London. I’m watching carefully, waiting, and he didn’t do it.” – Pete Townshend

He may not be the first to do it but he perfected the move and made it his own. But if you’re thinking of imitating this, be extra careful, because even the great Pete Townshend is left with bloody fingers after doing the windmill.

He may only be standing at a little over five feet but when he picks up his guitar, he becomes this rock giant. And yes while plenty of fans think that Angus Young’s signature move is the ‘duck walk’ which he merely adopted from Chuck Berry, the real one is actually the ‘guitar spasm.’

Honestly, it’s a bit hard to describe. He rips through his solo while lying on the ground and flailing around. It’s one of the wildest and craziest moves we’ve ever seen!

“The hair may go and the teeth may go. But it’s a small sacrifice for the aural excitement.” – Angus Young

It’s interesting to see just how much energy is contained in that little man in a school boy uniform. To think he still gets to shred his solos perfectly, that would leave anyone in awe. It’s clear as day why he’s hailed as one of the greatest rock guitarists.

Gene Simmons’ tongue wagging is so legendary that it sparked some nasty, weird and unfounded rumors about his tongue. The unusual length became the basis of myths that he had a cow’s tongue attached to his own.

So aside from the lack of medical capabilities to accomplish such impossible feat, it’s also not possible for him to wag it around the way he does – you know, nerves and all. If it were an animal’s, how would he be able to control it? Yes, exactly.

“It was OK. But that’s a girl’s version. It’s like girls’ basketball. It’s as good as girls can get at basketball. But you can’t play with the guys.” – Gene Simmons on Miley Cyrus’ tongue wagging

Gene’s tongue is incredibly enormous and we totally get why people believed the ridiculous stories. Then again, maybe he just got extremely lucky in the tongue department. Besides, it’s so popular you can’t think of Gene without the wagging. Just saying.

We feel sorry for those who think Angus Young is the one who invented and popularized the duck walk. Chuck Berry was probably like, “You merely adopted the duck walk. I was born with it, molded by it.” But seriously, that particular move was part of the whole package. He didn’t just pioneer rock ‘n roll but that now-iconic motion too.

As Chuck played his masterpieces, he would hop across the stage in one leg and of course captivate the audience while he’s at it.

“…performing in New York for the first time and some journalist branded it the duck walk.” – Chuck Berry who shared that he came up with the move when he was still a kid because his family found it entertaining

There are people who claim it was T-Bone Walker who first used the duck walk and we don’t know if he really did but the fact remains that it’s one of the things you associate with Chuck Berry – aside from his timeless classics of course.

1. Jimi Hendrix playing the guitar with his teeth

Jimi Hendrix deserves all the praises and recognition he gets. The man was way ahead of his time. He wasn’t just an innovator but he was an artist through and through. And he wasn’t exactly shy about showing off his axeslinging skills.

He played with the guitar behind his back, he also set it on fire and even smashed it on stage but one of the stunts he’s most famous for is shredding with his teeth.

“The idea of doing that came to me…in Tennessee. Down there you have to play with your teeth or else you get shot. There’s a trail of broken teeth all over the stage.” – Jimi Hendrix

One time, he played not just a few notes but an entire solo using his pearly whites. Think about how stunned the audience was! Other guitarists have learned to do this but that doesn’t make Jimi’s signature move any less impressive.