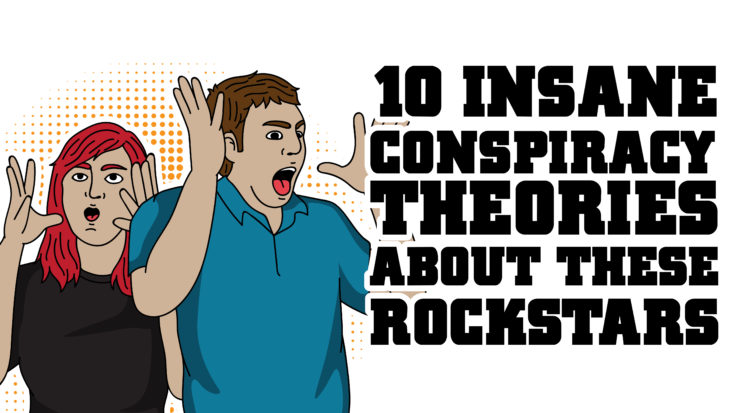 To believe or not to believe?

Rock and roll is no stranger to crazy stories. For decades, there are always far-fetched or actually believable conspiracy theories about our favorite rock icons floating around. The world seems to think there’s something darker out there that makes simple facts not seem what they actually are. From the weird to the downright insane, modern conspiracy theories have invaded the world of mainstream rock and roll. Even before the crazy age of the Internet where anything can be an illusion, conspiracy theories have already been part of the industry. So whether you are a highly suspicious skeptic or a faithful believer of these stories, here are the 10 most insane rock star conspiracy theories that we have yet to debunk.

10. The death of Prince was predicted by The Simpsons

The very popular cartoon, “The Simpsons” has been entertaining the world on TV for almost 3 decades now. As funny as it is, some conspiracy theorists believe that the show has predicted future events including the 9/11 terrorist attack and the Trump presidency. Another shocking event that they “coincidentally predicted” was the death of Prince. The “Purple Rain” singer and icon passed away on April 21, 2016. Eight years earlier, The Simpsons aired an episode featuring lead character Homer Simpson being paid to murder Prince with his own guitar. While Prince was not murdered in real life, rather his cause of death was due to a drug overdose, it’s been theorized that the popular comedy cartoon foreshadowed the star’s untimely passing. Fans and theorists alike question if the show’s writers actually have prophetic powers and could these future-predictive tendency of the show be evidence of deeper conspiracies that involve the entertainment industry.

9. Bob Dylan stole “Blowin’ in the Wind” from a high-school student

Bob Dylan has been surrounded by controversies in his long career. Even his recent win for the Nobel Prize in Literature was laced with much controversy and skepticism. He’s also not new to conspiracy theories. One of the earliest conspiracies of his 60-year long career involves one his first hits “Blown’ in the Wind”, released in 1962.

In 1963, a Newsweek article came out claiming that Dylan had stolen the song from a New Jersey high school student named Lorre Wyatt. According to his high school classmates, Wyatt wrote “Blowing in the Wind” early in September of 1962 and had it performed it in school the following month. There was even a dispute over the date of which Dylan secured the copyright of the song, which was after the singer already recorded it, after hearing it played by the high school student.

Well, this theory has been squashed after Wyatt himself admitted he lied about his entire claim. Nevertheless, the conspiracy stuck for decades even earning its stripes as one popular legend.

8. Paul McCartney died and was replaced by an impostor

The most maniac theory of the 1960s Beatlemania claims that Paul McCartney secretly died in 1966 in a gruesome accident and the other Beatles covered it up by hiring someone named Billy Shears to replace him. Believers of the conspiracy then continue on to believe that the Paul McCartney among us today is not the real Paul McCartney but the look-alike John, Ringo, and George hired after he supposedly died.

The story then claims that the guilt of replacing the real Paul eventually got to the rest of the Beatles which prompted them to begin hiding clues of the truth in their music. Some of the “clues” include the song “Taxman,” in which George Harrison gave his “advice for those who die,” referencing to Paul. Theorists also claim that the entire Sgt. Pepper’s Lonely Hearts Club Band album was the band’s secret message about the truth of Paul’s death. In John Lennon’s “A Day in the Life,” he wrote “He blew his mind out in a car” which is believed to be Paul’s suicide. When played backward, it is claimed that “Paul is dead, miss him, miss him,” is heard on the track. Lennon denied the existence of any backward messages.

This theory that claims John Lennon’s shooter, Mark David Chapman, was programmed by the CIA as a weapon in the elaborate plan to murder the singer, had been circulating for the past 40 years. Skeptics believed that due to Lennon’s public political activism, the C.I.A. had to orchestrate his death. This conspiracy theory was also triggered by what Lennon said in one of his last interviews saying,

“We must always remember to thank the CIA and the Army for LSD…They invented LSD to control people and what they did was give us freedom.”

It’s further claimed that even before this statement, the CIA was already targeting Lennon for promoting peace. The commonly accepted notion though is that Mark David Chapman was simply an obsessed psycho killer. This conspiracy paints him as the CIA’s Manchurian Candidate.

Blink-182 was massive in the ‘90s. Naturally, with the fame they acquired, so did their fortune. The band’s former guitarist and vocalist Tom Delonge’s first splurge as a rock star was buying his own computer to use for one bizarre purpose: to “specifically to go on the Internet and research UFOs.” Delonge himself claims to have encountered aliens and that the government is trying to cover up all signs of their existence. He’s even claimed to experiencing “lost time” when he was just casually looking for aliens near Area 51. He strongly believes that they are tapping his phone too. He’s even created a website on 2011 called “Strange Times” all dedicated to alien conspiracy theories and paranormal sightings.

Kurt Cobain met his tragic and lonely demise when he pulled the trigger to his head in 1994. It was ruled as a suicide, as he also left a note when he took his own life. However, many of Cobain’s loyal fans and conspiracy theorists still believe that Cobain’s death was actually orchestrated by his controversial and troubled wife, Courtney Love. While the story doesn’t claim that Courtney actually pulled the trigger on his husband (although some people think she did, but that’s a different conspiracy), it is said that she had hired someone to do the dirty deed for her.

In 1996, Eldon “El Duce” Hoke, singer of Seattle band The Mentors, claimed that Love approached him to kill Cobain for $50,000. He refused Love but said he had passed the job offer to another friend. The conspiracy lives to this day, with Courtney Love issuing a cease and desist letter to theaters about to show the 2015 film “Soaked in Bleach” which centers on private investigator Tom Grant, hired by Love to find Cobain after he escaped from rehab before his death.

4. Jim Morrison Faked His Own Death

In July 3, 1971, Doors frontman Jim Morrison was found dead in a bathtub at the Paris apartment he shared with his girlfriend, Pamela Courson. He was only 27 years old, inevitably claiming his spot on the 27 Club list. Morrison has been dead for more than 40 years, but conspiracy theories call his sudden death a hoax. Morrison admired the poet Arthur Rimbaud, who faked his own death and fled to Africa, and many people think this poet inspired Morrison to do the same to flee the spotlight. The story goes to claim that Morrison became overweight and was in a rut, musically and creatively. He then went to Paris with his girlfriend to recharge before going going out to the public again. But instead of re-emerging with a fresher outlook on things, he was found dead due to heart failure. Fans question the lack of an autopsy and why only three people came to see Morrison’s body after he died. People also claim to have sightings of Morrison all over the world even after his death.

3. Andrew W.K. and Dave Grohl Are the Same Person

Another take on this whole conspiracy claims that Andrew W.K.  was someone named “Steev Mike” who isn’t the real Andrew W.K. The story goes on to suggest that Andrew either was used to be called Steev Mike or he never was and that Steev Mike is someone else entirely. These switcheroo conspiracies are definitely confusing.

The infamous 27 Club is already a conspiracy theory itself. There is an inception of conspiracies as 4 members of the 27 Club namely Kurt Cobain, Jimi Hendrix, Janis Joplin, and Jim Morrison were all reported to have died with white BIC lighters found inside their pockets. This theory actually has a name and it’s called the “White Lighter Myth”. The urban legend claiming that these famous rock icons died while in possession of a white lighter has got people associating the white lighter with bad fortune resulting in death. This theory has been debunked recently, discrediting the myth by noting that the company BIC did not produce and release lighters until 1973, which was years after Hendrix, Joplin, and Morrison have already passed away. For Kurt Cobain’s case, it was also noted that neither of the two lighters found near his body were white. The lighters weren’t in his pockets either so there is nothing to fear with owning a BIC white lighter. This perhaps has got to be the most famous conspiracy theory in the music industry: Elvis Presley is still alive.

As ridiculous as it is, there are countless sightings of Elvis through the decades, all across the world, claiming that he did not really die of heart failure in Memphis, Tennessee in 1977. The people who still believe that Elvis is still among the living are called the “Alivers”. For decades, they have compiled evidences that prove Elvis must’ve faked his own death and is still alive and hiding in plain sight.

The 50-year seal on his autopsy results is a big driver of this “Alivers” club. Also the misspelling of his middle name engraved on his tombstone, which reads “Aaron” instead of the real spelling “Aron”. But nothing can top the alleged “sightings” of Elvis living an ordinary life away from the spotlight. The most popular Elvis-is-alive “sightings” include him eating at a Burger King in Kalamazoo, and sweeping the floor at a bar in Stockholm. So it would seem, Elvis has not left the building…yet.