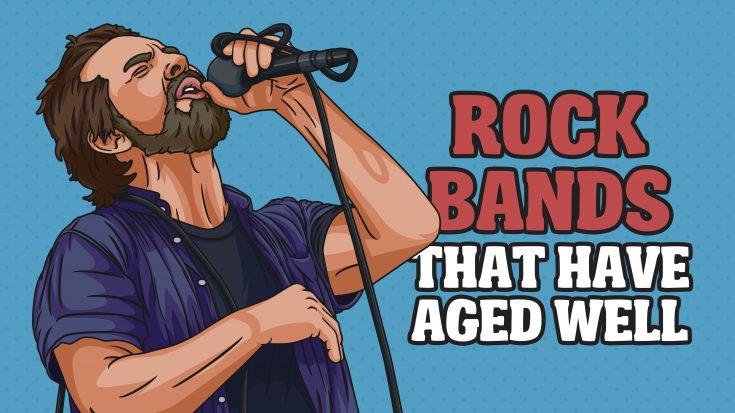 Rock lives on and on.

Rock and Roll has enjoyed a long and rich history. From the likes of Chuck Berry, The Beatles to The Rolling Stones and AC/DC, these bands have shaped the genre meaningfully. Rock and Roll has also given birth to the most exciting live acts this past century has ever seen. Some bands can be categorized as one-hit wonders while others have achieved longevity despite the music industry’s unpredictability. It’s a gigantic feat, getting better as they age. These 10 bands  have endured over the span of a long career, even despite minor line-up changes. These bands have successfully overcome internal conflicts, creativity issues, and management concerns. To be part of this list, the bands should have released music within the past 5 years. Past break ups do not eliminate a band from the list.

First up is the groovy, hip, and most probably the funkiest rock band of the 90s- The Red Hot Chilli Peppers. As early as 1992, this high-energetic quartet has captivated audiences with their enthusiastic live performances and fresh rap-funk tunes. Their almost overnight road to stardom took its toll on John Frusciante, the band’s creative lead guitar player and back-up vocalist. Frusciante did not like the success and fame that the band was enjoying, and parted ways with the rest of the band after unresolved internal personal issues. He came back again after several years, and the Peppers continued to create new and creative songs seen in the “Californication” album. They also won five Grammy awards for their 2006 album Stadium Arcadium. Their latest album The Getaway was released in the summer of 2016 and has sold over 1.3 million copies world wide.

Metallica is arguably the world’s most popular metal band. The band’s career grew steadily in the early 80’s, and has established their marck in the hard rock and metal music scene ever since. Metallica helped place the genre on the map, and their most notable songs “Master of Puppets” and “Enter Sandman” have influenced many younger international acts. The band is known for their upbeat tempos, instrumentals, and inventive musicianship. They have been declared as one of the “Big Four” bands of Trash Metal along with Megadeth, Anthrax, and Slayer. Although their recent musical efforts have received somewhat negative feedback, fans are still optimistic that Hetfield and the gang will create something new and exciting that metal heads can look forward to. Their latest album, Hardwired… to Self-Destruct was released in 2016 and certified platinum in the United States.

Rush is a Canadian-based rock band made up of Geddy Lee, Alex Lifeson, and Neil Peart. The band draws their themes from interesting subject matters such as science fiction, philosophy, and fantasy. The band is also known for their intricate compositions and diverse lyrical content. Fortune has been good to them, as they have consistently made their mark throughout the 70’s and 80’s.  Even after over 35 years later, they are still much-beloved due to their signature style and memorable live performances. After enjoying 7 Grammy nominations and several Juno awards, the band was inducted into the Canadian Music Hall of Fame in 1994. Their most successful album, 2112, was released in 1976 and has established them as a mainstay in the Progressive Rock, Hard Rock, and Heavy Metal scene. They released their latest album Clockwork Angels in 2012, debuting in the number 1 spot in the Canadian charts.

Despite famed lead guitarist Ritchie Sambora leaving Bon Jovi indefinitely, the band continues to live and thrive on. Bon Jovi has effectively produced their biggest singles in the 80’s with popular songs such as “Livin’ on a Prayer”, “You Give Love a Bad Name”, and “I’ll Be There For You.” With the help of Jon Bon Jovi’s signature high voice and electrifying performance, the band has reached new heights in the 80’s and still continues to perform in big concerts and stadiums. The band released 13 studio albums, 6 compilations, and 3 live albums, citing the likes of The Rolling Stones, Aerosmith, Van Halen, and The Beatles as some of their influences. They released their latest album This House Is Not For Sale in December 2016.

In 1969, ZZ Top was founded in Houston Texas by Gibbons, organist Lanier Greig, and drummer Dan Mitchell. With music ranging from Blues Rock, Boogie Rock to Hard Rock, ZZ Top released its first album in 1971, and from thereon, has garnered awards and recognition in the international music industry. Fans love the band’s humorous lyrics and original style, and their music is characterized by guitar-driven sounds and melodies. Unsurprisingly, they were inducted into the Rock and Roll Hall of Fame in 2004. With almost five decades together, the group’s musical output just keeps getting better and better. In 2012, they  released their fifteenth studio album La Futura, which clenched the number 6 spot on the Billboard 200.

Alongside the super-bands Soundgarden, Nirvana, and Alice in Chains, Pearl Jam has made a name for itself during the heyday of Grunge in the 1990s. Made up of Eddie Vedder, Michael McCready, Stone Gossard, Jeff Ament, and Matt Cameron, Pearl Jam was declared a group of “angry young rockers” who “gave a voice to the passions and fears of a generation.” The band has remarkably worked with members of Soundgarden to create Temple of the Dog, a band whose aim is to create a tribute album for one of their Seattle comrades. Eddie Vedder’s powerful vocals and distinct guitar riffs define the sound of Pearl Jam, and the band is hailed as the big icons of Grunge Rock up until this day, with their latest album Lightning Bolt released in 2013.

Melancholy, cathartic, paranoid, angst-ridden, reflective: these are only some of the words that describe the English-based band Radiohead, going strong 30 years on. Declaring themselves as both classic and contemporary, Radiohead is labelled as a “touchstone for everything that is fearless and adventurous in rock.” Since their inception in 1985, they have recorded 10 albums and have won 3 Grammy awards. Their success lies in their ability to create simple yet deep lyrics that explore the human condition. Their most beloved song “Creep”, a song about identity loss and unrequited love, is still very popular today, and has been featured as a movie soundtrack in a number of international features. Though their sound is continually evolving, their performances and new material continue to stay relevant and memorable. In May 2016, Radiohead released their ninth studio album A Moon Shaped Pool.

Thanks to the perfect combination of passionate morality and musical experimentalism, U2 became one of the world’s largest rock and roll bands of all time. This Irish-born group has never shied away from controversial topics such as religion and politics, creating songs such as “Sunday Bloody Sunday” and “I Still Haven’t Found What I’m Looking For.” The Edge’s distinct, reverb-driven guitar playing and Bono’s crowd-pleasing live performances are a treat for critics and fans alike. The band’s sound can be attributed to its post-punk roots, and a lot of their songs reflect a hopeful optimism amidst life’s unanswered questions. Bono and the gang are still making waves in the rock scene. Through their ageless tunes, they continue to stand up for what they believe in. In 2014, they digitally released their thirteenth studio album Songs of Innocence as an unprompted automatic download to iTunes, which triggered a backlash from almost 81 million iTunes users. U2 issued a public apology regarding the automatic iTunes album download. Still, the album received a Grammy nomination for Best Rock Album in 2015.

In 1973, brothers Malcolm and Angus Young formed AC DC, a Hard Rock/Blues band hailing from Australia. During the band’s long and eventful career, it has sold more than 200 million records worldwide, cementing their position as one of best-selling music artists of all time.  In 2014, ACDC released their fifteenth studio album Rock or Bust, selling over 3 million copies world wide. In 2016,  the band still continued to tour but their recent line-up change has forced the band to recruit Guns N Roses frontman Axel Rose for the remaining concert dates. Despite these changes, these mates from Down Under never fail to bring the rock and roll to every live performance.

The Rolling Stones, a legendary icon of the rock world. A band that has a career spanning a whopping 55 years, they were one of the groups that lead the British Invasion during the 1960’s. Their “youthful and rebellious counterculture” appealed to the generation of that time. Their album “Some Girls”, released in 1978, was one of the band’s most commercially successful albums. It was said that bands like the Rolling Stones “enhanced the interest of American youth for blues musicians.”  After more than 50 years of being active in the music scene, the Stones still have the creative juice to come up with the edgiest guitar riffs ever played. In December of 2016, The Rolling Stones released their 25th studio album, Blue and Lonesome. The album was certified platinum in the U.K.