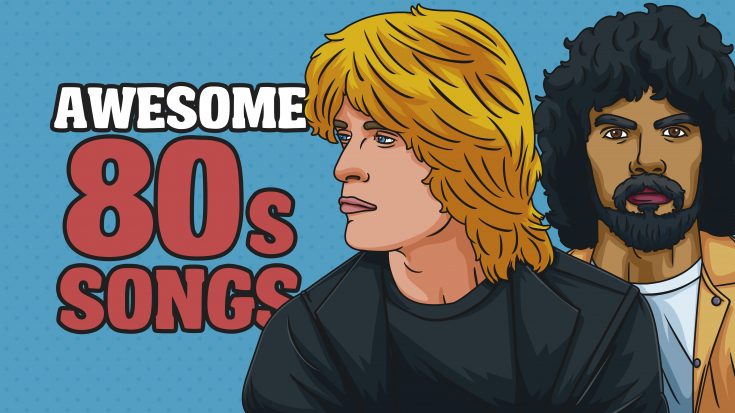 All awesome music is not lost

The 80s was not just an era of big hair and bright fashion but it was also the golden era of great over-the-top eclectic synthesized pop music as well as the good ol’ rock and roll. In fact, some of the best classic hit were made in the 80s decade. There were a lot of singles from the 80s that we will know and love forever but there are some great tunes that were also popular then but somehow found its way to obscurity as the years went by. These songs, despite their awesomeness, have long been forgotten.  On this list, it’s time to refresh our memories, dust the cobwebs, and give these forgotten 80s gems some recognition.

American duo Daryl Hall and John Oates were popularly known for their very decade-appropriate sense of fashion as much is they were for their music. They have more known hits such as “I Can’t Go for That”, “Maneater” and “Dance On Your Knees” that we will always remember but they have this awesome dance-rock gem that was somehow lost in obscurity forever. “Out of Touch” is Hall & Oates’ single off their twelfth studio album Big Bam Boom, released in 1984. The song was released as the lead single from the album and even topped the Billboard Hot 100 chart for a total of two weeks. It was also the last number one single for the duo from their fourteenth consecutive top 40 hits.

People may also have forgotten that this song was segued from the opening song of Big Bam Boom, “Dance on Your Knees” and how the music video for it really was hard to forget, supposedly. Two guys hitting a Brobdingnagian drum kit with humungous drum sticks? It’s only fitting that we remember how awesome this 80s hit was!

Remember Danny Elfman? He’s most famous now for being BFFs with Tim Burton, producing chilling scores for the film maker’s dark movies. He is also the one who holds annual “Nightmare Before Christmas” concerts.  But before all that, he was actually the front man of the 80s band “Oingo Boingo” who had a hit in 1985 called “Dead Man’s Party”. Yup, there’s a reason why he and Burton partnered up. This song tells the story about attending a funeral and being buried, an homage to the Mexican festival Día de los Muertos, or Day of the Dead. From the song, came the band’s most recognized symbols, dancing skeletons. The track is an oxymoron in itself because the dark lyrics sort of contradicts its upbeat ska vibe. Oingo Boingo even played the song live in the film “Back to School”, that’s why it may have been vaguely familiar.

These Scotts have made it big in the US with their Celtic rock style and unique emotive bagpipe sound. “In a Big Country” by Big Country made us feel all sorts of country-side feelings, vehemently sending a positive message to stay alive and always look for silver linings. The plaid-clad band took this single up to number 17 on the Billboard Hot 100 in 1983. Though the song itself didn’t get as much radio play in the States, it was the music video that was played on MTV to no end. The video featured the lush mountainside of the European country-side through a series of outdoors-y activities done by the band in order to woo a mountaineer-goth femme fatale character. The infectious Celtic-rock prance of the single gave off a happy optimistic vibe that was energy-filled and much to avid 80s music fans, danceable as well.

“The Perfect Kiss” is memorable because of its weird complex arrangement that included sounds that could only be really heard in a farm such as frog croaks and synthesized sheep sounds, even a cowbell at the end. Another mind-boggling thing about this song is the ambiguous title and it having no direct relation to the lyrics. Even lead singer Bernard Sumner doesn’t know what meaning of the title or lyrics is saying, “I haven’t a clue what this is about.”

The track, originally released in 1985 and originally running at 8 minutes and 46 seconds, was a fan favorite but was not played live until from 1993 to 2006 due to the difficulty to convert the animal sound effects in a live performance. That may also be the very reason why this weird wonderful synth-pop-rock song was forgotten.

Dubbed as what may be one of the greatest lost one-hit wonders of the 80s, “Captain of Her Heart” is a melodic masterpiece by Swiss duo Double (pronounced “doo-blay”) consisting of Kurt Maloo and Felix Haug from their album Blue. The song hit international success, reaching number 16 on the Billboard Hot 100 charts in 1985. “Captain of Her Heart” also made Double the first Swiss act to make it to the Billboard Top 40. The song tugs at listeners’ emotions, telling the story about a girl who has given up waiting for her lover to come back. The ballad also featured a smooth sax part played by Swedish saxophonist Christian Ostermeier. Sadly, just two years after this hit, Double broke up in 1987, with Maloo moving on to pursue a solo career.

This 80s post-punk rock pop song is about the destruction of the ancient city of Pompeii destroyed by the eruption of the volcano Mount Vesuvius in 79 AD Italy. It was the eruption that buried everyone alive in the lost city. British rock band Siouxsie and the Banshees released a song about it called “Cities in Dust”, the first single released from their seventh studio album, Tinderbox. The lyrics involve a graphic description of the volcano, the tragic state of the victims in Pompeii, and even the discovery and excavation of the lost city.  The image of lead singer Siouxsie Soux is goth, and the lyrics are dark and tragic despite the pop music melody but “Cities in Dust” it’s actually one of Siouxsie and the Banshees’ most recognized songs, with its smart catchy tune and interesting music video. It hit the U.S. Hot Dance Club Play chart at number 17 and was a hit in the dance clubs in the 80s.

The Brit-American rock band Foreigner is probably more known for their iconic classics “Waiting for a Girl Like You” or “I Want to Know What Love Is” but the public probably forgot that the most successful single from their 4 album was “Urgent”. Released in 1981, it reached number 4 on the Billboard Hot 100 Chart and even hit the number 1 spot on the Billboard Rock chart, and it stayed there for a whole month. “Urgent” was released before “I Want to Know What Love Is” which eventually drowned out the love and hype for the former, and may have been the reason why this awesome single was put aside. Nevertheless, both songs hail from the album 4, which became one of the best selling rock albums of the ‘80s, having sold over six million copies in the U.S. alone.

This powerful ballad was in a league of its own, with the unique synth-blues style written in the tempo of a Viennese waltz, completing the track with dramatic instrumental breaks and an emotionally chilling saxophone solo. INXS’ 1988 single “Never Tear Us Apart” was already awesome when it was released but had been forgotten about through the years. It wasn’t until the band’s lead singer and writer of the song Michael Hutchence’s funeral in 1997 that the song resurfaced when it was played as a tribute to him. It surprisingly charted again just recently in 2014 when the INXS documentary that had the same title, “Never Tear Us Apart”, was released.