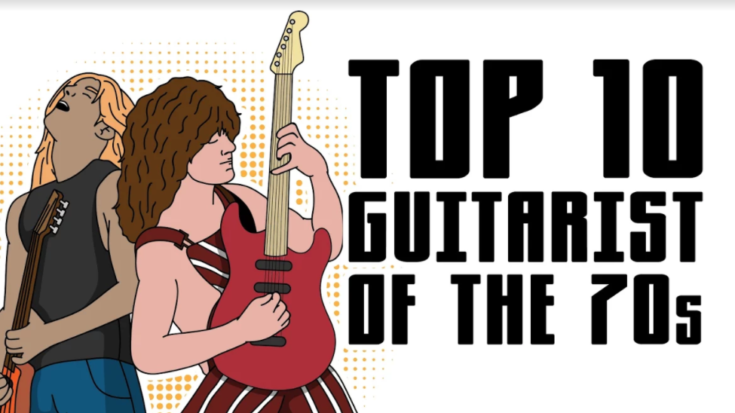 The Best Axeslingers Of The Decade

Ah, here we go again – we are about to start another round of endless debate among readers. You see, the ’70s was far from being perfect. The decade started with the much-talked about breakup of The Beatles. Disco may have partly dominated the airwaves but that didn’t necessarily mean rock music was moved to the back seat. On the contrary, the ’70s marked one of the greatest times in rock ‘n roll and yes, even if other genres began their rise to popularity.

It was a golden era, for sure, especially for punk-rock and progressive-rock. But the music wouldn’t be as memorable if it weren’t for these stellar axemen who delivered jaw-dropping and face-melting performances, helped fill stadiums and arenas, and played unforgettable solos and riffs.

For the record, it’s not easy handpicking only 10 guitarists when the ’70s had so much to offer. So we chose only the crème de la crème and yes, it was difficult to bump out some of our favorites.

Eddie Van Halen is serving you some real shredding goodness. Say what you want about him but at the height of his career, he blew everyone away – from the speed to the style, he was clearly not a run-off-the-mill guitarist. He didn’t single-handedly change the course of rock music but he was highly influential, you can still hear traces of his influence in today’s musicians.

He knew how to step up his game. Besides, you know you’re doing something right when your peers start singing your praises.

“He was single-handedly moving guitar to a whole new level… What was amazing about Eddie’s playing was that it was full of stuff I’d heard before, yet it all sounded so new.” – Joe Perry

There’s a raw energy in his playing that cannot be duplicated. He didn’t get his legendary status for nothing – his sound is distinctive and unique. Many have tried to copy but failed. And that’s why Eddie Van Halen will go down in history as one of the greatest axeslingers of all time.

We can’t help but wonder why Alex Lifeson didn’t really get the recognition he so richly deserved.

He’s daring and a certified virtuoso. His skills on the guitar are not only legendary, they’re basically unrivaled. His riffs are far from easy and even professional guitarists break a sweat while playing them. And even if they’re complicated, he still somehow manages to make them groovy.

If you can’t appreciate his greatness, you’re listening to his solos wrong.

“My brother-in-law played flamenco guitar. He lent his guitar to me and I grew to like it. When you’re a kid, you don’t want to play an accordion because it would be too boring. But your parents might want you to play one, especially if you’re from a Yugoslavian family like me.” – Alex Lifeson on how his inspiration in guitar playing

He is musically gifted and that shows in his range. He can play like others but others cannot even play half as good as him. Listen closely and you’ll understand what we mean.

In the guitar world, Gary Moore’s untouchable. And since we’re talking ‘underrated’ here, look no further than Moore who was left out of the 100 Greatest Guitarists of All Time list by The Rolling Stone magazine. Most of those who made it couldn’t even hold a candle to Moore.

The guy could play almost every single genre there is. From his impressive range and amazing tone to his perfect phrasing – he’s one of the few who can actually make you feel things.

“He was playing a Strat, which is known for a clear, somewhat thin sound. But the sound he was getting out of that Strat was so thick and so full and just so raw.” – Kirk Hammett

He’s versatile and technically talented. It’s like every note he plays is peppered with magic. There’s not much fluff or theatrics with him. But when you’re Gary Moore, who needs any of those?

Unless you have a heart made of stone, Duane Allman’s solo in “Hey Jude” ought to hit you right in the feels. We know that was way back in 1968 but Duane Allman along with the rest of the guys in The Allman Brothers Band became one of the most influential rock bands in the ‘70s and it wouldn’t have happened without Duane and his incredible axeslinging skills.

Before his untimely death in late 1971, he has proven his immense talent and more. Besides, if you blew away Eric Clapton himself, then you probably have something no one else has.

He took everything to another level and it’s safe to assume, a talented man like him comes once in a blue moon. Still not convinced? Listen back to “Layla” (yes, THAT masterpiece) and Live At Fillmore East. “Good” doesn’t even begin to describe him.

There are so many things to love about David Gilmour. He is one of the more popular ones, sure, but that still doesn’t take away the fact that he is clearly among the best. Listening to him play an extended solo is like a drug – highly addicting, takes you to places, and you keep wanting more.

His work leaves an impression on the listener and you are never the same way again. Besides, to leave him out of this list is simply unforgivable.

“I wanted a bright, powerful lead guitar tone that would basically rip your face off.” – David Gilmour

He pours so much soul into every note. We often find ourselves getting major goosebumps during his solos. How can this man sound so otherworldly? It’s like he comes from another realm. You see, some people play music. David Gilmour lives and breathes it. And his work is nothing short of stellar.

This man needs no introduction. He’s a guitar extraordinaire for more than five decades now and for someone to remain relevant that long and with so many classic hits to boot, then he definitely has something right as a musician.

You can ask his peers or other rock legends and the consensus is that he is undoubtedly one of the finest guitarists of the ‘70s. His melodic pieces are unforgettable and not something you could easily get out of your head.

“I almost subconsciously used music for myself as a healing agent, and lo and behold, it worked… I have got a great deal of happiness and a great deal of healing from music.” – Eric Clapton

It’s not just “Tears in Heaven” but for most of his songs, you can feel the sadness and depth of emotion. Let’s be honest here, not everyone can do that even those who are technically proficient. Eric Clapton deserves his legendary status and more.

He’s an underrated guitarist who deserves way more credit than what he actually got. He’s clearly one of the best and a real master when it comes to guitar playing. That impressive range of style – who would have thought this guy has never received any formal training? And yet he can easily leave everyone else in the dust.

We can’t even pick his finest moment because there are just too many.

“No one was playing archtop, hollowbody guitars in a rock band. People laughed at me and thought I was really snooty. To me, it was an object of art, it wasn’t just a guitar.” – Steve Howe

He could outplay most guitarists you know. In fact, he’s a league of his own and while he may not be as popular as others, he makes up for it with talent and skills. You cannot dare call yourself a rock fan if you haven’t listened to any of his solos.

Ritchie Blackmore’s style is more like a punch in the face. He doesn’t do anything half-baked so it’s almost always powerful, edgy and aggressive. His riffs are monstrous and overall, he’s a versatile guitarist. He was way ahead of his time.

He had a reputation for being moody and highly unpredictable and that translated to how he delivered his solos. Comparing him to other axeslingers, Blackmore went hard and heavy but it was always clean.

“I never work out my leads. Everything I do is usually totally spontaneous. If someone says, “That was good; play that again,” I’m not able to do it.” – Ritchie Blackmore

He’s comfortable playing every genre imaginable. And the thing is, no one can sound like Ritchie Blackmore but himself. Many tried but they all failed. The sound and tone, you can quickly tell it’s him. He should never be compared to other axeslingers – he is peerless.

The next time you feel sad, remember that you lived in the same era as Jimmy Page the Guitar God. He knows the perfect timing. Some people play the guitar, others become one with it – and obviously Page is the latter.

Watching him do his thing on stage is breathtaking. He knows how to keep the audience on the edge of their seats – the versatility and range of styles, he’s a real showstopper. He builds excitement and he works hard to create classic hits.

“When I grew up there weren’t many other guitarists … There was one other guitarist in my school who actually showed me the first chords that I learned and I went on from there. I was bored so I taught myself the guitar from listening to records. So obviously it was a very personal thing.” – Jimmy Page

From melodic to gargantuan riffs – he’s the real deal. And anyone who has heard him play became inspired to grab a guitar and start learning.

Some people think he’s overrated, we beg to disagree. Why? Okay, here’s one question – did he or did he not deserve the recognition and credit he got? If you said YES then there’s no doubt he deserves the top spot on this list.

He does enjoy some showmanship on stage but even if you take all of that and just focus on his playing, it’s still hard to deny how much of a virtuoso he was. He shined as an axeslinger and somehow he makes everything look easy and effortless.

“He played just about every style you could think of, and not in a flashy way. I mean he did a few of his tricks, like playing with his teeth and behind his back, but it wasn’t in an upstaging sense at all, and that was it … He walked off, and my life was never the same again.” – Eric Clapton

He was innovative and a revolutionary. He inspired numerous musicians – some became legends themselves. He was a musical genius and while we lost him early on in the decade, he still contributed much to the era.