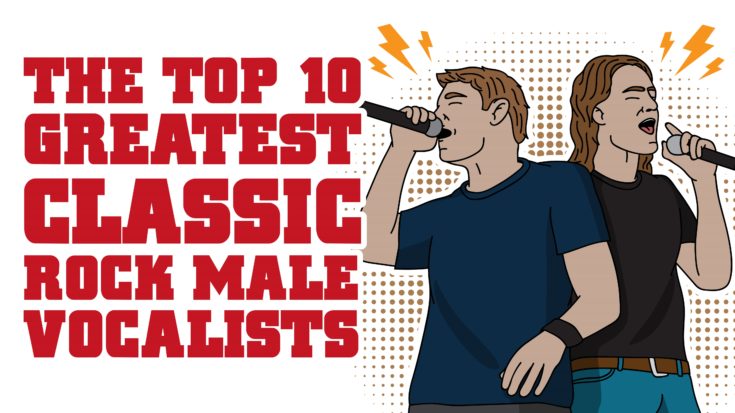 Rock ‘n roll isn’t all lightning-fast guitar work, powerful drumming or melodic bass lines. If anything, it’s one of those genres that really highlight someone’s vocal range and skills. To be fair, it was so hard coming up with this list. Sometimes, 10 just isn’t enough:

Don Henley sang the lead vocals to some of The Eagles classics like ‘Desperado’, ‘Best of my Love’, ‘Hotel California’ and ‘The Long Run.’ And even after the band broke up, he pursued a solo career and achieved commercial success. In fact, the Rolling Stone magazine ranked him at no. 87 on their list of Greatest Singers of All Time. With his distinctive rough and flinty vocals (which he got from singing rhythm and blues songs in their college jam sessions), he’s often regarded as one of the best singer-drummers of all time. His raspy tenor voice is easily identifiable and do check out this live performance – it’s a masterpiece to say the least and only proves that his musicality is off-the-charts. It’s flawless and intense – an absolute perfection. Although to be fair, Don Henley could sing the yellow pages and still sound astonishingly beautiful. Yep, he’s talented like that.

His baritone voice is raw, strong, and powerful. Even after years of singing and performing, his vocals remain rich and deep. He wields unparalleled vocal strength and The Who’s hit songs (‘My Generation’, ‘Pinball Wizard’, and ‘I Can See For Miles’ to name a few) prove as testament to that. He can manage to hit exceptionally low notes and his singing always packs a lot of emotions. Flaming Lips’ Wayne Coyne accurately described Roger Daltrey’s vocal range when he said, “You don’t realize how great a singer Roger Daltrey is until you try to do it yourself.” Well, we couldn’t agree more. On the surface, it looks effortless but dang, you just can’t help but be blown away. He’s no slouch on vocals and while his earlier works with The Who had a youthful vibe to it, his voice simply took on a more dramatic edge as he aged. Teach us your ways, master!

Whenever we write about David Bowie, we often find ourselves at a loss for words. Where do we even begin? The man was a master of so many things. He’s one of the greatest singers of all time and yet somehow, that isn’t enough to describe his musicality. He’s an artist through and through and a chameleon when it came to his vocals – he can go for a light tenor or a dramatic, powdery baritone style. Either way, his voice is on a different level. Case in point: ‘Space Oddity’ and ‘Life on Mars?’ Carlos Alomar, who has collaborated with him, said that “The dude can wail.” When we think of David Bowie classics, we associate it with one word: theatrical. He was always about going over-the-top and it ALWAYS sounds so good even on various ranges. His songs aren’t easy to sing – it’s far complex for anyone to just cover it. And that’s why his work is a masterpiece.

His musical influences include blues artists and rock ‘n roll musicians like The Beatles and The Drifters. In fact, he decided to pursue a career in music after seeing The Fab Four on The Ed Sullivan Show. He said, “That one performance changed my life … Up to that moment I’d never considered playing rock as a career.” What’s more amazing is, even after all these years, he still sounds the same. The rich, full voice is mind-blowing. His live performances are tight and always full of energy. But did you know he didn’t like his voice before? When he sat down with Howard Stern, he shared: “I like [my voice] better now than I used to. I don’t think of myself as a singer”. If you’re not convinced he’s one of the greatest vocalists in classic rock, then all you need to do is watch his concerts and I guarantee, you’ll be an instant fan.

Michael Hutchence’s baritone voice was often described as ‘sexy.’ He was a frontman of one of Australia’s biggest rock acts and his swooning singing style is one for the books. Some say he had better range than The Doors’ Jim Morrison and you can actually trace a tinge of Morrison in some of his songs. Nevertheless, it’s undeniable that Hutchence’s rippling vocals was extremely powerful. When it comes to technique, he’s probably one of the most underrated vocalists. His passionate singing style had a lot of firepower and when he sings, it’s like he’s taking you on an emotional ride. On top of that, the man was extremely charismatic. He was a creative spirit and although he wasn’t always belting out high notes, he had a distinctive voice which you can identify with a few notes. His live performance with his band INXS at the Wembley Stadium in 1991 was perhaps their pinnacle moment. It was unbelievable.

He is often called “The Voice” and that moniker couldn’t be more accurate. His power, incredible range and tone are too flawless to be real. It’s like he’s not from this world. Add in a beautiful vibrato and deep soul and you get one of the greatest singers to ever walk the Earth. From stellar high notes to soulful lower range, he has always managed to exceed expectations. The complexity of ‘Mother, Father’ is the solid proof of how only he can make challenging songs look effortless to sing. That certainly makes him an amazing vocalist and frontman – and his fabulous hair counts too. Many experts have tried analyzing what makes his voice special but there’s no need to get technical here. Just listen to their power ballads and you can’t deny how good he sounds. It gives you chills and goosebumps. And for sure, it will affect you on a spiritual level.

A study conducted two years ago found out that Axl Rose has greater vocal range than Mariah Carey (who sings along to the pitch of the musical instruments when introducing her band). He never ceases to amaze me. From the deep bass baritone to his exceptional higher range, Axl’s raspy vocals will make you think he’s not human. He’s almost unreal. And his temporary stint as this year’s AC/DC frontman only proves his versatility. It’s when he sings classics from both AC/DC and Guns ‘n Roses that you realize flexible and talented he is. He hits high notes like it’s nothing! And considering he’s past his prime but can still deliver and perform difficult songs live, you’ll understand why he’s rock royalty. Of course another factor would be his massive stage persona. Besides, Sebastian Bach even commented, “Axl sings the most beautiful melodies with the most aggressive tones and the most outrageous, freakish range.”

Two words to describe Brad Delp’s tenor would be ‘flawless’ and ‘effortless.’ The detailed vocal harmonies are too beautiful to describe. Although he’s a multi-instrumentalist, what really makes him popular is his impressive range and soaring vocals which is why he earned the title ‘Golden Voice.’ Quite fitting, don’t you agree? And if that isn’t enough, he has this uncanny ability to sustain the high notes. It’s like his superpower. He’s got that perfect pitch and he can even imitate Paul McCartney’s tone and style. One of the things that we find mind-blowing is how he can blend with the guitar’s high note flawlessly. That level of precision and clarity is what sets him apart from other vocalists. For instance in ‘More Than A Feeling,’ you’d find live performances where he sings higher than the studio version. It’s a one-of-a-kind talent, a remarkable voice from an musically gifted man. Hats off!

Robert Plant’s voice is all about power. His wide vocal range is evident in the high-pitched notes in various Led Zeppelin classics. You can spend years and years of practicing and still not reach his level. His screams aren’t just there for the heck of it. But they suit the beat and rhythm of the songs perfectly. It’s outrageous. He’s like a gold standard in singing any genre of music – folk, hard rock, upbeat pop, soft rock and anything in between. His live performances are on a different level – you can hear his soul coming out from him and that’s perhaps why he’s one unforgettable vocalist. He doesn’t just hit the high notes flawlessly but he pours his emotions into them. It was Alison Krauss who described his vocals accurately, “His voice is picturesque. It sounds so new and so old at the same time, with this crazy European mystery to it.”

The god among rock vocalists, Freddie Mercury is a league of his own. Even science agrees that he has one of the best singing voices of all time. Belting out iconic musical pieces like “Bohemian Rhapsody” and “We Are The Champions”, his voice is somewhere between tenor and baritone. Using archive recordings and a singer who can imitate (hard as it may be) Freddie’s voice, the researchers found out that he had ‘exceptional control over his voice production technique.’ His operatic singing can’t be beat. Even when he was dying, he gave it his all. In fact, Brian May recalled when they were recording ‘The Show Must Go On’: “I said, ‘Fred, I don’t know if this is going to be possible to sing.’ And he went, ‘I’ll fucking do it, darling’ — vodka down — and went in and killed it, completely lacerated that vocal.” This man was pure magic. No one can come close to this musical genius.