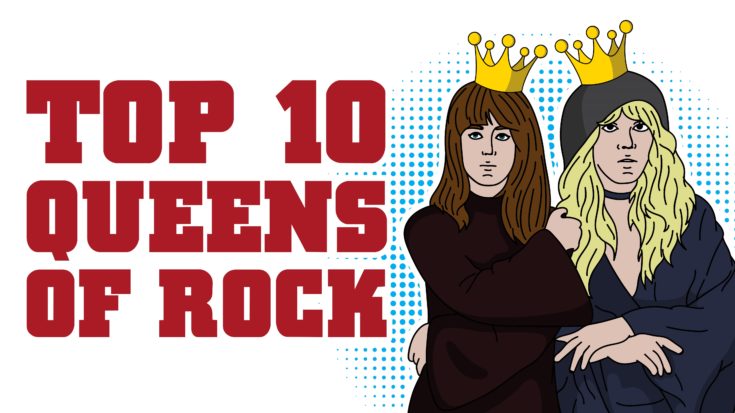 Make way for the queens who proved that rock ‘n roll isn’t a boys-only domain. More than having powerful voices and boundless musicality, these ladies have the attitude and style that influenced future generations of musicians.

Being core members of Canadian rock band Heart, their music’s main influence was rooted in heavy metal, folk and hard rock. It’s been more than 40 years since they released songs that propelled them into international stardom – Ann with her commanding voice and Nancy’s rhythmic guitar playing. They’ve suffered through a lot of sexist comments and even had to endure catcalls from other male musicians while they played on the same venue. But even so, they didn’t just emerge victorious by being one of the most successful female rock acts but they have showed their remarkable endurance. Ann explained how they were able to make it through the years when other bands were disbanding or breaking up: “No matter what else is going on in the other parts of our lives, when we play together we always communicate just the same way we did as when we were little kids.”

Also known as the ‘Punk Poet Laureate’, she wasn’t just a singer and songwriter. She was a big influence in the New York City punk rock movement and she would often incorporate poetry into her music. She was always unafraid to experiment and her subscription to all things unconventional resulted in her critically acclaimed album, “Horses.” It may not have received heavy airplay and could not boast of huge commercial success but it’s still widely considered as one of the greatest albums of all time and something that hugely influenced the punk rock era. NME’s Charles Shaar Murray even described it as “an important album in terms of what rock can encompass without losing its identity as a musical form, in that it introduces an artist of greater vision than has been seen in rock for far too long.” Even at 69 years old, Patti Smith shows no signs of slowing down as she is slated to perform ‘Horses’ for Bluesfest 2017.

Suzi Quatro paved the way for all female bass players in rock music. This leather-clad rock chick was a trendsetter and a legit glam-rock icon. And she also played Leather Tuscadero in the American TV sitcom, ‘Happy Days.’ In one of her interviews in 2012, she said: “Before I did what I did, we didn’t have a place in rock ‘n’ roll. Not really. You had your Grace Slicks and all that, but that’s not what I did. I was the first to be taken seriously as a female rock ‘n’ roll musician and singer. That hadn’t been done before. I played the boys at their own game. For everybody that came afterward, it was a little bit easier, which is good. I’m proud of that. If I have a legacy, that’s what it is.” She proved that she can be tough but sexy all the same. When you think of Suzi Quatro, you picture out the girl in an all-leather ensemble carrying a big bass guitar. But beyond all that, she exudes enough strength to take on this once-male dominated industry.

She’s a folk rock royalty and was even hailed by the Rolling Stone magazine as “one of the greatest songwriters ever.” She’s known for her wide-ranging contralto voice and her fusion of rock ‘n roll, classical music, R&B, and even jazz. Further on, she even explored pop and electronic music. This is one extremely talented musician who’s unafraid to dip her toe in unfamiliar waters. But her work of art isn’t confined to music alone. She is also a painter and in fact, she designed her album artwork herself. She is undeniably one of the finest artists of her generation and you don’t have to look far to see that. And she became a huge inspiration to many women to push the boundaries in music – that it’s no longer an exclusive boys’ club. Her talent encompassed gender and she was harmonically innovative as proven by ranking at no. 72 on Rolling Stone’s list of ‘Greatest Guitarist of all Time.’

If we’re going to talk about Linda Ronstadt’s achievements, we’ll need an entire day. From gold, platinum and multiplatinum albums to being a recipient of Grammy Awards, Emmy Award, American Music Awards, Academy of Country Music Awards to name a few. Last 2014, she was inducted into the Rock and Roll Hall of Fame. Her music is mainly rooted in country and folk rock but she eventually ventured into laid-back and adult contemporary pop. Jazz Times’ Christopher Loudon wrote that she is “Blessed with arguably the most sterling set of pipes of her generation.” In the late ‘70s, she became the ‘highest paid woman in rock’ not only because her records are selling like pancakes but she also managed to sell-out arena and stadium concerts. On December 2012, however, she was diagnosed with Parkinson’s Disease and that ended her singing. And it’s heart-wrenching when she told Vanity Fair: “I don’t miss performing particularly, but I miss singing.”

She’s a four-time Grammy Award winner and one of the artists who received heavy airplay in the early days of MTV. People loved her mainstream pop/rock music and on the surface, she was oozing tough sexuality and couple that with powerful vocals, you get a rock chick who had huge hit songs and sold-out concerts. Did you know, though, that she once planned to attend Juilliard School? But of course that was before she realized that a career in classical music wasn’t exactly what she wanted. Passion never fails and perhaps that’s why she had three gold, five platinum and two multiplatinum albums all certified by the RIAA. She also said this about her rock music: “I was 22 by the time I started to sing rock, so at first I was very conscious of technique and I was overly technical. That proved to be inhibiting so it was a disadvantage until I began to sing intuitively. That’s the only way to sing rock – from your gut level feelings. It’s the instinct that the best singers have.”

You can call her “The Acid Queen” or “The Chrome Nun” but this rocker chick played a huge role in the psychedelic music scene back in the swingin’ ‘60s. Her “White Rabbit” wasn’t just a huge hit but it became a key inspiration for women who are into rock music. Watch her old interviews and you’ll see that aside from being musically gifted, she’s witty and humorous too. But if you’re hoping for a comeback tour or some show from this Jefferson Airplane legend, you’d be sorely disappointed because she was quoted saying that “All rock-and-rollers over the age of 50 look stupid and should retire.” And she even added on an interview with Forbes, “Rock is like sports. You have a certain run, then get out.” Right now, she is more than happy getting busy with her mixed media artworks and she even has art gallery shows! Man, what can Grace Slick not do?

The Queen of Rock ‘n Roll and Godmother of Punk, Joan Jett is an iconic figure in feminism. Her sound is stripped down but loud and her image is that of a tough and defiant rock chick. When she dropped hits like “Bad Reputation” and “I Love Rock ‘n Roll”, she just ushered in a fresh generation of female rockers. One of her major influences was Suzi Quatro from whom she tried to emulate to tough-girl look. But her career wasn’t all leather-clad sneers or punk rock sass. With perfect melodies, it’s not surprising that her songs continue to live on – be covered by new artists, used in a sporting event or as a movie soundtrack. Joan Jett also shared these words of wisdom when she sat down for an interview with BIO: “People are quick to tell you what you can’t do. They never tell you what you can do. I think encouragement, whether it’s obvious encouragement or whether you get it from a song on somebody’s record, just saying, “Hey, she did this, so I can do it,” I think that’s important. I think however you get it, it’s important to be encouraged in life.”

This witchy fairy godmother is the epitome of class. She can bring the house down with her powerful, distinctive hoarse vocals and yet still stay fashionably gorgeous. See her outfits when she’s performing live and you’ll understand what we mean. She’s not just a pretty face but she has some serious talent to boot. She may be quite a sight on stage but her songwriting skills are something else too. She’s a prolific composer and the hit songs “Rhiannon” and “Landslide” were testaments to this. With her timeless bohemian chic style, she has popularized shawls, fringes and ruffles, boots and velvet – lots and lots of velvet. And she spills to Rolling Stone why these are her outfit choices: “The reason I wear the ponchos and the big shawl-y chiffon things is because I realized from a very young age, if you were 5 foot 1, and you wanted to make big moves and be seen from a long way away, if you weren’t twirling a baton of fire, you needed something that was gonna make you show up. Like a Las Vegas showgirl, really. You need big moves. If you’re gonna dance, you gotta really dance.”

Her powerful raspy bluesy voice will make you believe that angels exist. When she belts out the songs, it’s always charged with so much emotion and soul. On stage, she had an electrifying presence and a brassy swagger. As an audience member, you can’t help but stare at her in amazement. Her vocals were not from this world. And although her career was short-lived, she has left us with so many timeless classics like “Piece of my Heart” and “Me and Bobby McGee.” She gave powerful and unforgettable performances and eventually became one of the most influential and iconic female acts in rock ‘n roll but behind all that is a vulnerable woman who used to be bullied in school. During one interview, she shared: “When I get scared or worried I tell myself “Janis, just have a good time.” So I juice up real good and that’s just what I have. I just live for happiness. You should use everything you’ve got to be happy.”