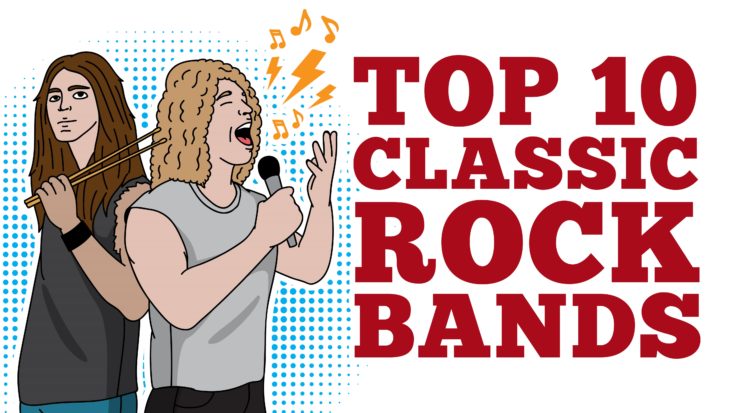 The thing about classic rock is it never gets old. If you want proof, listen to today’s songs and you’ll find so many cover versions of timeless pieces like Bohemian Rhapsody (which was used as soundtrack for Suicide Squad) and the like. And who do we have to thank for such great gift to humanity? The musicians who made it their life’s purpose to give us nothing but the best songs. And so we rounded up the top 10 bands who are the very definition of classic rock.

Their band name is pretty lengthy so let’s just start using either Creedence or CCR. They may come from the San Francisco Bay Area but their music has a Southern rock flavor. At one point, their lyrics also contained political and social stance. Although they disbanded after four years, their contribution to classic rock is undeniable. Aside from performing at the Woodstock festival, thus cementing their legendary status, they have also sold a total of 26 million albums in the United States. At their peak, their tight and punchy arrangements reflected the individual brilliance of each band member. Their hit song “Proud Mary” eventually became their most covered track with one rendition by Ike and Tina Turner becoming extremely popular. John Fogerty, their primary songwriter and lead vocalist and guitarist, was literally the dominant voice in the group. Their fans were heartbroken when the band separated but hey, at least we have great songs to listen to over and over again.

Lindsey Buckingham, Stevie Nicks and Christine McVie may have joined the band at a later date (after the fake Fleetwood Mac and hard-edged British blues era) but after the release of their 1975 eponymous album, it became a huge hit with sales of over 5 million copies. From McVie’s “Say You Love Me” to Nicks’ “Landslide” and “Rhiannon”, Fleetwood Mac has managed to smoothly transition from neo-psychedelic blues-rock music to a pop/rock style. But behind the hit songs were relationship troubles (John and Christine, Lindsey and Stevie, Mick and his then-wife) and thus the emotional turmoil and internal tensions resulted into the critically acclaimed ‘Rumours’ album. From multiple top ten singles to winning the Grammy Award for Album of the Year, it became so successful that not only did it receive diamond certification from the RIAA but it also became the second biggest album of all time, well it did sell 40 million copies worldwide. Decades later, Stevie Nicks can still bring the house down!

While lead vocalist and songwriter Jim Morrison was often associated with his drunken antics (case in point, when he was so drunkenly rude while out with Janis Joplin that she ended up smashing a bottle of Southern Comfort on his head), let’s not forget that he was also a charismatic singer and talented poet. Like, how many can manage to improvise spoken poetry passages during live performances? And despite his wild personality and rebellious nature, he will always be one of the most iconic frontmen in rock history. The Doors was an influential band which was controversial mostly for Morrison and his unpredictable moods and antics even while on stage. From 1967 up to Morrison’s sudden death in 1971, they released a total of eight albums and according to RIAA, they have sold over 100 million records worldwide. And The Doors has managed to make it to every ‘greatest artist’ list from various magazines including that from Rolling Stone.

When you hear ‘Lynyrd Skynyrd’, you’d probably think “Sweet Home Alabama” or “Free Bird.” These songs are basically immortal. They’ve been covered over and over again but nothing can ever rival the original. It could be because of Ronnie van Zant’s pleasant baritone voice or the individual geniuses of each of the band members. They were the very definition of Southern rock and it was all about hard rock swagger coupled with blues rock style. ‘Free Bird’ and its famous triple guitar attack continue to receive regular airplay in classic radio stations. And when they opened for The Who, their fan base only grew larger. After the tragic airplane crash in 1977 and the loss of three members including Ronnie, we thought it was the end of Lynyrd Skynyrd. Fortunately, the band persisted and as long-time fans, we couldn’t be happier. The reunion wasn’t the same but we love how they kept Ronnie’s memories alive.

Do you recognizing that ‘love at first sound’ feeling? You know, when you hear the first few seconds of a song and instantly realize it’s going to be one of your favorites? Because that’s exactly what we felt when we first heard of ‘Hotel California’. Well about The Eagles? Where do we even begin? They have 6 Grammy Awards, 5 American Music Awards, 5 number 1 singles, 6 number 1 albums and have sold more than 150 million records. Even after a 14-year hiatus, people were still crazy about the band and their music. Most would say that their style fuses folk, country and rock ‘n roll. The Rolling Stone magazine described their sound as “country-tinged vocal harmonies with hard-rock guitars and lyrics”. But they were never confined to a single genre. They explored hard rock, bluegrass, R&B, funk and also pop rock. With flawless vocal performances added to the mix, it’s safe to say The Eagles were the epitome of utter perfection.

If you’ve been to any of their concerts, Pete Townshend’s guitar showmanship is probably one of the things you always look forward to. Sometimes, he does a lightning-fast windmill motion. Or at other times, he destroys his guitar. From the breakthrough hit “My Generation” to the absolute masterpiece “Who’s Next”, they easily made it to this list considering they are one of the most influential rock bands of all time. Aside from selling over 100 million records worldwide and achieving commercial success for their albums, they also cemented their place in history because of their unforgettable performances at Woodstock and the Isle of Wight festival. To describe their musical style, Townshend said it was “power pop” and their sound was influenced by different genres like rhythm and blues and contemporary pop. After meeting Jimi Hendrix at Monterey, he also became another influential icon to the band. According to Jack Lyons, “The Who weren’t a joke, they were fucking real, and so were we.”

For over half a century, the Rolling Stones proved that good music never dies. Blues-based and hard-driving, it was their definition of what rock ‘n roll should be that propelled them into international stardom. They were strongly identified with the ‘60s rebellious counterculture thanks to Mick Jagger’s strong stage persona and unforgettable showmanship, and the sublime rhythm from Keith Richards, Brian Jones and Bill Wyman, and of course the brilliance of Charlie Watts. They weren’t afraid to experiment as they incorporated contemporary pop and blues into rock. They were a huge hit to the masses because according to critic Sean Egan, the Rolling Stones “were being perceived by the youth of Britain and then the world as representatives of opposition to an old, cruel order—the antidote to a class-bound, authoritarian culture.” Other bands came and went but the Rolling Stones and their remarkable endurance only shows how iconic and influential they are in rock music.

What is it about Pink Floyd that makes them one of the best classic rock bands of all time? Is it their highly-addicting psychedelic and progressive music? Their elaborate and fancy concerts? Philosophical lyrics? While they’re one of the pioneering bands in psychedelic rock, some also describe their style as acid rock, progressive rock or art rock. They were innovators and masters of improvisations. And alongside their easily identifiable sonic signature sound was David Gilmour’s guitar work which was integral in every Pink Floyd song. Once called by critic Allan di Perna as “the missing link between Hendrix and Van Halen”, Gilmour wasn’t a show off. He’s not even flashy enough to play lightning-fast pieces. Instead, he went for huge-sounding riffs and well-paced solos – something that today’s guitarists would want to emulate. Rolling Stone has once described Pink Floyd as “purveyors of a distinctively dark vision” owing to their song lyrics and themes and Roger Waters was even dubbed as “the gloomiest man in rock.”

Although their earlier works were combinations of heavy metal, progressive rock and hard rock; they soon incorporated pop rock and arena rock into their songs. This is a band that’s a league of their own. Classic hit songs like “We Are The Champions” and “We Will Rock You” are staples at sporting events. “Bohemian Rhapsody”, on the other hand, is the third best-selling single of all time in UK and undeniably the work of a genius. So what’s with Queen? Their concerts and live shows were elaborate but no amount of smoke bombs can take away the crowd’s attention from their frontman Freddie Mercury. His vocals and stage presence were on a different level. They were known for fusing heavy metal with glam rock but still, nothing beats the vocal harmonies and how they managed to create some of the most popular classic rock songs. Besides, who else can pull off putting an operatic passage in a rock song?

All hail the rock royalties! If there’s any word that would best describe Led Zeppelin, it would be ‘innovative.’ Their music’s origins was rooted in blues and they incorporated various elements into their sound – jazz, country, folk, reggae, soul, funk and of course rock ‘n roll. Musicologist Robert Walser perhaps summed it best when he said, “Led Zeppelin’s sound was marked by speed and power, unusual rhythmic patterns, contrasting terraced dynamics, singer Robert Plant’s wailing vocals, and guitarist Jimmy Page’s heavily distorted crunch.” This band is simply on a different level. They shine individually – Robert Plant’s jaw-dropping vocal range and incredible stage presence, Jimmy Page’s face-melting guitar work, John Paul Jones’ melodic bass lines, and John Bonham’s powerful drumming. Every song was a masterpiece that transcends specific music genres. And at the peak of their career as a band, they were unrivaled and unmatched. Highly influential and enduring, it’s no surprise that the group’s record sales were estimated somewhere between 200-300 million units.