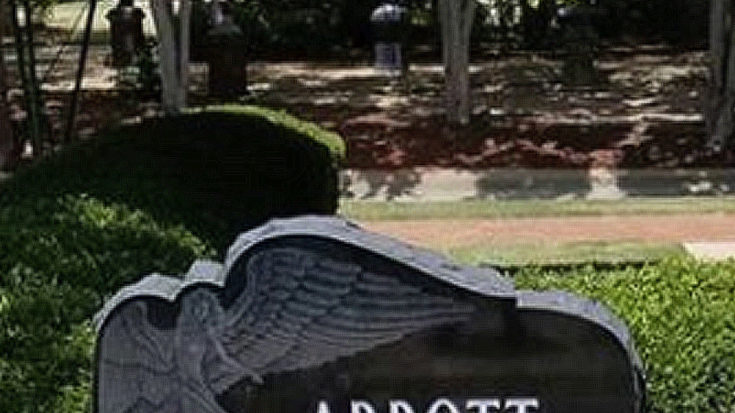 One of rock’s greatest chapters came to a close as rock legend Vinnie Paul Abbott was laid to rest in Arlington, Texas over the weekend.

Paul, who died on June 22nd from what sources say was “a massive heart attack,” was laid to rest Saturday afternoon in a private ceremony at the Moore Funeral Home in Arlington, close friends and family torn between the joy at having been part of his brilliant life, and the bone deep sorrow of having lost yet another Abbott boy.

A quiet ceremony marked with tears and laughter as loved ones looked back on their favorite memories of the late drummer, Vinnie Paul’s funeral ended with the most bittersweet of moments as his custom KISS casket was lowered down into the ground beside brother ‘Dimebag’ Darrell Abbott – a moment that can only be described as both heartbreaking and extremely comforting.

But why would folks find comfort in something so overwhelmingly sad?

It’s simple: 14 years is too long to spend without your other half.

Born two years apart, Vinnie and Dime lived in each other’s pocket for 38 years. You never saw one without the other, their tight knit relationship leaving people both intrigued and if we’re to be honest, a little jealous. They weren’t just brothers; they were best friends who shared everything they had with each other, knew what the other was thinking and were the other’s biggest fan and loudest cheerleader.

Vinnie’s death has been crushingly painful; what kind of cruel world snatches both Abbott boys away like a thief in the night? But just as overwhelming is the tremendous sense of peace that comes with knowing that the Abbott brothers are together again, in a place where they’ll never get old, the Black Tooth Grins never run out, and best of all?

I miss this guy everyday but the most on this day !!!! THANK YOU FOR THE INSPIRATION TO CARRY ON !!!! YOU WERE THE BEST AND YOU WILL NEVER BE FORGOTTEN !!! I LOVE YOU !!! CHEERS

They’ll never have to say goodbye to each other again.

“54 is young, way too freaking young…if there is any collateral beauty in this soul-crushing, tear-stained loss, it is this,” wrote friend Nick “Hitchcock” Bowcott of Vinnie and Dime.

“After nearly 14 years apart: Vinnie and Dime are finally together again in an even better place. Their last words to each other on this planet were “Van Halen” (their code for having a kickass show). I know they’re in God’s Tavern (© Zakk Wylde) right now, clinking their glasses while exclaiming “Van Halen” in unison and both sporting THOSE grins.”