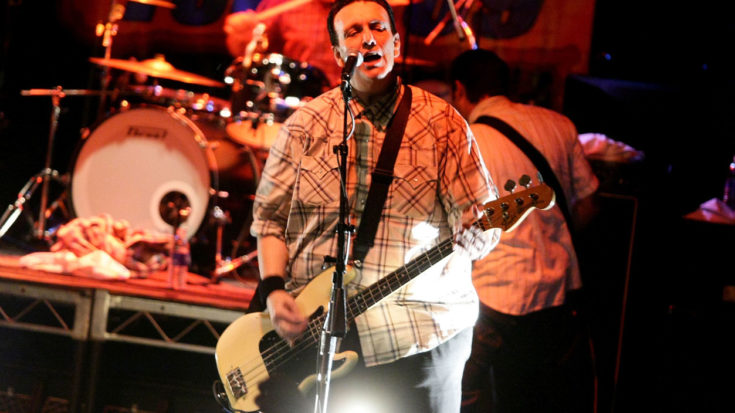 It’s with a heavy heart that we report that Steve Soto, founder of California punk outfits The Adolescents and Agent Orange, has died at the age of 54.

The news was confirmed early this morning by Soto’s longtime friend and Adolescents bandmate Tony Reflex, who took to Twitter to issue a heartbroken statement about Soto’s passing. Like many who knew Steve, Tony Reflex finds himself at a complete and total loss for words as he tries to reconcile with the painful reality that is life without his friend.

with heavy heart i share the passing of steve soto, my friend and bandmate since 1979. i dont know what to do. or to say.

“With heavy heart I share the passing of Steve Soto, my friend and bandmate since 1979,” Reflex wrote. “I don’t know what to do. Or to say. Goodbye, my brother.”

Soto, 54, had just wrapped a brief tour of the East Coast with The Adolescents only this past weekend, with plans for a quick jaunt across Europe slated for later this summer. His bandmates issued a statement of their own during an interview with Punk News earlier today, and while no official cause of death has been given, Soto’s Adolescents bandmate Dan Root revealed with the permission of Soto’s family that he “passed away peacefully in his sleep”.
“I’m sorry to break such bad news in such an impersonal way, but the family of Steve Soto would like everyone to know that he passed away peacefully in his sleep today,” reads the band’s statement. “I’m sure this is a terrible blow to all of you. He will be missed. We will be posting details on a memorial as plans are finalized.”

Born August 23, 1963, Soto was a gifted multi-instrumentalist with roots in the California punk scene, beginning with Agent Orange in 1979 and launching The Adolescents one year later in 1980. He faithfully played guitar in both bands, remaining the sole remaining original member of The Adolescents and steered the band through decades of breakups and lineup changes before the band made its final return in 2001.

In addition to his time with The Adolescents and Agent Orange, Steve played with Los Angeles outfit Legal Weapon and in the 90s linked up with Joyride, 22 Jacks, Steve Soto and the Twisted Hearts and Manic Hispanic – a semi-parodic tribute to all things Chicano in the United States.

As Soto’s bandmates publicly mourned his loss, the tributes from record labels, fans, and friends in the music industry began to roll in across social media.

We’ve lost a true punk icon. RIP Steve Soto, founding member of The Adolescents and Agent Orange. Our hearts go out to family, friends, and fans. You left this world too soon but your music and your influence will live on forever. pic.twitter.com/XA7kTmyrwU

We are shocked & saddened to confirm that our wonderful friend Steve Soto passed away in his sleep. An immeasurable loss to music & humanity, the shock has yet to really sink in…

I just found out Steve Soto passed away. He fought through so many health issues & they finally caught up. He was one of the most positive people I ever knew. Did the whole @VansWarpedTour with the Adolescents in a van last summer.
RIP my friend.

We lost a dear friend, Steve Soto of the @TheAdolescents, who passed away too young. But his influence will carry on and his presence will be remembered as a gift to us all.

When you talk about California punk Rock and Punk Rock in general Steve Soto will forever be on top of the list of people who put it on the map. He 100% helped pave the way for all of us who decided to pick up an instrument and play our version of Punk. You will be missed. RIP pic.twitter.com/TSRdvkuVTB

We are devastated by the news of Steve Soto’s passing. He played in so many great bands, was a great bass player, guitar player, & singer, but mostly he was just an honest & sweet guy. He was our hero in the Adolescents and an inspiration to us as musicians. #heartbroken

Again, no cause of death has been given for Steve Soto at this time and as this is a developing story, more information will be coming in the hours and days to come. Be sure to stay tuned to I Love Classic Rock for more updates as they become available.

Our hearts are with Steve’s family, friends, fans and bandmates as they begin to navigate life without him.