They Supported Iron Maiden and Def Leppard- Remember them? They’re Back! 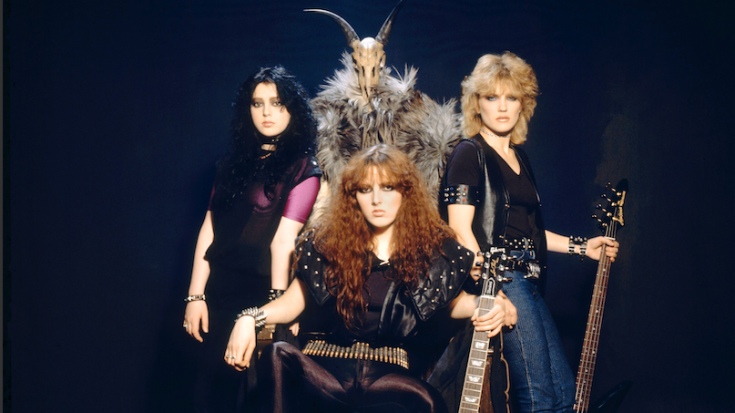 Rock Goddess formed when sisters Jody and Julie Turner were 9 and 13, during 1977 in South London. Their high school friend, Tracey Lamb, became their bassist. The group went through a round of second guitarists until deciding to focus on their work as a trio.  They captured the working-class gritty feel of South London in their hard-hitting heavy metal jams. Rock Goddess performed mostly in the underground scene. They signed their first contract in 1982 with A&M- after being scouted at their gig during the Reading Festival. Their debut album, Rock Goddess, was released in 1983.

The Turner sister’s father and manager was a musician and had a large influence on the girls. As Jody recalls, “My dad also had a rehearsal room and one day I brought Tracey down for a jam and from that minute the band was literally born…But I do remember that first day at rehearsal and Julie with her school skirt on behind the kit. We were all buzzing that we were in a band!”

Amidst the release of their album, the band started to struggle interpersonally. Drummer Julie Turner was still a minor in high school and wasn’t able to attend the complete line-up of shows. The label had brought on a second guitarist which upset Tracey Lamb and she quit the band for some time. Rock Goddess managed to release their second album, Hell Hath No Fury, in October 1983. The band started to gain momentum and landed support slots with Iron Maiden and Def Leppard on their European tours.

“We toured with Leppard twice and apart from the band being lovely people, the crew and everyone were so helpful and nice to us and it was such a great experience. And then to watch them from the side of the stage with a beer – we were living the dream! Maiden like a game of footie so we often sound checked while watching them play,” Jody states about shows with headliners.

The band spent 25 years after their third album leading lives as independently and free as ever. Jody worked in programming and Julie mothered her children. Tracy worked in Girlschool for 10 years before moving to Spain and opening a rock club. The band mates  reformed in 2009 to play the Hard Rock Hell festival in Wales, UK.

Jody Turner brims with excitement for Rock Goddess’s reformation, “The main thing when we got back together was that the adrenaline and excitement and chemistry was there. We immediately knew it was the right thing, the way it should be and there’s certainly unfinished business. We’re really, really excited by this.”

Rock Goddess released a 3-track EP, It’s More Than Rock and Roll, in 2017 . They recorded a music video for their title track, “It’s More Than Rock and Roll,” and kept working ever since. Be sure to check out this video below this article. Tracey Lamb left the band and was replaced by Jenny Lane. With the new line-up, Rock Goddess plan to release their comeback record, This Time, in February of 2019.

“We’re looking forward to it, we’re really gonna enjoy it, and we’re just dying to get back out there. We’re not going in half-arsed. We’re aiming high!” exclaims Jody Turner.