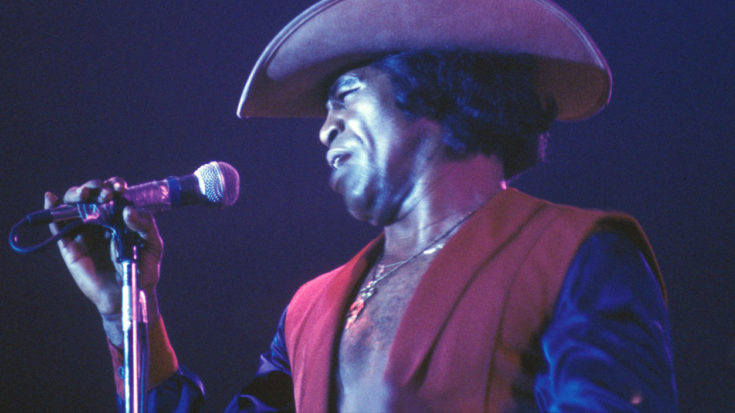 Brown Performs At The Opry

He wasn’t the first.

Charley Pride, O.B. McClinton, and DeFord Bailey – all black – had graced the stage at Nashville’s Grand Ole Opry before, so it wasn’t an issue of race and exclusion. Still, James Brown’s March 10, 1979 appearance at the Opry caused a fuss, turning some Opry legends downright hostile in the days leading up to his debut.

It all starts with Porter Wagoner. He’d run into James Brown several times over the years, and when Brown’s trip to Nashville brought the two friends together again, Wagoner invited him to perform at the Opry. Any other soul singer would have turned tail and run, but not James; a lifelong country music fan he jumped at the invitation, ready to embrace his country roots in front of a brand new audience as a date was set: Saturday, March 10th.

It didn’t go over so well.

Nashville clutched its pearls when Brown’s Opry appearance made the news. In fact, it’s safe to call the reaction to Brown downright hostile. Opry alumni Del Wood said, “I could throw up” at the idea of Brown gracing the stage of the  Opry; Jean Shepard called his presence “a slap in the face,” slamming Opry management and warning, “If Mr. Brown’s on the first show, I’ll appear on the second. If he’s on both, I won’t appear at all.” Some of the folks opposed to Brown’s appearance even organized a boycott. To combat fears that the backstage area would be empty, Opry management offered backstage passes to anyone wanting to see James Brown.

It worked; over 300 people showed up backstage.

The Opry wouldn’t let Brown use his horn section, so he used Porter Wagoner’s band instead and for a second, it looked like he just might manage to pull it off without upsetting the Opry crowd too much. He performed country standards “Your Cheatin’ Heart” “Georgia” and “Tennessee Waltz” to their delight, but when kicked into “Papa’s Got a Brand New Bag,” it was all over.

Dancing, doing the splits, microphone tossing, the works – James Brown was on fire, totally in his element. The reaction from the crowd, however, was exactly what you’d expect. “Everyone was outraged and upset” when Dolores Smiley, who “purposely arrived late,” arrived backstage. The real issue ultimately came down to the length of time Brown was onstage. Some say it was over 30 minutes, breaking previous performance records at the Opry, but Porter Wagoner later said that he recorded it and it was actually 17 minutes – it just seemed longer.

James Brown was never invited back, but one thing’s for sure: he definitely left a mark on the country world!