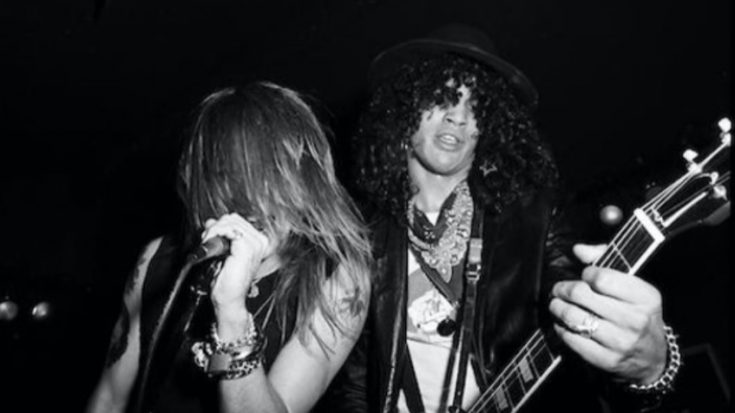 An audio clip of Guns N’ Roses’ first-ever performance of “Sweet Child O’ Mine” has recently surfaced online. The particular number came from the band’s August 23, 1986, set at the Whisky a Go-Go in West Hollywood. Frontman Axl Rose introduced the song saying, “All right, this one’s a new one. This is one of our newer ballads. This is something called ‘Sweet Child O’ Mine.’”


According to an interview with Slash in 2005, the song began as a riff that he had been playing during their rehearsal warm-up, sharing how “Axl said, ‘Hold the fucking phones! That’s amazing!'” The rest of the band helped in building around the riff for the next hour or so, with Rose even pulling out a poem he wrote for his girlfriend at the time to get inspiration for the lyrics. Slash called it a “sloppy ballad” then. The iconic ending section came from producer Spencer Proffer who was recording demos with the band after Rose asked a question about how the song was going to go – “Where do we go?”

Bassist Duff McKagan had the same sentiments as Slash, saying, It was like a joke,” he recalled. “We thought, ‘What is this song? It’s gonna be nothing.'” Good thing Mike Clink, who was tasked to produce their debut Appetite for Destruction, thought otherwise. He said, “That song made the hairs on my arms stand up. It was magical.”


The album’s first two singles, “It’s So Easy” and “Welcome To The Jungle”, failed to chart, prompting Geffen Records to release the ballad 11 months after the album was released. Much to everyone’s surprise, the song climbed the Billboard Hot 100 until it peaked at the top in early September and held the position for two weeks, greatly benefiting the band’s status.

“I hated it for years. But it would cause such a reaction – just playing the first stupid notes used to evoke this hysteria – so I’ve finally gotten to appreciate it,” Slash reflected.