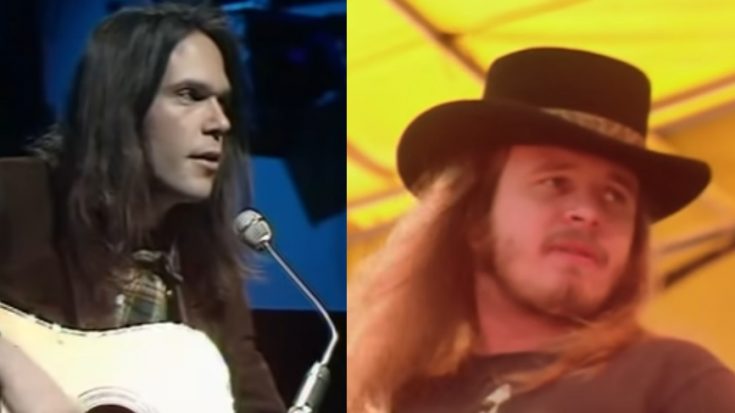 Neil Young’s liberal worldview didn’t approve of America’s Deep South ideology, which he considered as the opposite of everything he believed in. Of course, this didn’t sit well with the Southern youngbloods Lynyrd Skynyrd, who were equally as vocal as Young when it came to airing their sentiments. As expected, the two clashed frequently, and what better way to do it than through music?

The late frontman Ronnie Van Zant was a big Young fan prior to when they would clash, even wearing Neil Young shirts during Lynyrd Skynyrd concerts. But things changed when Young’s “Southern Man” lambasted the Deep South by talking about the region’s rampant racism, along with its historical notoriety with slavery and ties to the Klu Klux Klan.

Of course, Young tried to defend it and said that it was mostly about the Civil Rights Movement more than anything else, but it was too late. It was even brought up on his Decades record, the liner notes reading: “This song could have been written on a civil rights march after stopping off to watch Gone With The Wind at a local theatre.”

Young was in for strike two with “Alabama”, justifying that it wasn’t really about the state but he just felt like it was an appropriate title to get his message across. He explains that it was more of a personal idea rather than the state itself, and he only used it as a placeholder for whatever it pertained to.

Ronnie Van Zant felt obliged to represent his people and prove Young wrong. The result was the classic hit “Sweet Home Alabama”, which was meant to irk Young more than it was to be a great rocker for casual consumption. “I hope Neil Young will remember, a southern man don’t need him around anyhow,” the lyric sings.

Young, realizing that his point wasn’t received clearly by the listeners, apologized for how he wrote his songs in the 2013 autobiography Waging Heavy Peace. “‘Alabama’ richly deserved the shot Lynyrd Skynyrd gave me with their great record. I don’t like my words when I listen to it. They are accusatory and condescending, not fully thought out, and too easy to misconstrue.”

The folk rocker also took the song positively, praising it for its content and musicality. Whether if this was just a case of backpedaling or is actually the truth, all was well in the fact that the two parties have made up.

After making up, Young sent Lynyrd Skynyrd a demo of “Powderfinger”, which he allowed the band to record on their next album. This wasn’t possible, however, as a tragic plane crash claimed the lives of Ronnie and other members of the group before they had the chance to touch the material. Young offered a medley of “Alabama” and “Sweet Home Alabama” as an emotional tribute to the group weeks after the incident.