The Story of Brian May And Eddie Van Halen Trading Guitars 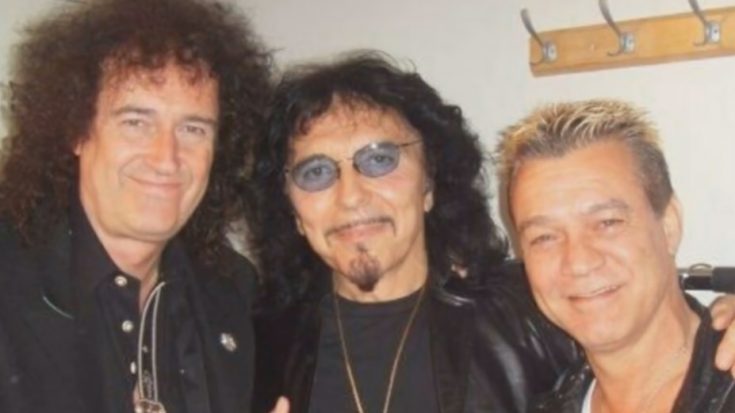 There’s no denying how a guitarist’s skill dictates how he sounds, no matter what instrument he picks up. This is what Brian May shared in a recent interview with Guitar World during the making of his 1983 Star Fleet Project mini-LP.

May admitted that he had some difficulty with the Frankenstrat’s tremolo system, however. He added: “It didn’t feel familiar, no, because his tremolo is entirely different to mine, it’s loose and flops about. Mine is on the verge of being immobile, and wherever I put it, it stays. So that’s very different. I’m sure I could have got used to it after a while, but we just got on with playing basically.“


The two first met backstage during Van Halen’s early days when the band opened for Black Sabbath and shared their thoughts over the technical aspects of the guitar. This gave May some insight on how Van Halen’s pickup placement gave him his unique tone.

“We talked about what he called ‘the brown sound,’” May said. “He said he’d been very influenced by the way my guitar sounded, the breadth of it and the way it spoke. And he wanted that. He said, ‘I wanted that brown sound.’ And it’s a question of where you put the pickup, at what point under the strings – it’s technical talk.”

“He said none of the guitars he’d used had it in quite the right place, so he moved his pickup. His guitar looks very individual, but the thing that really made it so individual in sound is because he tuned where that pickup was – to like a hundredth of an inch – to get the right harmonics to make the brown sound. And he had to have the right amp, of course. So we talked a little bit about that. But to be honest, it was more about, ‘What shall we play?’” he continued.

Ted Nugent has experienced the same thing in 1978, saying in a 2018 interview that Eddie Van Halen worked around the feedback from his Gibson Byrdland and “started pulling these mystical licks, and it sounded just like him, but out of my rig. And I grabbed his Strat – his mutilated, bastardized Strat – and I started playing ‘Dog Eat Dog’ or ‘Cat Scratch [Fever]’ or something, and it sounded just like me. If music is anything, it’s not only the universal language, not just the universal communication for people anywhere in the world at any time, but it’s also a personal execution of the musician’s sonic vision.”