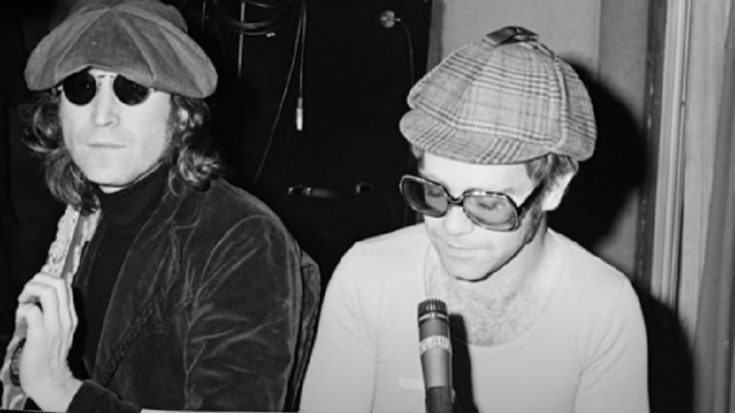 It was an unlikely friendship that sprouted between the two titans of the rock industry: John Lennon and Elton John. The special bond that the two had shared was deeper than what’s expected; at which point, Lennon was more than glad to let Elton become a part of his family when the former welcomed him to be the godfather of his son, Sean.

In 2020, Elton admitted in an interview with Sean Lennon that his relationship with John felt like a “whirlwind romance.” “That was the kind of wonderful two or three-year whirlwind romance we had, and it was such an important thing in my life, Sean,” the singer expressed wholeheartedly. Albeit the two didn’t develop their careers at the same time, both have a certain effect on each other’s music style.

The improbable encounter happened during Lennon’s infamous “lost weekend,” where he was caught up in his hedonistic lifestyle: living with his lover May Pang after he separated from his wife, Yoko Ono. Lennon’s life was a blurry mess, but he didn’t want to leave music behind. That’s how Elton John entered his life.

Lennon was adamant to ask John’s help, who was now becoming an artist of his right. When the two met, they immediately clicked; it led them to create Lennon’s comeback track, “Whatever Gets You Thru the Night.”

With Elton being extremely confident that this song would top the charts, he proposed a bet between them: If it would land at the number 1 spot, John should have to perform this song with Elton at the Madison Square Garden. Months later, and the song did indeed hog all the praise, giving Lennon his no. 1 single in the US.

Keeping his promise, John Lennon joined Elton for an iconic performance at the Madison Square Garden. But little did everybody knew; it was the final live show of Lennon’s career. “Empty Garden (Hey Hey Johnny)” was Elton’s tribute song to his dear old friend and the legendary moment he’d shared with him onstage.