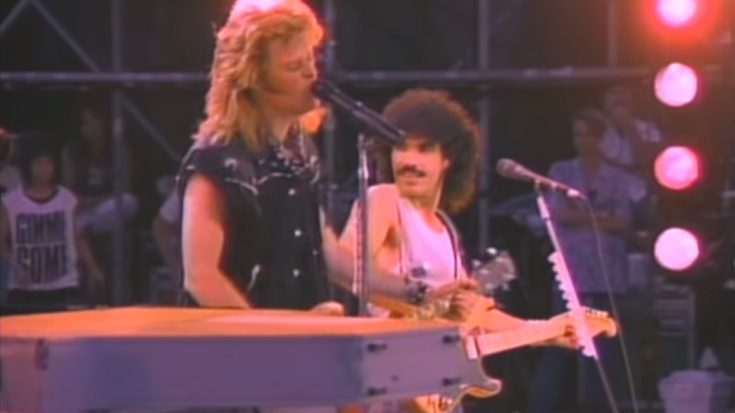 Daryll Hall and John Oates, or Hall and Oates, is probably one of the most successful musical duos in history. Dabbling with their very own sound of pop and soft rock, the duo was a landmark attraction in the late 70s and early 80s. One of their most successful singles was the chart-topping “I Can’t Go For That (No Can Do)” from 1981. Read on to know the story behind the song.

The title was a phrase that Hall often used when peer pressure often had him in an awkward spot. As for the arrangement, it was improvised with the help of engineer Neil Kernon at the Electric Lady Studios in New York.

“Remember the old Roland CompuRhythm box? I turned to the Rock and Roll 1 preset, sat down at a Korg organ that happened to be lying there and started to play this bass line that was coming to me. It’s the old recording studio story: The engineer heard what I was doing and turned on the tape machine. Good thing, because I’m the kind of person who will come up with an idea and forget it. The chords came together in about 10 minutes, and then I heard a guitar riff, which I asked John, who was sitting in the booth, to play,” Hall recalled in an interview with Mix Magazine.

John Oates added: “Daryl came up with this great bass line, using whatever sound happened to be on the organ, and Neil miked it and the drum machine. Daryl came up with the ‘B’ section chords, and then I plugged my 1958 Strat directly into the board, which was either an early SSL or a Trident.”

As for the song’s lyrics – which is open to interpretation but mainly tackles about the music industry and its way of bossing artists around – was written with the help of his girlfriend Sara Allen. Another fun fact about the song is that Michael Jackson confessed that “Billie Jean” was greatly influenced by the song. “Michael Jackson once said directly to me that he hoped I didn’t mind that he copped that groove. That’s okay; it’s something we all do,” Hall said.