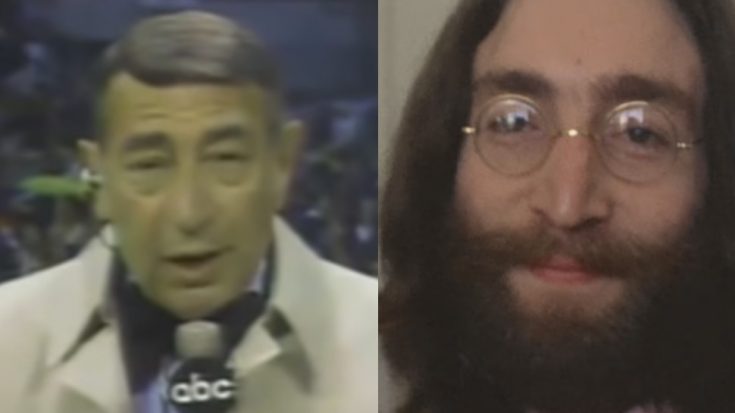 Howard Cosell was tasked to announce to millions of Americans the devastating news of John Lennon’s death on December 8, 1980. The pressure was real and he didn’t want to deliver the message initially.

Cosell was one of the biggest names in sports broadcasting in the nation at the time, covering numerous events like boxing, baseball, and even the Olympics. But on that day, he was on Monday Night Football hosting a game between the New England Patriots and the Miami Dolphins.

“He was shot outside his apartment, the Dakota apartment building. Fellas, I just don’t know. I’d like your opinion. I can’t see this game situation allowing for that news flash,” Cosell was heard talking with partner Frank Gifford. It didn’t help that he was friendly with the deceased as well, having interviewed him on several occasions.

In Cosell’s indecision to deliver the news amidst the ongoing sporting event, Gifford pushed him to do so. “You’ve got to. If you know it, we’ve got to do it. Don’t hang on it. It’s a tragic moment, and this is going to shake up the whole world,” the former NFL quarterback said.

Gifford used the New England timeout to bring the matter to light. “Three seconds remaining. John Smith is on the line. And I don’t care what’s on the line, Howard, you have got to say what we know in the booth,” he said.

“Remember, this is just a football game, no matter who wins or loses,” Cosell opened before breaking the tragic news. “An unspeakable tragedy confirmed to us by ABC News in New York City. John Lennon, outside of his apartment building on the West Side of New York City. The most famous perhaps, of all of the Beatles, shot twice in the back, rushed to Roosevelt Hospital. Dead on arrival.”

Gifford applauded his partner for his decision to break the news, saying in the ESPN program Outside The Lines: “I thought he handled it extraordinarily well,. Honestly, I was so concerned that maybe we had done the wrong thing. As it turns out, we didn’t.”