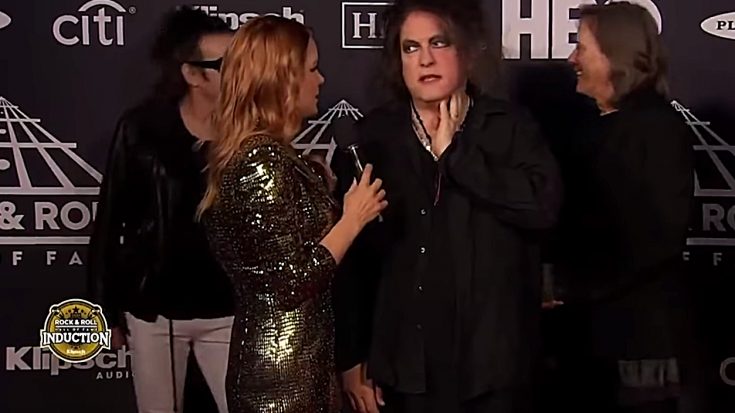 The 2019 Rock & Roll Hall Of Fame induction ceremony is officially behind us and it goes without saying that the night was full of amazing surprises, speeches, and performances. From Joe Elliot’s incredible acceptance speech to Don Henley joining Stevie Nicks on stage, this night will be talked about for years to come.

Every single artist that was inducted that night was truly deserving of being inducted. From Def Leppard, to Stevie Nicks, to Janet Jackson, to The Zombies, to everyone in between, each inductee was truly long overdue. One such band was The Cure, whose frontman unintentionally had the funniest moment of the night. Watch below…

Funniest moment of this year's HOF…

As enthusiastic as ever, Robert Smith of The Cure was clearly not as excited as this reporter. But honestly, when you’ve worked as hard as he has and are as goth as he is, what other response could you possibly give?

I think Smith is an accurate representation of all of us being not even half-way through 2019. And to be fair, it’s hard to be as excited as that reporter, because she was REALLY excited. But hey, that just means she’s good at her job. Below is the full interview.

In all fairness, it looks like the cure had an incredible night and were finally inducted into the Rock & Roll Hall Of Fame. After years of waiting, the hall did the right thing by inducting this legendary band.

Be on the lookout for when footage of this incredible makes itself available because moments like this and many others are ones that you’re gonna wanna watch over and over again.