The 10 Songs Prince Gave Away 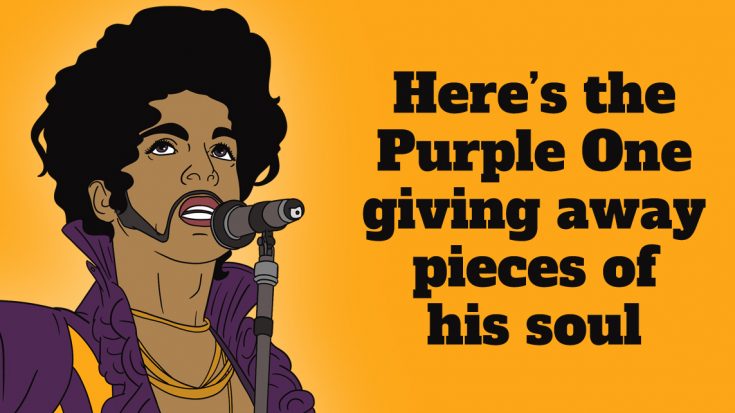 Well-rounded is an understatement to describe Prince. The man knew how to rock, was soulful, could sweep the floor with pop – if you can name it, damn sure the Purple One can do it. Even in songwriting, Prince was nothing short of a visionary. He could smell success from miles away and was ahead of his time when he wrote them. But he didn’t keep them all to himself, as he knew what fit in his arsenal and what was perfect for others. Here are some of Prince’s best songs that he gave to other artists to perform.

“How Come You Don’t Call Me” – Alicia Keys

The rarity “How Come You Don’t Call Me” was a Prince original repurposed in Alicia Keys’ Songs in A Minor. She earned it after proving her worth as a budding artist and even became friends with Prince himself, inducting the artist into the Rock Hall of Fame in 2004.

Prince chose well when he established The Time, but the two still needed every help they could get, and what better way to do so than go to the man that brought them together? “Jungle Love” is clearly drenched in Prince’s funk influences and was something that would truly shine on the dance floor.

Even someone as renowned as Patti LaBelle had to reach out to Prince for her album, Be Yourself, for added input on her new material. “Yo Mister” was created solely for this release where Prince took a dip into modern swing and did the production for the song as well. The song about the potential downfall of a father-daughter relationship net LaBelle one of her best commercial-performing songs ever.

Imagine having Prince’s admiration that it was second nature to trade creative ideas with the Purple One. That’s how special the musician regarded Sheila E., where he even said that he and bassist Andre Cymone were having a backstage banter and fought over who she would take as her husband from both of them.

“When You Were Mine” – Cyndi Lauper

The song was originally a part of Prince’s 1980 release, Dirty Mind, but was never released as a single and was instead given a special 12-inch release with “Gotta Broken Heart Again” and “Uptown” featured as the B-side to the 1981 hit, “Controversy”.

Cyndi Lauper made the song her own on her 1983 debut LP, So Unusual. The album was fitting in that Lauper didn’t care for changing the masculine pronouns of the original lyric. Moreover, she tweaked it with a slower tempo and squeezed synths into the mix that would soon be prevalent in her future works which certainly did Prince’s songwriting justice.

“Why Should I Love You” – Kate Bush

British act Kate Bush wrote and designed most of the lyrical and musical elements on “Why Should I Love You”, prepping it for inclusion in the Red Shoes album. To add some spice to the mix, Bush sent the song to Prince for backing vocal contributions after he agreed to do so.

Prince was a little behind schedule in returning the tapes, and Bush’s team realized why when they finally got them back. Prince didn’t just add backing vocals but sprinkled bits and pieces of his musical DNA into the song. Bush and her producer Del Palmer weren’t so sure on how to approach the altered record and spent a considerable amount of time to turn it back into a Kate Bush record.

Who would’ve thought that the infectious pop anthem with employment woes as its driving force, The Bangles’ “Manic Monday”, was written by Prince? He perfectly captured the corporate grind dressed in a jangly pop tune.

It became the group’s first hit, where it reached #2 on the US charts. In a Songfacts interview, Susanna Hoff said: “He was really thrilled with how it came out. I think he might have said something like, ‘Oh, I was surprised you guys didn’t use my track,’ or something. But he was very happy with it.”

“Nothing Compares 2 U” – Sinead O’Connor

Prince’s long-forgotten song from his side project the Family, “Nothing Compares 2 U”, was transformed by then-budding artist Sinead O’Connor and made it a hit in the ’90s. O’Connor’s ethereal vocal quality and the emotion she injected into it (by dedicating it to her mother who recently passed away) made it a potent cut that would overtake even Prince’s own version.

The music video features a headshot of O’Connor singing to the camera when a sudden tear rolls down her face, sparking heavy MTV airplay due to its innate sentimentality. As for Prince, here’s what he thought of the song: “I love it, it’s great! I look for cosmic meaning in everything. I think we just took that song as far as we could, then someone else was supposed to come along and pick it up.”

Stories of how Prince wrote “I Feel For You” due to his admiration for jazz-funk icon Patrice Rushen will never get old, but the song collected dust on his self-debut record until Chaka Khan injected her own formula into it. Her version had a lot going for it, including Stevie Wonder’s harmonica playing, Melle Mel serenading Khan, the list goes on. But what can’t be denied is the dance floor energy it exudes, dripping with an exquisite groove from start to finish.

While “Stand Back” was a product of Nicks’ diligence in getting that solo career streak she dreamt of, the Fleetwood Mac siren credits Prince due to his vital contributions to the song. The story goes that Nicks and her new husband, Kim Anderson, were on their way to their honeymoon when Prince’s “Little Red Corvette” blasted on the radio. They pulled over by the side of the road and Nicks started writing “Stand Back” right then and there.

She called Prince to tell him the story of how the song came to be, and within 20 minutes, the Purple One was at her door. Nicks recalls he helped himself to the synthesizers and was done in a little over 25 minutes, creating something that would have a lasting impact on the Fleetwood Mac siren.