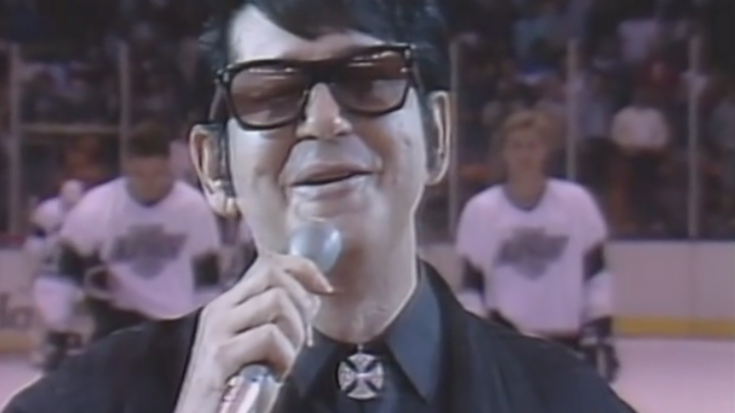 There’s just nobody better suited (pun intended) to sing a classic tune. Roy Orbison is the Caruso of Rock, the genius songwriter, and one of the most distinguished voices in music. His voice was in the three octave range. In the music business, that’s a “glass-shattering falsetto.” Orbison’s singing inspired one of the most famous rock stars to have lived. Elvis Presley admired Orbison so passionately that he called him “the greatest singer in the world.” It’s hard to disagree with Presley on that one.

And The Crowd Goes WILD

Usually, an audience applauds at the end of a performance. The hockey fans (and probably Roy Orbison fans) started clapping at various points at his song. At just about every single falsetto the rock legend would hit, there was whistling and wooing. I wouldn’t be surprised for a heartbeat, if people forgot they were at hockey game.

That October of 1988, the Los Angeles Kings were competing against the Detroit Red Wings during a home game. It almost didn’t matter who won because the real winner was Roy Orbison. He was in the swing of a ragingly successful come back.  The Caruso had just suffered devastating family tragedies years earlier. For the sake of closure to all hockey fans out there, the LA Kings beat the Detroit Red Wins 8- 2. But remember, Roy Orbison won the whole night.