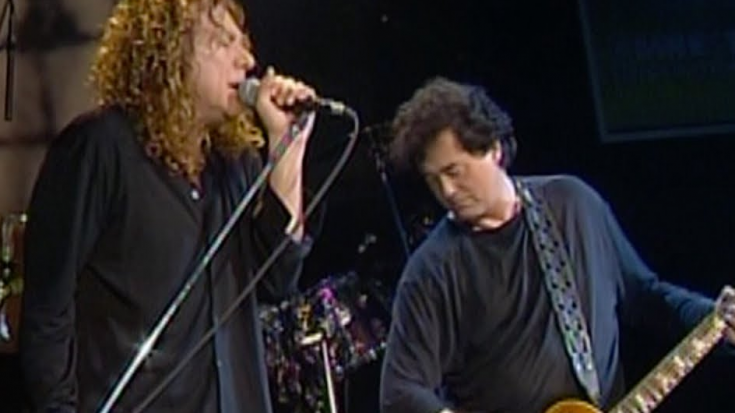 After the tragic loss of John Bonham in 1980, Led Zeppelin disbanded. The group broke up out of respect for one another and never reunited to ignite the fire – except on multiple occasions. One occasion would be the 1985 Live Aid, the first reunion of the remaining members following the death of Bonham.

On the other hand, the course of events diverged from expectations. Numerous factors contributed to the show’s failure, but Jimmy Page placed most of the blame on Genesis’ drummer, Phil Collins, who joined the group as a temporary replacement. However, Robert Plant admitted that Led Zeppelin conducted auditions with another drummer in an attempt to rejoin, despite the band’s notoriously difficult working relationship after Bonham’s death.

Since Bonham was a force that no one could compare and replace; Zeppelin had to hire two drummers to fill in his role. That became Collins and Tony Thompson, a member of the supergroup The Power Station. Robert Plant confessed to Rolling Stone in 1988 that Led Zeppelin had privately rehearsed with Thompson a year after Live Aid, thus it was clear that they enjoyed the latter’s performance and largely blamed Phil Collins for the terrible show.

“We had a week together with Tony Thompson,” Plant explained in the interview. “This was the following January, ‘86. The guy who’s now my tour manager was brought in to look after the drums, to help Tony Thompson leave Heathrow Airport and travel to this secret destination.”

Recalling why the reunion never went to fruition, he explained further: “Pagey duly arrived, and we plugged in. “As much as he wanted to do it, it wasn’t the time for Pagey to do that. He had just finished the second Firm album, and I think he was a bit confused about what he was doing.”

It would’ve been nice to see Led Zeppelin up and working once again, but some things are better left just the way it was. Lucky for us, the band gifted us with another mind-blowing reunion that occurred during Atlantic Records’ 40th anniversary; this time with Jason Bonham, filling in his father’s spot in the group.