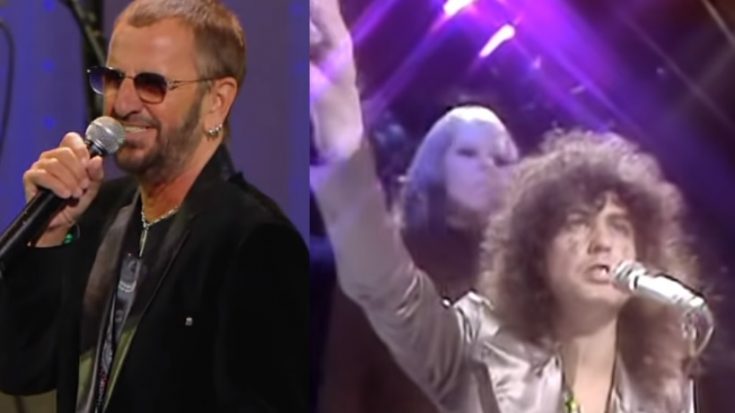 “People knew him as a great musician, a songwriter, a guitarist. But he was also a poet, and he was very proud of that,” the former Beatle said of the band’s late frontman, Marc Bolan. “He was always telling me that he was the No. 1-selling poet in Britain. In fact, his poetry was as important to him as his music.”

Starr, who is is a Rock Hall inductee himself (twice), also commented on Bolan’s unique personality, which had a great impact on the band and the culture they influenced thanks to his glam-rock vision. “He had great style and was really unlike anybody else I had ever met. He was a great performer, just incredible,” he said.

He directed the 1972 concert film Born To Boogie, which includes T.Rex and Elton John’s appearances. Starr said it was an enjoyable experience and of how Bolan shone in the movie, saying: “That’s why I called the film we did together Born to Boogie – because he really was. I told Marc, ‘I’ll bring the camera and everything else. You just bring yourself.’ We had a lot of fun together; I remember lots of laughter.”

Starr helped honor the band’s effort in elevating the quality of music with their offerings. “We lost [Bolan] way too young, but in his short life he made over 12 albums that are as far out and ahead of their time as he was. With the help of Tony Visconti and his band T. Rex, Marc’s style started a lot of trends,” Starr said.

He added: “They called it glam rock, with singles such as ‘Get It On,’ ‘Children of the Revolution’ and, of course, ‘Born to Boogie.’ But it was always just great music to me. And that’s why people are still listening to T. Rex today. There’s no doubt they belong in the hall of fame, finally. And I’m very proud to welcome them in right now.”


Accepting the award was Bolan’s son, Rolan, who said, “I really think my dad was put on this earth, not only to play music, but to show off his unique magnetism and charisma. He took inspiration from American music, but formulated his own persona and sound.”


“As I reflect on this incredible honor,” Rolan continued, “I think about how I really didn’t have a chance to know him very well. He was taken away from all of us so early in his life. I discovered his music pretty much the same way you have – through my eyes and my ears.”


“When I was a kid watching MTV, Def Leppard’s ‘Rocket’ video came on, and had clips of T. Rex’s performance of “Get It On.” That was my daily hello to my father. When I saw GNR and Slash was wearing his ‘Slider’ T-shirt, and looking just like my dad, I had to check out the Slider album and discover the T. Rex sound for myself. I know my dad would be very proud to receive this. He always aimed for the top, and here he is now,” he reflected.

2020’s Rock Hall inductions were supposed to take place in May in Cleveland but were moved due to the pandemic. The award-giving body instead opted for a virtual induction ceremony in a prerecorded TV special, where artists and bands like Doobie Brothers, Nine Inch Nails, Depeche Mode, Whitney Houston, and Notorious B.I.G. were honored.