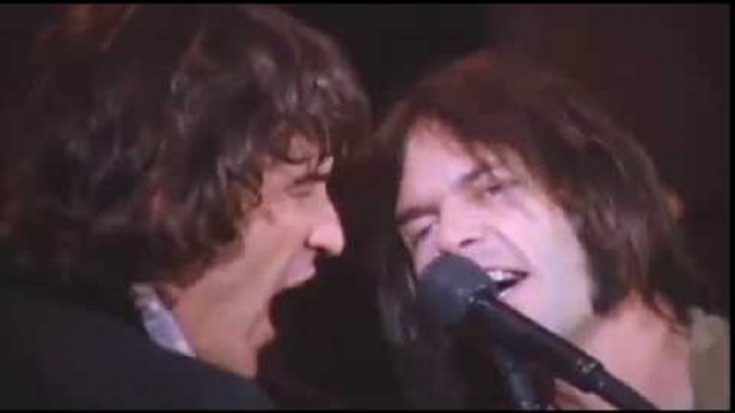 Today, we’ll be looking at a fantastic cover of “Helpless” by Neil Young, Joni Mitchell, and the Band on what would turn out to be one of music’s most-celebrated crossovers in the spotlight.

The video is a clip from Martin Scorsese’s documentary “The Last Waltz” where it details the finale concert of The Band held at the Winterland Ballroom in San Francisco, CA on November 25th, 1976 – Thanksgiving Day. It featured a handful of prominent musicians including Ringo Starr, Ronnie Wood, Eric Clapton, and even The Band’s former employer, Bob Dylan. Such lineup proved to everyone that this farewell show would in turn be a memorable one for the group.

While the abovementioned artists shined brightly on centerstage especially with the reunion of Dylan and The Band, one highlight worth noticing as well as during the latter’s performance with Young and Mitchell, covering a Crosby, Stills, Nash & Young classic, “Helpless” from their seminal album Déjà vu.

Written by Young and originally released while he was still on his band Crazy Horse, it quickly became a favorite, and Young included the song as a staple to his concerts. “Helpless” is the perfect choice for a performance you’d by dying not to see.

The show was flooded with so much passion and chemistry that you could hardly notice Young as a guest, but rather he’s a part of the recurring ensemble. Along came Mitchell then, the glue that stuck them together, with her pitch-perfect voice that blended well with the rest of the musicians for the night.

You can watch it below.